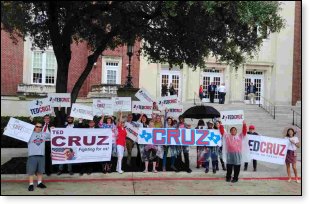 Hello America! My wife Mary and I are in Texas with the Conservative Campaign Committee campaigning for Sen Ted Cruz.

Thus far, democrats have poured $23 million of anti-Trump money into flooding the airwaves with O'Rouke TV ads. The race continues to tighten, Cruz leads from 1% to 9% in the latest Quinnipiac Poll. A recent Reuters poll has O'Rourke ahead by 2%.

The good news is Cruz continues to gain support. He is endorsed by President Trump, the NRA, Tea Party Express, Conservative Campaign Committee and numerous other conservatives. The key is voter turnout. We must get every Texan who wants to keep Texas red to the polls.

Folks, I must tell you that the evil coming out of the democrat party is hideous. Cruz's democrat opponent, Beto O'Rourke outrageously said Law Enforcement is "the new Jim Crow." https://t.co/Ki8XBrYyj0

When democrats lie to black Americans telling them that cops routinely assault and murder them, innocent people die. Cops are ambushed and assassinated. O'Rourke is vile, irresponsible, insidiously divisive and evil for making such a hate and violence inciting lie. The fact that O'Rourke is willing to spew lies, in essence, sacrificing the lives of police officers to win the votes of extreme leftists and angry blacks confirms O'Rourke must never be allowed anywhere near a seat of power. In my opinion, this is everything we need to know about this operative of socialism and racial division.

Despite proof that black repeat criminal Michael Brown was shot while assaulting a police officer https://bit.ly/2zo0Pf8 , democrats and fake news media continue to irresponsibly promote the lie that Brown was shot by a white racist cop while trying to surrender with his hands up. Research confirms that police are really the greatest defenders of black lives. https://bit.ly/2pt2quf And still, a majority of my black relatives still believe democrats' and fake news media's lie that cops unfairly target and gun-down blacks. How can democrats and fake news media sleep at night knowing their lie to further the cause of liberalism is directly responsible for the murder of cops; separating fathers from their children?

Beto O'Rourke rabidly supports NFL players disrespecting our flag, military and National Anthem. O'Rouke boldly stated that given the opportunity, he would vote to impeach Trump. O'Rourke is an extreme leftist who seeks to disarm not only Texans, but all Americans. Getting rid of Immigration and Customs Enforcement (ICE) is another O'Rourke extreme leftist position.

I cannot express enough the importance of our side getting out the vote for Ted Cruz. Fueled with Trump resistance hatred and rage, democrats are highly motivated to find votes for O'Rourke; be they from illegals, dead people or elsewhere. The American left seeks to halt Trump's America-First agenda by any means necessary; at any and all cost.

As I stated, pure evil is fueling the American left's deplorable political schemes and fake news media's deceptive reporting. Watching TV in my hotel room here in Texas, leftists' attempts to high-tech lynch Brett Kavanaugh, a good, decent and honorable man, is testimony of the depths of the American left's evil. Not only do leftists seek to keep Kavanaugh off the Supreme Court, they seek to totally destroy his character, life and family.

The evil force driving the democrats is real. "For we wrestle not against flesh and blood, but against principalities, against powers, against the rulers of the darkness of this world, against spiritual wickedness in high places." Ephesians 6:12

Hijacked by leftists, the democrat party has become at war with all things wholesome and good; attacking our nation as founded, our traditions, principles and values; attacking God's original plan for marriage, family and sexuality. In a nutshell, if God's Word says something is good, democrats hate it. Democrats are hellbent on criminalizing speaking biblical truths and opposing leftist's socialist/progressive agendas.

We know democrats' modus operandi is to pull every illegal, immoral and lie-based dirty trick under the sun to destroy Conservative/Republican candidates. This is why it is so frustrating when wimpish Republicans allow democrats/leftists to twist or ignore the law to defeat and destroy the lives of our candidates.

Ted Cruz is an awesome conservative warrior and hero; one of the truly brilliant good guys. Trump desperately needs Cruz to remain on his team in Washington DC. Please go online and show your support for Senator Cruz at his website: www.TedCruz.org

Here's a little Conservative Campaign Committee team inside info folks. Like the "Mission Impossible" movie teams, our executive director compiles a team with varying skills and expertise from around the country. For our Reelect Ted Cruz campaign, Mary and I along with other select team members were flown into Dallas. We piled into an SUV and rode 7 hours to Amarillo. Friday, we rode 7 hours back to Dallas for the Cruz/O'Rourke debate. I hate the long car rides, but love my country. While we were in the SUV, a team member received a phone call from her husband who was back home comforting a dear friend of their family who is in hospice. It was touching overhearing our team member saying her final goodbye to their friend.

My fellow Americans, please join us in this crucial election to score a victory for Ted Cruz, Trump, Texas and America. https://bit.ly/2MUCJvN