February 28, 2020
My wife Mary and I are having a wonderful time at CPAC, Wednesday Feb 26-29th, reconnecting with patriots and Tea Partiers we have not seen in years. We are promoting the release of the Trump Train 2020 song music video. We ask each of you to host Watch Parties when the music video goes live on Youtube. Here is the commercial promoting the music video release on Tuesday, March 3rd at 11:55am.

First of all, I was struck by the huge number of young conservatives in attendance. I met two people who really excited me.

Ben LaCross is author of "Tucker for President" written to teach conservative values to middle school students and educate them about how elections work. Those who read my articles know I have ranted for years about how we have allowed progressives to dominate public education. This is why we have a generation of Bernie Bros who believe they are entitled to what others have sacrificed and worked for. Ben LaCross' book is an awesome way to begin taking back our kids. Please show Ben some love: Like "Tucker for President" on Facebook: facebook.com/tuckerbooks.

Here is a short video Mary shot of me interviewing Ben. www.benlacrossbooks.com/

The second person who excited me was Kim Klacik, a young black conservative Republican woman running for congress in Baltimore, the rat-infested district of the late Democrat Elijah Cummings. I'm from Baltimore. It is always exiting to meet fellow blacks who are not brain-dead zombies for the Democratic Party. Mary shot a short video of Kim explaining to me what prompted her to run and why she is not a Democrat. Here is the link. www.kimkforcongress.com 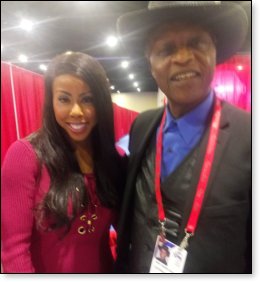 Seeing so many young people at CPAC is really encouraging folks. Fake news media would have us believe that all millennials' support killing babies even after they are born and support Bernie Sanders confiscating everyone's earnings for redistribution. Trump was correct in saying young people are the heart of the pro-life movement.

Young people are fired up to take back America. We have surrendered too many great traditions and institutions to progressives.

Years ago, I wrote an article advising the Boy Scouts not to allow openly homosexual scout masters. Isn't that like allowing a fox into the chicken coop? I was chairman of a conservative PAC. Progressives/LGBTQ enforcers immediately pounced, branding me and anyone associated with me a homophobe and a hater. A congressional candidate was attacked for allowing me and my PAC to work on his campaign.

I do not care about what progressives say or think of me. They've been calling me an Uncle Tom, self-hating and stupid n***** for decades. However, I did struggle with guilt over candidates being harmed by association.

Mary and I concluded that it would be best for me to resign from my chairmanship to continue fighting the good fight independently; spreading truth as the Lord leads. Then, all of the attacks will be targeted at me only. God's Word says, "No weapon formed against me shall prosper."

The Boy Scouts of America has filed for bankruptcy due to an overwhelmingly huge number of sexual assault (pedophilia) lawsuits. Upon hearing the sad news, I flashed back years ago to a Facebook post by an angry mom. She vowed to remove her son from the "hate group" if they did not admit openly homosexual scout masters.

LGBTQ activists said we were hateful and paranoid for thinking they would change the 100 year old historic institution founded on Christian principles. And yet upon entering the BSA, homosexuals' first act was to demand that "morally straight" be deleted from the Scout Oath. Then, activists demanded that "boy" be removed from the title and that they admit girls.

Since its founding in 1910, around 110 million Americans participated in BSA programs. The BSA mission was to "prepare young people to make ethical and moral choices over their lifetimes by instilling in them the values of the Scout Oath and Law." Now, the BSA will probably close their doors. Another great American institution will have bitten-the-dust due to surrendering to LGBTQ enforcers' bullying and incrementalism.

We are not in a battle in which Democrats and Republicans simply have different views regarding how best to serve America. We are in a battle of good vs evil; a battle for the heart and soul of America.

As a Christian, black Conservative, and Republican, my activism is my ministry.

Mary and I are boots on the ground at CPAC and lovin' it!