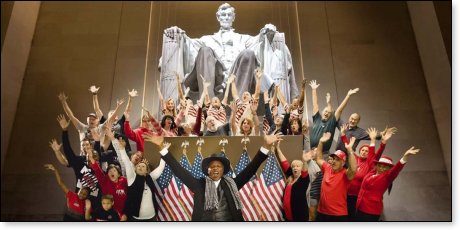 My wife Mary and I attended CPAC conservative convention to promote the release of my new Trump Train song and music video.

While most people at CPAC are excited to meet members of Congress, I tend to gravitate to vendors, authors, and everyday patriots in attendance. Among the many vendors selling Trump gear, Mary had to have a "Trump" purse shaped like a Coke can. Mary shot a short video of my interview with Mary Lou, the vendor. 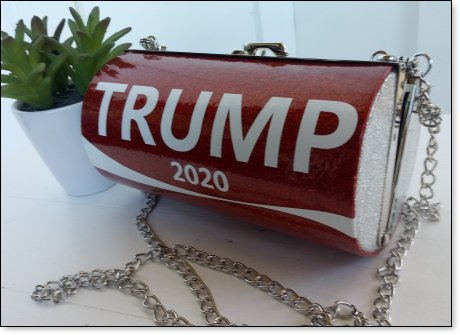 One of the most creative things I saw was the Trump hammocks. Enjoy this short video of my interview with Steve, the hammock designer.

I sat in on a breakout session by Young Conservatives for Carbon Dividends. Their point is progressives own the climate change issue. They believe that to win the millennial vote, Republicans must come up with their free-market solution to the problem of climate change. While I understand their thinking, I have a problem surrendering to the lie that man can control the climate. I covet your input.

A drag queen wearing a patriotic themed outfit; big blonde wig, miniskirt, and knee high boots drew attention at CPAC. Some folks gathered to take a picture of themselves with the drag queen.

Amid the throngs, black conservative radio show host Lonnie Poindexter and I spotted each other. We embraced. Like me, Lonnie has been unable to break his black family and friends' loyalty to the Democratic Party. He excitedly reported a tide change. Abortion and the aggressive bullying by LGBTQ activists is causing blacks to finally turn away from Democrats. Lonnie introduced me to a new political term, "leaner." Leaners are people who lean in close to whisper into your ear that they are voting for Trump.

Back in my hotel room, Democrats and their fake news minions were all over TV despicably trying to cause Americans to panic over the coronavirus. Proving once again that they do not care about American lives, Democrats view the virus as a golden opportunity to sell their lies that Trump does not care, Trump is incompetent, and Trump must be removed from office for the safety of America. Democrats and fake news media are joyfully awaiting for Americans to begin dying from coronavirus.

Even more disturbing was watching talking heads on our side attacking Trump for firmly calling out Democrats' cold, calculated, and irresponsible politicizing of the situation.

Over the past three and a half years, the behavior of the Democrat-controlled House of Representatives led by Nancy Pelosi has made it abundantly clear that they only have one agenda item. It is to remove Donald Trump from office by any means necessary. Democrats, and their fake news media minions have deemed undermining whatever is good for America, and even sacrificing American lives, acceptable weapons to achieve their goal. Therefore, these people are evil and extremely dangerous.

Given this shocking truth, it blows my mind that people on our side still criticize Trump for pushing back hard against Democrats' and fake news media's outrageous accusations. Establishment Republicans want Trump to express his displeasure with dignified presidential politeness.

Meanwhile, Democrats get to spew whatever vile, evil, hateful lie that comes out of their hearts with impunity. Twenty-four-seven fake news media promotes absurd accusations like Trump wants you dead, Trump is racist, and Trump lies about everything. Talk about the pot calling the kettle black, Democrats are guilty of every accusation they launch against Trump.

I say, let Trump fight our Democrat giant-enemy-within in his own way. When young David stepped up to fight Goliath, the giant in the Bible, King Saul offered David his battle tunic, his sword, his armor, and a helmet. But they were too heavy and awkward. David said thanks, but I'm going to fight him my way with my trusty slingshot. David defeated Goliath.

God has prepared Trump for such a time as this. Though unconventional, Trump continues to win unprecedented battles against progressives for We the People. I feel comfortable allowing Trump to be Trump, courageously fighting for us in his own way.

One principle Trump understands is that the aggressor sets the rules of engagement. Trump fights his opponents with equal or more force. I love that he is suing the arrogant New York Times. Win or lose, Trump is pushing back against fake news.

For years, We the People have been frustrated by Republicans like Mitt Romney who foolishly persist in bringing an olive branch to engage in policy battles in which Democrats bring guns, flamethrowers, machetes, and grenades.

CPAC was really encouraging, folks – tons of young people, college students, and millennial conservatives. It was surprising to learn that for many of them, their conservative values are an outgrowth of their Christian faith. The big message of CPAC was "Trump 2020!"