January 9, 2020
In the short aftermath of the surgical precision with which the world was rid of the evil terror mastermind was the predictable apoplectic response from the Communist News Network, CNN. In particular, Anderson Cooper and Fareed Zakaria compare Iranian General Qassem Solemani and his Terror network with French Soldiers and Charles de Gaulle. Zakaria's Hitlerian/Trump perpetual comparison was in full glory while Anderson ignored the decades long extermination of Iranian gays.

In so doing, Mark Twain's "Never let the truth get in the way of a good story" or the Gaelic Version "Sin mo scéal díobh, agus má tá bréag ann, fá é, Mar ní mise a chum ná a cheap." "That's my story and if there's a lie there, so be it, For it wasn't me that composed it."; has been contorted into the (Globalist), "Goebbelesque trick of promising different things to different sections of the population in the hope that the election would be over before they could compare notes." I have replaced State with Statists in the following attributed to Goebbels.

"If you tell a lie big enough and keep repeating it, people will eventually come to believe it. The lie can be maintained only for such time as the Statists can shield the people from the political, economic and/or military consequences of the lie. It thus becomes vitally important for the Statists to use all of its powers to repress dissent, for the truth is the mortal enemy of the lie, and thus by extension, the truth is the greatest enemy of the Statists."

It is with great apology to Yamamoto that I made the comparison between Harvard educated Admiral Isoroku Yamamoto and the twelfth Imam believing1 Terrorist Soleimani who can only dream of the nuclear annihilation of Israel with his virgin cohorts unless he is roasting himself in Hades. While Yamamoto planned the attacks on Pearl Harbor, He advised against them and later wrote in his diary "I fear all we have done is to awaken a sleeping giant and fill him with a terrible resolve." The sole reason for the Soleimani/Yamamoto comparison was Operation Vengeance.

For those of you who have limited WWII history. Operation Vengeance is concisely described here https://nationalinterest.org/blog/buzz/killing-yamamoto-how-america-killed-japanese-admiral-who-masterminded-pearl-harbor-attack

A flight of US Army 38's designed by "Kelly" Johnson , (the General Atomics MQ-9 Reapers of the day) that the Germans called Gabelschwanz Teufel – "Fork-tailed Devil," carried out as well planned and surgically precise attack on Yamamoto as was carried out against Soleimani:


The events of the past year were on the verge of escalating into another Pearl Harbor, Tehran Embassy Occupation and Benghazi wrapped into one. Japan was not in a state of war with the USA when Pearl Harbor was attacked. However, there has been a state of conflict between the US and Radical Islam's primary sponsor of terrorism, Iran, since Jimmy Carter, misguided by media propaganda, aided the creation of the current Iranian Islamofascist theocracy of which Soleimani has been its bloody extraterritorial Scimitar. By coincidence, Yamamoto called himself the sword of Japan's Emperor Hirohito, claiming he was going to ride down Pennsylvania Avenue on a white horse and dictate the surrender of the United States in the White House.

The US would have started a war had Yamamoto been taken out ahead of Pearl Harbor and ample evidence exists that "Soleimani helped plan Benghazi jihad massacre of American diplomats" for these crimes Donald Trump has wrought swift and legitimate vengeance to try and reverse "the Damage of Jimmy Carter" seek retribution for Benghazi, dry up the Obama-era cash traced to Iran-backed terrorists (via the Quds force) culminating in the termination of diabolical mastermind Qassem Solemani who posted the following on his Instagram account (a far cry from Yamamoto suggesting arriving on a white horse): 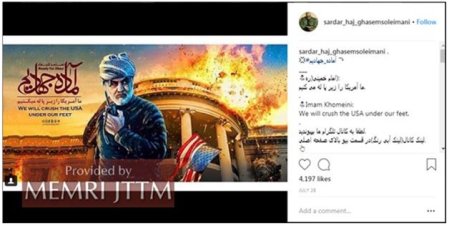 In the closing year of the Obama Presidency, the Jerusalem Post announced that Radical Islam has just won its second war against America. Now with all this CNN propaganda and rhetoric, Anderson Cooper and Fareed Zakaria, unlike the Jerusalem Post, never asked "Who was Abu Mahdi al-Muhandis, killed in US airstrike with Soleimani?". I also highly doubt that either Cooper or Zakaria have ever read Canadian Human Rights Activist Yasmine Mohammed's book "Unveiled: How Western Liberals Empower Radical Islam".

It is sad that the voices of the Yasmine Mohammed's, Ayaan Hirsi Ali's, Brigitte Gabriel's, and Malala Yousafzai's are drowned out by the Islamists who are celebrated by Western Liberals while "Iqra Khalid succeeds in getting the Camel's nose of Islamophobia into the tent of Free Speech" (My article worth reading again). Those voices are also drowned out by the likes of Linda Sarsour, Rashida Tlaib and Ilhan Omar; who in particular said "CAIR was founded after 9/11 because they recognized that some people did something and that all of us [Muslims in the U.S.] were starting to lose access to our civil liberties." Note that CAIR is an unindicted co-conspirator in Holy Land terror funding trial and It is also worthwhile reading this article: Obama and CAIR [incl. Ingrid Mattson] by Brigitte Gabriel.

When the Iran Hostage Crisis (as was covered in the movie Argo) was going on, then Canadian Prime Minister Joe Clark and Minister of External Affairs, Flora MacDonald brought Pierre Trudeau, who was then the Leader of the Opposition, into their confidence about the six U.S. houseguests being secretly sheltered by the Canadian Embassy. Trudeau the elder called on Clark and MacDonald in Parliament to issue a public statement of support for the U.S. "He played politics," charged Carole Jerome, a former CBC journalist who covered the crisis, in the film Argo. The video of Trudeau playing politics is here:

Despite Speaker Pelosi's outrage that Congress was not consulted in advance on the plans to take out Solemani; She (or Kerry or Feinstein et al) would have done far worse than Trudeau the Elder. It is abundantly clear that Ilhan Omar's (and others) sympathies are anti-Semitic & pro-Islamist and Omar's unprecedented position as a freshman on House Foreign Affairs Committee would have threatened the strike on Soleimani. Imagine if Sempill or Rutland "The Traitor(s) of Pearl Harbor" were "read in" on Operation Vengeance?

The Obama Regime began with a world apology tour and 10 outlawed Muslim Brotherhood members were given front row seats at the "A New Beginning" speech at Cairo University on June 4, 2009. I was in Egypt in the spring of 2009 before the speech and again in December of 2012 after Benghazi and in the midst of the Cairo riots. I witnessed the role played by the UN and other Globalists in those events. (Details too complex to discuss here). By that time Muammar Gaddafi, who had previously disavowed terrorism and two years before the Sept 11, 2001 attacks and pledged Libya's commitment to fighting Al-Qaeda was already taken out by the Islamists emboldened by the Soros funded Arab Spring also aided and abetted by the Clinton State Department. See "Hillary Emails Reveal NATO Killed Gaddafi to Stop Libyan Creation of Gold-Backed Currency"

In "How Obama Secretly Gave Iran Access To Billions Of Dollars – And Enabled Terrorism" the final chapter of the Obama legacy is clear; aiding America's Ideological Enemy, Radical Islam. Yet none dare call it Treason, while Communist voter and alleged Muslim Convert John O Brennan stated the Trump-Putin press conference "nothing short of treasonous". while conveniently forgetting Barack Obama's open microphone gaffe with Dmitry Medvedev. The world is far less safe since Jimmy Carter turned Iran over to the Mullahs, especially after 8 years of Obama and much of this rise in Islamic Extremism and terrorism in the 20th Century is due to the actions or inactions of previous Leadership or the lack thereof, President Trump is genuinely trying to reverse that with a minimum of collateral damage.

As the Treaty of Versailles was being signed to end WW1, Ferdinand Foch, French general and Supreme Allied Commander during the First World War said: "This is not peace. It is an armistice for 20 years"; much of the blame was laid at the feet of British Prime Minister, Liberal David Lloyd George and US President, Progressive Democrat Woodrow Wilson. We do not know what would have happened in WW2 had Yamamoto not been taken off the Chess Board but note the Japanese lost every subsequent engagement.

Had Douglas MacArthur's order to bomb the bridges across the Yalu river to stop the Communist Chinese advance into North Korea not been overridden by Democrat President Harry Truman and MacArthur subsequently dismissed, we would not be dealing with a nuclear armed North Korea today and possibly not a nuclear armed China. Then recall "Flashback: Bill Clinton gave China missile technology" considering "Iran Has Amassed the Largest Ballistic Missile Force in the Middle East" Thanks to North Korea, China and a few others. by Zachary Keck. Then we have "The Spy Who Drove Her: Dianne Feinstein and Chinese Espionage"

I have written several previous articles about Islamists attacks in Paris, "Je suis Charlie" and Ah, you don't believe we're on the eve of destruction? I referenced another article in the past "Iran and the Shah: What Really Happened" by James Perloff in the New American, I suggest you read it. I have quite a few 'Iranian in exile' friends who vouch for the veracity of Perloff's article and if you read it you will see that there are Ominous Parallels between how President Trump has been treated by the Democrat/Media complex and the scorn/misinformation heaped on the Anti Communist Shaw of Iran that lead to the current state of affairs 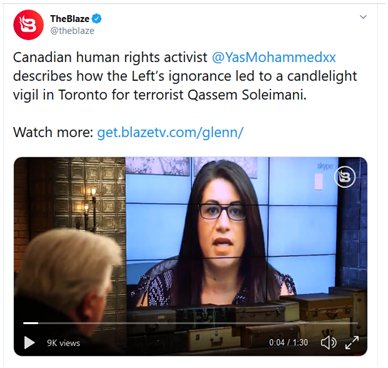 Canadian human rights activist Yasmine Mohammed @YasMohammedxx was interviewed on Blaze TV where she describes how the left's ignorance led to a candlelight vigil in Toronto for terrorist Qassem Soleimani. https://twitter.com/i/status/1214603883546370048. A quote from her interview with Glen Beck "Leftist here are sharing Iranian Regime Propaganda." Take for example Michael Moore's apology to the Iranian Regime and statement that
The views expressed by RenewAmerica columnists are their own and do not necessarily reflect the position of RenewAmerica or its affiliates.