Desmond McGrath
What are Donald Trump's motives?
Or are the motives of his opposition more of a threat?

January 31, 2020
A friend Marilyn from Newfoundland I have known for 40+ years, a staunch anti-Trump person asked me What do I think Donald J Trump is in Politics for? There was once a time we could discuss politics over a beer at Martha's on Water Street those 40 years ago but now everybody is hypersensitized and easily twitter-triggered by Fake News sound bites. You can look at archived videos/articles of Clinton, Pelosi, Schumer, Biden, Obama, (The list goes on) and they all sound like John Kerry "For It (Before He Was Against It)," they change their positions so many times that they have no long held unifying principles and are merely in Politics for the sake of perpetual power and profit from politics. Being economical with the truth, pathological lying or practicing Taqiya for the Gospel according to Marx, most of you are not strong enough to peer into these Hearts of Darkness or ever read Dr Bella Dodd's "School of Darkness"

You can look at a Rona Barrett's interview of Trump in 1980 or Oprah Winfrey's of 1988. The Donald's message was the same as it was in 2016. Exclusive: Trump list shows 319 'results' and promises kept in three years. He never ran for Political Office before and beat the best that the Republicans put up and defeated Hillary Clinton. A non-politician against career politicians. His spending was 1/3 of Clinton's and ¼ of Obama's yet he won. He accomplished this despite Mitt Romney's VP Candidate Paul Ryan running interference against Trump for the first two years of his presidency. Were Paul's Ryano buddies working for we the people against an erstwhile monarch/tyrant or working for the Globalist Elites, Trump had in his crosshairs and their own vested self-interests? 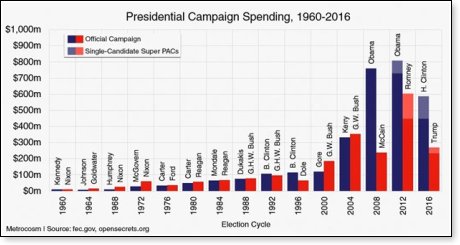 Despite Rolling Stone saying "Donald Trump Is the Mad-King President Our Founders Feared Most" Governor Northam of Virginia is trying to implement gun control so draconian that counties are voting to be 2nd amendment sanctuary areas; and now Virginia politicians push bill to make criticizing state leaders criminal offense. This is no different than Ezra Levant now being prosecuted for his book "The Libranos" see NEWS HIDDEN CAMERA OF POLICE INTERROGATION OF EZRA LEVANT OVER A BOOK ABOUT JUSTIN TRUDEAU. If you have seen the movie Richard Jewel and thought about the attack on Trump and Ezra Levant; who should you fear more? Trump or the Government Establishment? How many of you Anti-Trump Newfoundlanders/Canadians voiced any concerns about
The views expressed by RenewAmerica columnists are their own and do not necessarily reflect the position of RenewAmerica or its affiliates.