November 23, 2009
The Health Care Reform packages in both the House and Senate  in addition to putting the government between you and your doctor and legislating limitations that effectively ration care to those who need it, also impose massive tax increases.

For example, the Wall Street Journal plowed through the nearly-2000 page House version and reported that measure would stick an already ailing economy with a 69 percent increase in the capital gains tax.

Though peddlers of the class-envy card have tried to sell the cap gains tax as a justified levy on "the rich," in reality it is a job-killer that imposes a hardship on many more of the non-rich. It is arguably the most destructive provision in the tax code.

Where "supply-side economics" got its "legs"

President John F. Kennedy saw through the "soak the rich" scam and turned his back on the hate-the-rich rhetoric of his party's New Deal days. In so doing, he brought us what was then a record high in post-war prosperity.

As Mr. Kennedy observed: "The tax on capital gains directly affects investment decisions, the mobility and flow of risk capital from static to more dynamic situations, [and] the ease or difficulty experienced in new ventures in obtaining capital, and thereby the strength and potential for growth of the economy." 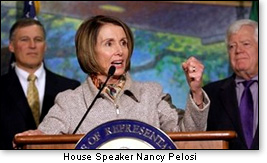 Speaker Nancy Pelosi and her water-carriers in the House passed a smoke-and-mirrors fig leaf tax that supposedly would "pay for" their government take-over of your and my health care with a 5.4% surtax on incomes above $500,000. The tax would be applied to both actual capital gains and dividends.

During the weekend, the Senate bill  advanced to debate in yet another "Saturday Night Massacre"  includes nearly a half trillion dollars in new taxes that will hit virtually every American, including middle income families earning less than $250,000 a year, thereby adding another log to a destructive economic fire.

Past experience has shown that every time you hike the cap gains tax, government revenues go down, because fewer investors are investing and fewer jobs are created. Thus, fewer are paying taxes. (Maybe candidate Obama was right in promising Americans most of them would not have to pay more taxes under his program. When you're out of work, you have no income. And if you have no income, you pay no income tax. See? He wasn't lying. He's keeping his promise. He just left out the details, that's all.)

The effective date of the House's "health care" surtax would be January 1, 2011. And what else happens on that date?

Corrrrrect! That is the day taxes that President Bush cut  down to their lowest throughout 2010  come roaring back. That means the capital gains tax for millions of stockholders (about half the population nationwide) will bounce up from 15% to 20%.

When you add that to the surtax for the top job-creators, it amounts to a 69 percent hike in one fell swoop. But it is not just for Cap Gains. Taxpayers will be socked with what amounts to a hike in the income tax, the death tax, as well as losing tax advantages for child credit, the ten percent bracket, and the 15 percent bracket for joint filers.

If you wonder why unemployment continues its upward spiral now, think of the investors who see all these tax increases coming and thus are holding back on job-creating ventures.

But it doesn't stop there

Waiting in the wings are the tax boosts (other than the one mentioned above) tucked away in the health bill House Speaker Pelosi rammed through by a paper-thin margin.

Grover Norquist's intrepid numbers crunchers at Americans for Tax Reform have cited 13 tax hikes in the House legislation  including those that will come down hard on Healthcare Spending Accounts and on working families, most of whom are among the 95% of Americans who supposedly will not see their taxes go up by "one dime," according to Obama. (Hey! The man's not lying. They won't go up by "one dime." They will go up by many, many dimes.)

Do you see the big "rich" bogie man coming your way? Then alkalize with a big tax rise, and he will go away!

The Democrats didn't always march to that simple-minded drumbeat.

In fact, when Republican President Ronald Reagan slashed taxes, including the income and capital gains taxes (and thus created 26 fat years) he was really picking up where John F. Kennedy had left off years earlier.

The Age of Reagan

The amazing story of how post-JFK Democrats and Republicans switched sides in the tax debate is told in penetrating detail by Steven F. Hayward in his just-released second volume of The Age of Reagan  The Conservative Counter-Revolution: 1980-1989. (The first volume in 2001 focused on the Fall of the Old Liberal Order, 1964-1980.)

If at first you succeed  reprise

In 1963, President Kennedy proposed cuts in income tax rates on a scale similar to those of the Reagan tax cuts two decades later. In fact, President Reagan got his tax program through Congress in part by recalling Kennedy's slogan: "A rising tide lifts all boats."

Kennedy told the Economic Club of New York in 1962 that the income tax system "siphons out of the private economy too large a share of personal and business power.... [It] reduces the financial incentives for personal effort, investment, and risk-taking." By contrast, lower taxes would raise revenues, he argued.

That was exactly the case presented by President Reagan's supply-siders.

There is ample evidence that the JFK tax cuts boosted supply-side capital formation and investment. "Growth in the gross domestic product accelerated to over 5%, more than a full percentage point above the long-term post-war growth of 3.4%," Hayward notes. "Capital spending jumped by a third in the first two years after taxes were cut; the personal savings rate increased 50 percent  the amount saved was greater than the cash declared by the tax cut itself."

And then this: After the tax cut, taxes paid by those earning more than $50,000 (equivalent to about $135,000 in 1981) increased nearly 40 percent between 1963 and 1965. Because they invested more, they earned more, so they paid more in taxes despite the lower tax rate percentage.

Lawrence B. Lindsey  President Reagan's top tax analyst at the White House Council of Economic Advisers  argued that under the Kennedy tax cuts, "high income taxpayers reported so much taxable income that more revenue was collected under the lower tax rates than would have been collected under the higher tax rates prevailing before the tax cut."

Down with growth  full speed ahead into the pit

Ah! But you see, by the time Reagan entered the White House, the Democrats had flipped from being pro-growth to the socialist doctrine of equally-shared misery. JFK's "rising tide lifts all boats" had been discarded. In its place was their mantra of condemnation of affluence (except for wealthy liberals, that is).

President Jimmy Carter spelled it out for all to hear when he advocated rationing scarcity: "I think it's inevitable that there will be a lower standard of living than what everyone had always anticipated."

Ted Kennedy: My brother didn't do what he did

Senator Edward "Ted" Kennedy and other demand-side Keynesians of the JFK-era took great umbrage at President Reagan's citing the legacy of John F. Kennedy in pursuit of "Reaganomics."

"What they [the Reaganites] don't tell you," the younger and more Marxist-oriented Kennedy complained, "is that inflation was then 2 percent, and today it is at 12 percent." The Reagan tax cuts would generate roaring inflation, the Kennedy veterans charged.

But in actuality, under the Reagan plan, inflation was kept in check. A man who now has President Obama's ear on the economy  Paul Volker, then the Fed chairman  played a role in that Reagan move. One would think he could insert some pearls of wisdom into the head of the current White House occupant unless Mr. Volker views that as a waste of his breath.

In the 1980s, Kennedy advisor Walter Heller argued that "there is no scientific evidence that [the Kennedy tax cut] paid for itself."

But in the 1960s, Heller had boasted the tax cut in fact "was the major factor that led to our running a $3 billion surplus by the middle of 1965 before the escalation in Vietnam struck us."

The Democrat switch from pro-growth low-tax in President Kennedy's time to the no-growth high-tax circumstance of President Carter's regime was matched in reverse by the Republicans.

In 1964, when the Kennedy tax plan went to Congress posthumously, Senator Barry Goldwater  who later that year would become the GOP standard-bearer  voted against the program. In his book The Conscience of a Conservative, Goldwater wrote, "I believe that as a practical matter, spending cuts must come before tax cuts" (an argument Senate Democrat Leader Tom Daschle would use against the Bush tax cuts in 2003).

However, in 1981, Goldwater would vote for the Reagan tax cut, as the Democrats howled with rage against it. The process whereby the two parties exchanged positions with each other had completed its journey.

As for Obama today

The mammoth health care bills are being pushed through Congress in a race against time. The more Americans learn about the Senate and House bills  including the hidden and overt tax increases  the less they like them.

Even if the Democrats take a drubbing in the 2010 mid-term elections, they are confident they will have put in place the mother of all "entitlements" that they believe will give socialist-minded politicians a new foundation for future demagoguery, and (they figure) a permanent majority. Our debt will balloon beyond our wildest imagination, and tax cuts of any kind will be deemed a dead-letter.

Nothing short of massive, clearly-expressed outrage on the part of the electorate (now before it's too late) can prevent that dismal scenario. This is political warfare, with the America as we know it hanging in the balance.