Wes Vernon
The spoiled brat uprising: Bringing the Communist revolution to our doorstep?

"Occupy Wall Street" rioting is not a self-starter with bored white kids on a lark to rush the calendar for Spring Break (though some such "useful idiots" are in the mix). 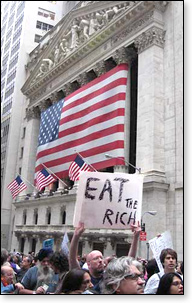 The whole operation — spreading from Wall Street to other cities — is organized by the Working Family Party, a front for the SEIU/ACORN, allied with Democratic Socialists of America. The attack on America has the backing of groups bankrolled by left-wing moneybags George Soros. All of these "usual suspects" are in-tight with the Obama Administration and the Democratic National Committee. They have been organizing this from Day One. It is anything but "spontaneous." Don't kid yourself.

Street brawlers imbued with class hatred propaganda are egged on by a President of the United States whose parents were followers of Marx, Engels, and Lenin.

The attack has been aimed squarely at the heart of the United States for decades. The Communist conspiracy — during and after the Soviet days — has never wavered from its goal of a Soviet-style America under the domination of a worldwide order.

For generations, avenues of public influence have nurtured a nest of potential insurrection, fueled in large part by the writings of the likes of a Communist liar named Howard Zinn (see this column "Howard Zinn, Communist Liar," 8/9/10 & "Is it Safe to Send Your Child to School?," 9/6/10). He and others like him continue to poison the minds of our young. Occupy Wall Street no doubt would bring an evil smile to the late Zinn and his ilk.

With the Hate America Left infecting institutions to which kids are exposed as they grow up, why should we be surprised that a Communist-brainwashed movement would surface damning the "unfairness" of a society that (gasp!) does not hand them their every need and wish?

Occupy Wall Street has forged what amounts to a 21st century Communist Manifesto that includes the following as sacrosanct "rights": 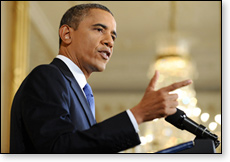 Of course, Obama would support the uprising. It is guided by his own shock troops.

The protesters, he intones, "are giving voice to a more broad based frustration" (translation: keep it up). This Marxist-nurtured "dear leader" talks about the day when his acolytes will "run Republicans out of town" (for their refusal to pass his phony "jobs" bill, a retread of past failures).

Off-the-charts street revolutionaries are echoing Mr. Obama's wailing at "millionaires and billionaires." That's what the self-righteous Marxists (admitted or disguised in respectability) really mean when they lecture the rest of us on "civility" (as practiced by his terrorist friends Bill Ayers and Bernadine Dorn, whose sixties movement included such lovely "civil" sloganeering as "Kill the rich! Kill your parents!).

The SEIU/ACORN thugs and ballot-stuffers use their sharp elbows while agitating for "rights" resembling the "demands" of every violent revolution in history that has led to jackboot governance — including 20th century Nazis and Communists or, for that matter, the Jacobins of the 18th century French Revolution.

On yet another front

Van Jones, meanwhile, concurrent with the Occupy Wall Street rampage this past week, conducted what he called a "Take Back the American Dream" conference.

Under Jones's interpretation, that very title represents a prostitution of the English language. But for self-described Communists such as Jones, Orwellian language is routine. Jones, recall, was ousted from his "Green Jobs" czar position at the White House, after he had been outed in 2009 by Trevor Loudon, Cliff Kincaid, and Glenn Beck. At that point, Jones — also a 9/11 "truther" — had to leave — not because the administration had any problems with his beliefs — but because he had become a PR liability.

Jones's latest venture is another ploy to distract you and me from the Obama administration's march toward the downfall of the United States.

"October is going to be the turning point when it comes to progressives [read Communists] to fight back," Jones crowed on left-wing TV. He envisions "an American fall, an American autumn. Just like we saw an Arab spring." (Great! Every indication thus far points go the "Arab spring" as a springboard for empowerment of the America-hating Islamist Muslim Brotherhood.)

What it's all about

Class hatred is the toxic thread that runs though Occupy Wall Street, the Obama administration's obsession with "the top one percent," and the collaboration of the hard left and radical Islam.

Many of us have seen people rise up from the depths of poverty to make a success of themselves and contribute to the betterment of society.

That experience leads to the conclusion that class hatred in our body politic is just plain evil.

The motive is very secondary. Class hatred is pure evil. Occupy Wall Street, SEIU/ACORN, Van Jones & "the American fall" — they want America gone as we know it. North Carolina's Democrat Governor Bev Purdue has proposed that we cancel congressional elections. Ominous and chilling. This is a war on the real American Dream. We are honor-bound to resist.