Wes Vernon
Romney: It's "his turn"? Why?

October 20, 2011
Not a single vote has been cast in the Republican presidential primary. Not one. Yet, the Republican Party establishment has decided for us that Mitt Romney is the 2012 anointed one. Why? Well, he's a veteran campaigner, or he has become a household name. Or some variation that leads to the bottom-line rationale that "It's his turn."

The GOP machine tries mightily to formulate the parameters of intra-party debate so that candidates gather in a virtual cartoon-depicted assembly line, each awaiting "his [or her] turn."

Let's give the GOP veteran operators their due. These are folks who have done much of the hard work to keep the party competitive and hopefully victorious more often than not. They have also raised a lot of money over the years.

The issue is not whether most of them sincerely pursue what they see as best for the party and the country. The problem comes with the track record of their maneuvering. Add to that the question of to what extent they are willing to cut too many corners on principle to achieve worthy goals, with disastrous results in electoral and/or policy issues.

Americans sense very keenly that their beloved nation is in deep trouble. Is it not understandable therefore that we would seek the very best person to oust the very worst president the voters — many now feeling buyers' remorse — elected to lead a truly great and decent nation?

Why then, a head-scratching visitor from Mars would want to know, are we — again — indicating a willingness to nominate a candidate for the opposing party nomination because it's "his turn?"

The Republican Party has been stuck in this rut for decades. Some examples:

In 1976, the unelected accidental President Gerald Ford was nominated because it was "his turn."

In 1988, Vice President George H.W. Bush headed the Republican ticket because it was "his turn."

The results of the above parade — with some variations — were "mixed" at best.

In fact, on one occasion when the establishment was actually defeated, the end result was one of the most successful presidencies in our history.

The GOP pooh-bahs went to great lengths to derail Ronald Reagan's bid for the 1980 nomination. The anointed one that year was George H.W. Bush. But the Gipper just hit the road and took his case to the people — with a clear-cut program of low taxes, reduced regulation and spending, and rebuilding of a badly demoralized military.

Governor Reagan out-foxed the establishment at Detroit. But the powers that be won a consolation prize. The former California governor was presented with a situation where he had to accept Bush as his running mate.

The price Mr. Reagan paid was that some influential Bush people who were included in his administration repeatedly nipped at his heels pushing for old-line proven failures in GOP governance. A weaker man would have caved. President Reagan stood by his goals, never taking his eye off the path he had set for his presidency.

Comes along Mitt Romney, a one-term governor of Massachusetts, successful entrepreneur, a great speaker, a winning smile, a pleasant personality (unlike his father, who considered a White House run in 1964 and 1968).

So what is there not to like about this man? This time, maybe it really is "his turn."

Or here we go again?

Romney has proven himself a smooth campaigner. He has the ability to convince. He says a lot of things that appeal to conservatives.

So when one examines what he has actually done over the years, as well as how or at what point in time he has "revised" or "added to" his positions, questions emerge as to how he would conduct business at the White House.

If you read a timeline of Mr. Romney's handling of the same-sex marriage and the "gay rights" issue generally, it is dead certain that your head will swim. He zigged and zagged, navigating between the hard boiled pro-gay marriage attitude of the Massachusetts Supreme Court (or the Supreme Judicial Court, as it is formally known) and the views of many of his constituents who — even in liberal Massachusetts — have problems with upsetting or reducing the value of the 6000-year institution of marriage. 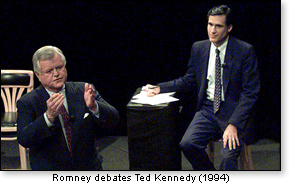 In 1994, when he ran for the U.S. Senate, Romney criticized his opponent, Senator Edward Kennedy, as lacking "effective leadership" on "gay rights." He promised to do better.

In 2002, when he headed the Salt Lake City Olympic Committee, Mitt Romney banned the Boy Scouts from participating. Thus, he caved to the expected threats of the ACT-UP types for fear of having to deal with noisy nationally-publicized demonstrations. Question: If he runs from principle when the "Mom and Apple" pie Boy Scouts are under attack for banning openly gay scout masters, how would he — as president — hold up under threats of nuclear blackmail?

As governor, Mr. Romney incorrectly interpreted an administrative regulation as a "law" requiring Catholic charities not to discriminate against same-sex parents in adoption placements. He even added that same-sex couples have a "legitimate interest" in adopting children. So the important principle that a child needs both a mother and a father (not "two daddies" or "two mommies") is out the window?

Lastly (we're only hitting the highlights here), there is the well-publicized allegation that Romneycare was a de facto forerunner of Obamacare.

And to top it off

Comes now a report that a wealthy Wall Street trader who has contributed $2,500 to the Mitt Romney campaign is also a big (reportedly the biggest) moneybags backer of Occupy Wall Street, the America-haters some of whom have threatened to overthrow the U.S. government.

Robert S. Halper (apparently blessed with more money than common sense) is retired in his early fifties. Having acquired his fortune through the capitalist system, he has bestowed a goodly portion of his largesse toward the revolutionaries who seek to destroy it.

According to the New York Times and others, Mr. Halper has donated $75,000 to Adbusters, the Canadian magazine widely credited as being a (if not the) force behind the Occupy movement, which was envisioned by its backers as a U.S. version of the so-called "Arab Spring."

Halper tells the NYT that he's "a little anxious" about it all, that he hopes it will be peaceful and "it could go anywhere." (Comment: Duh!)

Of course, anyone can contribute money to a presidential campaign without the candidate doing a background check. But one need not resort to "guilt by association" to wonder: What is there in the campaign of a Republican presidential front-runner that would attract a donation from someone who also became so inspired by the "U.S. Arab Spring" that he would put money into an outfit that spawned an assemblage now attracting support from the likes of the Communist Party USA and the American Nazi Party? 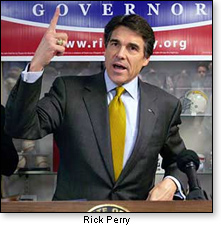 That Mitt Romney has been doing so well in the primary race testifies to the inadequacies of the line-up.

Rick Perry's entry to the fray, for example, prompts memories of the wooden puppet Pinocchio confidently striding out on stage only to fall flat on his face to audience laughter. All the Texas governor accomplished was to detract from Michele Bachmann, a credible candidate who has not yet recovered.

Herman Cain is doing quite well at the moment. He's very likeable. Yet to be determined is how his 9-9-9 tax plan holds up under scrutiny, plus whether he can acquire an organization on the ground and the requisite campaign cash.

Newt Gingrich is probably the smartest one in the room, but he is disadvantaged by a personal life that would be smoothed over by the media if he were a Democrat.

So we're back to Mitt Romney? A nice man with some good qualities, but he's not a conservative. Is this the best we can do with the golden opportunity that supposedly awaits us in 2012?

Really? Let's hope we still have meaningful elections in 2016.