In my last column, "Birth of a conservative intellectual," I presented a personal narrative of how I rejected the zeitgeist of Darwinism, liberalism, socialism and hedonism that permeated most American colleges and are zealously embraced by most of my classmates, to become a Reagan conservative during my senior year at DePauw University, leading to the genesis of my first essays 30 years ago. Below is my second essay I published on this long odyssey of becoming a conservative intellectual in America. 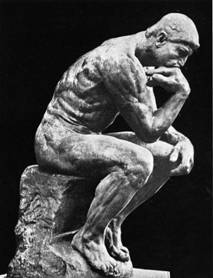 What provoked me to write these essays was my vexation at the low level of intellectual rigor of our school newspaper. I grew weary of knowing what the sororities and fraternities did at their parties, who won the football, basketball and baseball games, or what girl would become homecoming queen. I wanted to read something substantive, something intellectually compelling, something that could improve the character, enlighten the mind, yea ... even help fulfill the destiny of the reader! As I mused on this and the paradigm shift I was compelled to make during Christmas break 1982, I thought: why not write something myself?

Note that this essay on epistemology and political philosophy is demonstrative of the world's collective delusion in embracing several perverse Weltanschauung (worldviews) beginning with the secular humanism of the Enlightenment Age (1600s – 1700s) promoted by philosophers like Voltaire, Kant, D 'Alembert, Diderot, Rousseau, Hume and Berkeley. The result? The grand finale of the atheist-humanist movement led inexorably to the anti-Christian, anti-cleric genocide of the French Revolution (1789-99) quickly followed by the tyranny of Napoleon (1804-1815).

The apotheosis of liberalism and its many permutations over the past three centuries reminds me of the famous historical aphorism: Liberal fascism will always fail because it will always collapse upon the weight of its own immorality.

Our dialectical philosophy abolishes all the notions of absolute and definitive truth.

Since I entered the realm of higher education I have found myself overwhelmingly bombarded by a plethora of historical, educational, philosophical, sociological, psychological, religious, economic and political theories. I am having trouble assimilating these in conjunction with my own personal beliefs that were instilled in me by my parents.

My main concern deals with the origin of these various philosophies and theories and how they have permeated our educational system. Unless rectified, these veritable mind manipulators will obliterate all conceptions of reality, structure, form and morality from education.

Frederick Engels, in his eulogy to Kark Marx, said, "Our dialectical philosophy abolishes all the notions of absolute and definitive truth." This quote is my focus in a nutshell.

It is imperative that we understand the present situation that our own educational system is in and how it got there. The following men were the primary originators and developers of the type of educational dogma expressed today throughout Europe and America: Immanuel Kant (1724-1804) was an 18th century German philosopher. He never traveled more than 69 miles from his native Prussia, yet his philosophies are literally worshiped by our institutions of higher learning today.

Before Kantian philosophy, there was classical philosophy, which thought in terms of cause and effect. This means that if A is true then non-A cannot be true. Values were absolute.

George Hegel (1770-1831), "philosophical dictator of Germany," took the ideas of Kant and expounded upon them in a more intellectually structured manner. Hegel glorified the state. He believed that one fact or idea (thesis) working against another fact (anti-thesis) would produce a new fact (synthesis). This [dialectical] philosophy was the basis of communism, the political and economic ideas of Karl Marx, and the National Socialism of Adolf Hitler.

Søren Kierkegaard (1813-55), the father of contemporary existentialism, believed that a man comes to a point in life where truth and life have no concrete purpose. To find [meaning and] purpose man has to invent some type of religion to govern himself. This philosophical thought was a very detrimental blow to the foundations of our initial American educational system that is based on the Judeo-Christian structure.

Karl Marx, together with Engels, formulated goals through their brainchild of communism to abolish private property; centralize all power in the hands of the state; and control the world.

Cleon Skousen, in his book, "The Naked Communist," stated that, "the communist intellectual believes that everything in existence came about as a result of ceaseless motion among the forces of nature. Everything is a product of an accumulated accident. There is no design. There is no law. There is no God. There is only matter and force in nature." Not only is this Darwinism in its purest form, but it is a typical manifestation of contemporary college intellectualism which is so gloriously prostituted throughout campuses nationwide.

This philosophy of "relative thinking" has found a very congenial home in the higher educational systems of Europe and America. It's really ironic that the more "educated" people become, the more they reject absolutes of God, truth, and morals. Even those who had a true faith in Jesus Christ found their beliefs overtly attacked in college.

It is my expressed intention that the viewpoint exhibited in this article will be of interest to the campus as a whole, but especially to those whose views toward their faith in general is seriously questioned. May you find a more secure foundation in which to meet this opposition effectually.

Since the Enlightenment Age (1600-1800), liberals, atheists, secularists and later Marxists, socialists and progressives on their road to utopia always agitate class warfare, wanton violence and societal chaos as the ubiquitous pretext to achieve their Machiavellian ends. Rapper 50 Cent put it this way: "Different day, same sh – !" These are the consequence of following socialism; Siren cries for government intervention, regulation and control over our freedoms. If the Democratic Socialist Party had any concern for its victims, government would require them to follow conservative principles of personal responsibility and rule of law. Yet history has demonstrated that Marxists and progressives won't be content until every city is Detroit, every state is a bankrupt ward of the federal government and every citizen is a dependent slave to whatever socialist slave master controls power.

Harriet Tubman, champion of the Underground Railroad, could very well be speaking to this generation: "I freed a thousand slaves. I could have freed a thousand more if only they knew they were slaves."