Ellis Washington
Symposium - Which boss would you want?

April 2, 2016
Socrates (470-399 B.C.) was a famous Greek philosopher from Athens, who taught Plato, and Plato taught Aristotle, and Aristotle taught Alexander the Great. Socrates used a simple but cleverly profound method of teaching by asking penetrating, revelatory, and psychologically probing questions. The Greeks called this form Dialectic – starting from a thesis or question, then discussing ideas and moving back and forth between points of view to determine how well ideas stand up to critical review, with the ultimate principle of the dialogue being Veritas – Truth. 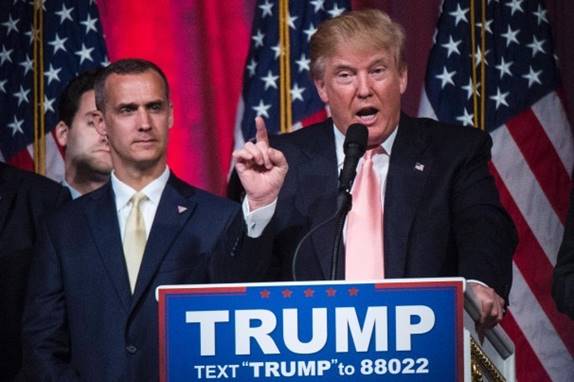 "The greatest way to live with honor in this world is to be what we pretend to be."
~ Socrates

I can't destroy a man's life with somebody that does a story.

You're on the side of the Soviet Union condemning Lewandowski without a trial. Doesn't that tell you more about you than it does about him? ... You're just like the Soviets – J'accuse! – J'accuse! (I accuse!) and simply by accusing, he's guilty? That's how you've become, all of you conservatives?...

Corey Lewandowski (We the People)

Socrates: During this birthday Symposium of Dr. Michael Savage, the quintessential opposite of a Fool, was born one day before April Fool's Day, we come to this singular question of ultimate concern: Should Trump firer his campaign manager, Mr. Corey Lewandowski or should the reporter, Michelle Fields, be arrested? Why do you think the New York Times article about the power of talk radio featuring Michael Savage, which is the leader of talkradio, is not being blogged or discussed on media and television? I think you pretty much know the answer to the second [question], but I don't know if you know the answer to the first question.

The reason why the New York Times chose me (and no one else) to be the leader of conservative talkradio in shaping this election – the reason why you are not hearing about it in any of the other media or blogs is because I [Michael Savage] am not part of the cartel of talkradio. They are stunned that Michael Savage was featured and no one else was featured and as a result the cartel of talkradio is making believe the article didn't occur.

Here's a few more dialectical questions we will discuss in this Symposium – Since Trump doesn't make believe that he is poor, then why is the blue collar worker (and I'll specifically say) the White guy who generally has given up on voting, the union worker whose taken himself out of the system because he is so disgusted with both parties – why does he feel that Trump will represent his interests better than Ted Cruz?

Dr. Michael Savage makes this logical point regarding the Lewandowski affair: If you were accused of a crime based on questionable charges, which boss would you rather work for?

And by the way, did you notice how that charge had changed after she found out that Donald Trump produced the tape? Had I not have produced the tape, it would have been much worse. Because look at the statement she made, I had to write it down, 'forcefully thrown reporters to the ground, campaign managers aren't supposed to forcefully throw campaign managers to the ground'. What ground? I mean, if you look at her face, her expression doesn't even change. 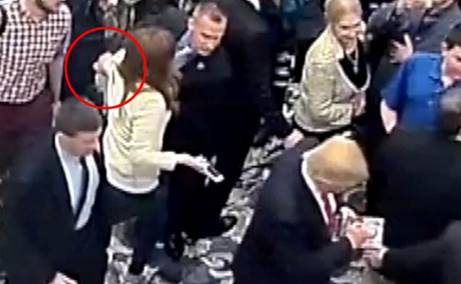 Socrates: We know from the Jupiter, Florida police where the incident occurred and the security of the Trump campaign on that as Trump was leaving the press conference, the interview was officially over, and Breitbart reporter, Michelle Fields had been twice warned to stay away from Trump and stay with her press colleagues. She ignored those warnings and assaulted you, Trump which caused this former New Hampshire police officer, Corey Lewandowski, to rush to your defense and gently restrained Fields from assaulting you?

Trump: That's right; Michelle grabbed me first. I was almost at the entrance, in the lobby, walking out briskly. And she, all of a sudden, jumps in! So, she grabbed me and she had something in her hand. I don't know what it was. It looked like it could have been a pen. But you know, from the standpoint of where we are, who knows what it is. So she grabs me and then he maybe brushed her aside, and we're going to destroy his life for that? I don't think so.

Boss #2 (Cruz): Of course I would have fired him [Lewandowski] if he were on my team. Look it shouldn't be complicated that members of the campaign staff should not be physically assaulting the press. I mean that shouldn't be a complicated decision.

We the People: To his credit CNN reporter Anderson Cooper noted the obvious constitutional question that Cruz ignores – that Lewandowski claims to be innocent of all charges and asked Cruz if he thinks it was assault. "You know he's just been charged. I know that the reporter alleged that she was physically assaulted," Cooper queried. Cruz replied:

Boss #2 (Cruz): That, that, I will say it's consistent with the pattern of the Trump campaign.

We the People: Thus even though Cruz is a graduate of Harvard Law School of whom famed law professor Alan Dershowitz called his former student – "off the charts brilliant... one of the sharpest students I had," yet when asked a constitutional question about the Fifth and Sixth Amendment rights of a defendant charged of a crime to due process (Fifth Amendment) and the presumption of innocence until proven guilty (Sixth Amendment), Cruz, being the political establishment and self-righteous phony he is, ignored that question to make cheap, untrue accusations that Trump's defense of his campaign manager, Corey Lewandowski amounts to Trump assaulting women which "[is] consistent with the pattern of the Trump campaign." 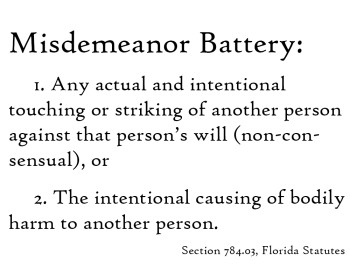 Boss #3 (Kasich): "He would have been fired long ago." (Business Insider and NBCNews.com). "Now I heard there is a video I would have gotten rid of him. Period," Kasich told NBC News' Chuck Todd during a town hall conversation airing Wednesday at 7 p.m. ET on MSNBC. "I have two 16-year-old twin daughters. And if he happened to be the nominee, I would have to tell them why I would endorse him if I did," Kasich said.

Boss #4 (WH Press Secretary Josh Earnest): "I am confident that neither President Obama nor President Bush would tolerate someone on their staff being accused of physically assaulting a reporter, lying about it and then blaming the victim," Earnest told reporters.

We the People (Fred Nuvuk): Obama certainly tolerates Jihadists on his staff. Matter of fact, Obama cherishes terrorists so much that he's invited millions to live on the taxpayer's dime while they carry out their Caliphate. Imagine that, we are actually paying Stone Age savages to run amok in our country. The U.S. taxpayer is funding their own demise, courtesy of Barack Hussein Obama. Obama is a traitor to our nation; absolute worst POTUS in history and defended by the misinformation spewed out daily upon We the People by Obama's Goebbels – his Minister of Propaganda, Press Secretary Josh Earnest.

We the People: Is Obama, Cruz and Kasich courageous Men of Principle, or are they cowardly opportunists shamelessly trying to score political points at Trump's expense? If the latter, how would a President Cruz defend We the People vs. Tyrant X____ or would Cruz sell U.S. out like he wanted Trump to do to Lewandowski, before his constitutional rights were vindicated? – Before Corey had his day in court?!

I prefer Boss #1 (Trump) to have my back, not Boss #2 (Cruz) or Boss #3 (Kasich), or Boss #4 (Obama), who for the Judas price of self-righteous hypocrisy, fleeting fame, petty jealousy and false political advantage, put the knives in the collective back of We the People!

Trump: I'm a loyal person. I'm going to be loyal for the country. I'm going to be loyal for Wisconsin. We have to tell it like it is. It would be so easy for me to terminate this man [Lewandowski], ruin his life, ruin his family. He's got four beautiful children in New Hampshire. Ruin his whole everything and say, "You're Fired!" I've fired many people, especially on The Apprentice. {laughter} I stick up for people and I don't want to ruin somebody's life.

Or would you rather have Ted Cruz as a boss? Listen to what your other boss would do to you if it was Ted Cruz. Is that who you want running America? When CNN host Anderson Cooper asked Cruz, "If he [Lewandowski] was your campaign manager, would you have asked him to resign? Cruz without hesitation answered,

Socrates: Alright, there it is. There is your answer – One man has character, one doesn't. One would throw you overboard, one wouldn't.

{To the mob, the crowd} Let us hear the conclusion of this Symposium: "You're on the side of the Soviet Union condemning Lewandowski without a trial. Doesn't that tell you more about you than it does about him? ... You're just like the Soviets – J'accuse! – J'accuse! (I accuse!) and simply by accusing, he's guilty? That's how you've become, all of you conservatives?" 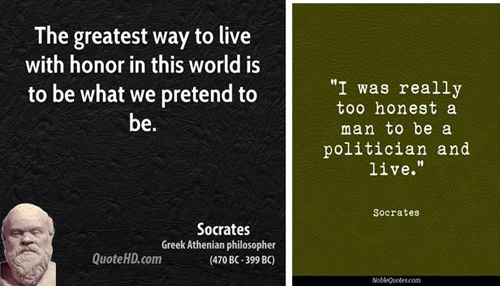