July 21, 2013
"The bride and bridegroom must set their minds to produce for the State children of the greatest possible goodness and beauty." 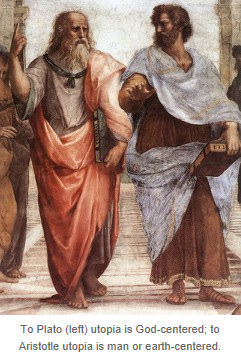 The introduction to "The Faber Book of Utopias," edited by John Carey, chronicles the methods of creating ideal citizens, which historically have been repeatedly promoted by utopian philosophers via the deconstruction or abolition of the family. Originally proposed by Plato in his magnum opus, "The Republic," this simple yet dramatic blueprint has influenced a number of social philosophers as diverse as More, Hobbes, Voltaire, Rousseau, to Darwin, Marx, Nietzsche, Weber, Freud, B.F. Skinner, to socialist, liberal, progressive thinkers and politicians in modern times. Plato promoted the belief that the family should be completely deconstructed and its component parts used as tools of an omnipotent, leviathan state. This means that children will be taken from parents practically from birth, preventing the parent/child bonding. Children will be raised exclusively by state bureaucrats; the unfit, mentally feeble, undesirables like their fellow Greeks (Spartans) and in modern times under Hitler and the Nazis, summarily aborted.

Succeeding utopian writers oftentimes adapted Plato's design in an altered format. For example, in Thomas More's "Utopia" (1516) children reside with their biological parents; however, if the family became too large, they were transferred to live with other, less fertile families. In Plato's "Republic," parent-child bonding is prohibited, and the dangerous effects of parental indulgence prevented. Ironically, feminist utopians have found common ground with Plato's anti-family model in part because to the feminist view it unshackles mothers from their slave-like burdens to home and domestic work. This feminist view is demonstrated in Charlotte Perkins Gilman's all-woman utopia ("Herland," 1915): Private homes and families have been eradicated. Children are brought up by state-appointed child psychologists.

Social historians have theorized that the high rates of infant mortality common in prior cultures may have been contributing factors in weakening family bonds, thus making Plato's radical anti-family philosophy appear less offensive than in modern times. In ancient times, then, up to the advent of modern medicine, parental love more often than not ended in despair; it was therefore discouraged and considered socially undesirable. Consequently, infants were separated from their parents in their early and most susceptible years and sent to live with wet-nurses or carers. In pre-Victorian and post-Victorian eras, the English upper classes maintained comparable social norms. Influenced by a modified Platonic design, children were nurtured by wet-nurses, governesses, servants and shipped off to boarding school at an early age.

These measures amounted to a major paradigm shift in the family dynamic where middle-class and upper-class families in England, throughout Europe and America implicitly accepted the false idea that the parents were incompetent to raise their own children properly. Presently, health and human social service departments in Britain and in some other European countries have the power to remove children from usually poor or violent families and place them in the custody to the state. This practice also follows the Platonic principle that in the last recourse the state, not the mother or father, is qualified to decide what is best for the child. In 1923, the Italian dictator Benito Mussolini adopted Plato's anti-family ideas with this famous fascist slogan: Everything inside the State, nothing outside the State, nothing against the State.

Except in these extreme cases like communist or totalitarian states, Plato's abolition-of-the-family paradigm now seems to be a minority view. In contrast, the Platonic sanction that children considered unfit to live should be exterminated is now commonly accepted in Europe and America, though scientific and political devolution allows for the termination of the child's life before rather than after birth. This paradigm shift over society is indeed a supreme triumph for utopianism; a triumph whereby disparate people and ideals of irreconcilably different camps are brought together under the broad, totalitarian banner of utopianism. It is also a triumph of Hegelian dialectic – thesis (problem), antithesis (reaction) and synthesis (solution) – truth mixed with invidious lies forms a new paradigm based on propaganda, distortion and perversion, or what Joseph Goebbels, Hitler's minister of propaganda called the Big Lie.


How to beget excellent offspring has always been a prime utopian concern, and it offers, supposing it could be made to work, an absolutely fool proof way of replacing real people with utopians. Plato gave his Rulers the duty of pairing off males and females on eugenic lines. Tacitus' admiring account of the Germans added the refinement that intermarriage with foreigners should be avoided, so as to preserve the purity of the race. The eugenics movement, headed by Francis Galton in the late 19th century, aimed to discourage degenerates and other undesirables from breeding, and to promote parenthood among healthy, intelligent people by tax concessions and maternity benefits.


Eugenics, including forced sterilization of the "unfit," was popularized by the progressives including presidents Theodore Roosevelt and Woodrow Wilson, H.G. Wells, George Bernard Shaw, Walter Lippmann, Rexford Tugwell, W.E.B. Dubois and other influential utopians. Eugenics before the Second World War in Nazi Germany and some American states was official public policy. During the Nazis period, eugenics became anathema for a time after the war; however, the idea of biologically modifying and engineering the "perfect" child and race of people is tragically facing a revival. The false promise that genetic engineering portends for improving the human race epitomizes the most important scientific advances since Einstein.

Eugenics brings into the realm of the imaginable the manufacture of real live utopians, disease-free, herculean, hyper-intelligent children of the kind that the original utopian writers have been fantasizing about for centuries. Lee M. Silver's utopian predictions ("Remaking Eden," 1998) says that parents will be able to buy these physical improvements for their pre-born children and that many will do so regardless of morality, legality and economic considerations. Silver theorizes that the human race will of necessity divide into two incompatible species, the Gene-enriched and the underprivileged, sub-standard Naturals. War is inevitable. Thomas Hobbes, in "Leviathan" (1651), predicted this existential state of nature the "war of everyone against everyone" (bellum omnium contra omnes).

Since 1900 the question of eugenics has been inextricably connected with leftists alarm at population explosion. Their solution: global birth control, genocide and democide. It was not just that the wrong people were breeding, eugenicists protested, but that the planet was becoming choked with humanity. Birth control became more or less standard in utopias since 1900. The Supreme Court, in Griswold v. Connecticut (1965), paved the way for the legalization of birth control pill, and 40 years ago, in Roe v. Wade (1973), the Court legalized infanticide, now approaching 60 million casualties.

The Progressive Revolution will continue to mandate universal policies of death for unfit populations through their current champion, President Barack Obama, unless and until conservatives raise up their own champion to defeat him.