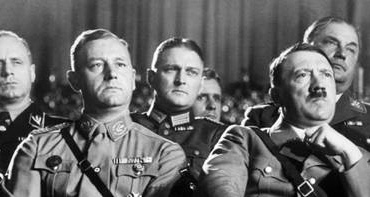 Hitler, a movie fanatic, well understood the infinite propaganda power of the cinema

Is it possible that such an iconic American institution as Hollywood, including all of the biggest studios and studio moguls like Louis B. Mayer (MGM), Carl Laemmle (Universal), Paramount and others, from 1930-42 were willing, treasonous collaborators with Adolf Hitler and the Nazis? Was Hollywood essentially functioning as the de facto American cinematic division of Joseph Goebbels, Hitler's Minister of Propaganda... even to the treacherous extent of Hollywood sending money to Hitler during the war to buy armaments the Nazis used to kill American and Allied soldiers? These and many more blockbuster allegations are chronicled in Ben Urwand's new book, "The Collaboration: Hollywood's Pact with Hitler." Urwand, a Harvard University doctoral student, whose maternal grandparents were Holocaust survivors, has revealed documents that have never before been made public until now.

Hollywood's major studios not only bowed to Nazi censorship demands of American movies, but directly and enthusiastically collaborated with Hitler's propaganda machine under the servile and obsequious pretext of protecting their present and future (should Hitler win the war) business interests in Germany and in German-controlled European cinema markets.

Urwand's essential treatise offers evidence that the heads of large Hollywood studios, some of them Jewish immigrants, edited films, scene by scene, at the behest of senior Nazi officials. The results were certain films doubtlessly used as Nazi propaganda. One document even suggests that Hollywood sent money to Germany to produce munitions, the report said. "Hollywood is not just collaborating with Nazi Germany, it's also collaborating with Adolf Hitler, the person and human being," Urwand, said in an interview with The New York Times.

"Throughout the 1930s, the term 'collaboration' was used repeatedly to describe dealings that took place in Hollywood," writes Urwand, whose book was released this week. "Soon every studio started making deep concessions to the German government, and when Hitler came to power in January 1933, they dealt with his representatives directly."

Hitler was a film fanatic who understood the manipulative control of cinema as a propaganda weapon to control people and demonize your enemies. Urwand uncovered for example a case when the Nazis banned a movie that had a film scored by a Jewish composer. Paramount appeased the Nazi censors by offering to dub "Give Us This Night" with music by a German composer. Further bowing to Nazi censors in 1937, Paul Thiefes, a member of the Nazi Party, was selected by Paramount as the new manager for its German division.

So deep was Hollywood's collaboration with Nazism that at rival studios MGM, Frits Strengholt, the head of the German office, even divorced his Jewish wife at the demand of the Propaganda Ministry – she ended up in a concentration camp.

The genesis of Hollywood's servile appeasement to Nazi fascism and anti-Semitism originated from the December 1930 German screening of the Oscar-winning film "All Quiet on the Western Front" – based on Erich Maria Remarque's novel about German soldiers' anguish during World War I. The Nazis bought 300 tickets to the screening, but began to heckle and shout at the screen in the scenes depicting the French defeat of the German troops. "German soldiers had courage. It's a disgrace that such an insulting film was made in America!" yelled a Nazi from the crowd, forcing the projectionist to stop the film. Joseph Goebbels, the Nazi Minister of Propaganda, then arose and launched a demagogue rant against the film and against the American film industry as an assault on Germany.

At subsequent screenings of this movie, the Nazis hurled stink bombs inside the auditorium and scattered cages of mice, precipitating the evacuation of the movie.

Following a public outcry against the "unpatriotic" film six days later, it was removed from German screens, with Goebbels triumphing: "We have forced them [Hollywood] to their knees!" The experience caused self-loathing panic in Hollywood. According to one spokesman, Universal films had "lost a fine potential business, for the film would have been a tremendous financial success in Germany if it could have run undisturbed."

Carl Laemmle, president of Universal films, in a duplicitous and extreme effort to appease Hitler and the Nazis, ordered that the film be re-edited, and by the summer of 1931 the German Foreign Office had screened and approved it. It was then sent across Europe – replacing the original. "Naturally," the German Foreign Office gloated, "Universal's interest in collaboration is not platonic but is motivated by the company's concern for the well-being of its Berlin branch and for the German market."

Victorious, the Nazis ratcheted up their demands on Hollywood which now came from Georg Gyssling, the German consul in Los Angeles. Urwand writes, in extracts of his book reproduced in The Hollywood Reporter: "His main strategy was to threaten the American studios with a section of the German film regulations known as "Article 15." According to this law, if a company distributed an anti-German picture anywhere in the world, then all its movies could be banned in Germany."

Nazi censorship of Hollywood movies extended to the adaptations of the other two novels in the "All Quiet on the Western Front" trilogy which were equally controversial.

In April 1937 Gyssling sent letters to about 60 people involved in the second book, "The Road Back." The director, James Whale, was removed from the film and Universal made 21 cuts to the film. Outraged at Universal's cowardice to Nazi censors, Whale resigned from the studio and never made a picture with Universal Studios again.

The third of the movie trilogy, "Three Comrades," was scripted by "The Great Gatsby" author F. Scott Fitzgerald. Gyssling's censorship office editing was so extensive that it rendered the movie almost unrecognizable. "After all the changes had been made, Three Comrades neither attacked the Nazis nor mentioned the Jews," wrote Urwand. "The picture had been completely sanitized." Other films were blocked entirely, before they could be made.

While the treachery of Hollywood's collaboration with Hitler and the Nazis should not surprise those of us who know American cinema history, we are nevertheless indebted to Urwand's historical scholarship on this neglected part of history. On this point, did you know that Hollywood's first movie was the exceedingly racist, pro-KKK propaganda movie, "Birth of a Nation" (1915) directed by D.W. Griffith? – a movie which caused race riots, beatings, extensive property damage and even deaths inflicted against blacks in many cities across America. Nevertheless Democrat President Woodrow Wilson (1913-21) loved this movie so much that he had it personally screened inside the White House, giving it one of the most famous reviews by any movie critic – "It was like writing history with lighting."

If these Hollywood moguls, driven by Neville Chamberlain's servile appeasement, could sellout their own country before the rise of Hitler and the Nazis and during World War II and Hitler's Holocaust against the Jews, without being blacklisted, tried for treason and imprisoned, then what makes anyone think that today's liberal fascists in Hollywood (e.g., Sean Penn, Michael Moore, Whoopi Goldberg, Danny Glover, Barbara Streisand, Alec Baldwin, Jane Fonda, Susan Sarandon, Janeane Garofolo, Joy Behar, Oliver Stone, Matt Damon, Angelina Jolie, Brad Pitt, Samuel Jackson, Morgan Freeman, Steven Spielberg and many, many others) will pay any price for their treachery in the twenty-first century?

Democrat Socialists never pay any price for treason because the Judas precedent had already been set 80 years ago between Hollywood and Hitler.