November 23, 2013
"After tomorrow those godd-n Kennedys will never embarrass me again. That's not a threat. That's a promise." – LBJ to his mistress Madeleine Brown on the eve of JFK assassination

Did LBJ have JFK killed? 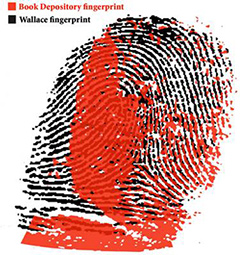 This question has endured ever since that fateful day of 50 years ago – Nov. 22, 1963. Former Nixon White House adviser and self-proclaimed "GOP hit man" Roger Stone makes this central argument in his new book, "The Man Who Killed Kennedy: The Case Against LBJ." Stone's very interesting narrative isn't another "conspiracy theory" book to add to the already voluminous number of fantastical JFK assassination claims. Roger tells Reason Magazine Editor, Nick Gillespie, "The whole term 'conspiracy theorists' is a pejorative that the mainstream media uses to denigrate anyone who questions the government's version on virtually anything. ... I'm not talking conspiracy, I'm talking facts."

In an interview with Abby Martin, who asks Stone, "What's the strongest piece of evidence that implicates LBJ in Kennedy's murder?", Stone replies, "Probably the fingerprint of LBJ's personal hit man named Malcom 'Mac' Wallace that is found on a cardboard box on the sixth floor of the Texas School Book Depository. It's the only print other than the prints of Lee Harvey Oswald that I believe were planted there, so that is probably your strongest piece of evidence."

Secondarily, Johnson's mistress of 21 years, Madeleine Duncan Brown, who bore him an illegitimate child, said Lyndon Johnson told her on the eve of the assassination, "After tomorrow those godd-mn Kennedys will never embarrass me again. That's not a threat. That's a promise."

"And then lastly I think when the presidential motorcade pulled into Dealey Plaza in Dallas when Vice President Johnson's car made the 120 degree turn on Elm St. into Dealey Plaza, Lyndon Johnson, before the first shot was fired was on the floor of his car; he hits the deck. There's photographic evidence that proves this. So I would say that before, during and after the assassination Lyndon Johnson's actions betray the fact that he is in fact the man yoking the conspiracy, or in this case the plot that includes the CIA, organized crime and Big Texas Oil," Stone contends.

When asked about how his book is different from all of the other books claiming various JFK assassination conspiracy theories? Stone's answer recounted his professional relationship over many years as a trusted adviser to President Richard Nixon, who confessed to Stone "that the Warren Commission was the greatest hoax ever perpetrated." Stone again: "Nixon never flatly said who was responsible for Kennedy's death, but he would say both he and Johnson wanted to be president; the only difference, Nixon said was he refused to kill for the job."

Stone admits to additional firsthand confirmations that indeed LBJ killed JFK from such colorful characters as Ambassador John Davis Lodge, who was the brother of Henry Cabot Lodge, JFK's ambassador to Vietnam; Attorney General John Mitchell; Tony Salerno, head of the Genovese crime family in New York; and New Orleans mob boss Carlos Marcello, who all plotted together with the CIA and LBJ to assassinate JFK.

Stone, in his book on LBJ, chronicles voluminous amounts of damning evidence that points to LBJ as behind the JFK assassination, including Dallas being LBJ's territory, the Dallas Police Department and the Dallas media were under his control, LBJ's close friend (D.H. Byrd) owned the book Texas book depository building, LBJ's personal assassin on many other hits (Malcolm Wallace) was seen on the sixth floor of the book depository building that day while 75-90 seconds after the assassination, Oswald was seen by several eyewitnesses including the building superintendent and a Dallas police officer not on the sixth floor, but sitting alone in the second-floor cafeteria drinking a Coke and apparently oblivious to the fact that JFK's assassination had just occurred less than two minutes earlier.

Stone further argues that Texas Gov. John Connally insisted that LBJ's cronies dictated the route of the presidential motorcade instead of JFK's advance team. This conflict caused a huge argument between JFK and LBJ, as witnessed by Jackie Kennedy, because JFK insisted on having Gov. John Connally, a loyal LBJ crony, ride in his limousine – while LBJ wanted his political foe, Sen. Ralph Yarborough, to ride with JFK (thereby killing two birds with one stone).

The trap was completely set when the presidential motorcade route was published in all the Dallas newspapers. As history dictated, JFK convinced LBJ to allow John Connally to ride in his limo, and Connally was shot along with JFK, although he survived. Yarborough, riding with a frustrated LBJ, was never harmed.

There is no physical evidence of Oswald being on the sixth floor of the Texas book depository building that day. The palm print the FBI found on the murder weapon was taken from Oswald and planted on the rifle while Oswald's body lay in the morgue after he was killed by Jack Ruby. The Dallas coroner recalled, after the FBI left, finding black fingerprint ink on the hands Oswald's corpse, which obviously wasn't there before the FBI arrived.

"Immediately after the assassination of JFK," according to Stone, "LBJ spread the knowingly false story that the Russian government had killed Kennedy. He told Earl Warren, the chief justice of the U.S. Supreme Court, who was reluctant to chair the Warren Commission. He was only persuaded because Johnson convinced him that the Russians had killed Kennedy and, if the truth got out, then it would precipitate World War III. This was a lie that Johnson told over and over. There's no truth to it. We now know that when Kennedy was killed, Soviet Premiere Nikita Khrushchev wept. Also, Fidel Castro who was with an American when he got the news, kept repeating "Oh no!" and "This is very bad news." "I do not think that the Russian state was in any way involved in the assassination," says Stone. "I think Johnson lied about this."

Finally, Stone mentions "Landslide Lyndon's" ascension in politics where his infamous 1948 election launching his career as a senator was obviously a stolen election in which LBJ won by only 87 votes, all in alphabetical order, in the same handwriting and they all signed in the same ink ("Box 13"). Through a magnificent presentation of original sources, Stone ties LBJ to eight murders prior to the JFK assassination, including his own sister, whom Stone's contends "he may have killed" and "is buried without an autopsy." LBJ's sister, Josefa Johnson, was murdered Christmas Day 1961 after leaving a party hosted by LBJ. "I think he's an amoral psychopath," says Roger Stone of LBJ. "I think he's crude, evil, vicious, vindictive, [a] drunk. I think that Lyndon Johnson had unique motive, means, and opportunity to kill John Kennedy and I think that he participated in a plot to do so."

"How did this happen?" "Who is responsible?" and the most important question: "Who had the most to gain?" Doubtlessly, the answer to all three questions points directly to Vice President Lyndon Johnson, who had motive, means, and opportunity to kill JFK:
With JFK out of the way, LBJ would become president of the United States – a coveted position that those who knew LBJ realized he would kill to obtain by any means necessary.

Was LBJ thinking of the JFK assassination when he made this cryptic admission: "It is the melancholy law of human societies to be compelled sometimes to choose a great evil in order to ward off a greater evil." Or how about during his interview with Walter Cronkite when LBJ says, "Oswald," and he pauses, realizing that he did not want to speak that name publicly to Cronkite and closes his eyes in despair, before continuing to the ultimate incriminating statement, "others that could have been involved."

Apparently, not even LBJ believes the findings of his phony, handpicked Warren Commission that Oswald "acted alone." Again, it was impossible for Oswald to kill the president when at the time of the shots were fired (12:30 pm), Oswald was seen by eyewitnesses on the second floor cafeteria of the Texas book depository (not the sixth floor where the FBI "discovered" the so-called sniper's nest). What was Oswald doing? He was found drinking a coke alone in the cafeteria and totally oblivious to the fact JFK had just be assassinated two minutes before. LBJ, the FBI, the CIA, and the Warren Commission knew this, which is why they all had to lie and claim that Oswald was the lone assassin at all costs, and immediately have their dupe Jack Ruby kill the patsy Oswald to silence him, lest 50 years later on this day the light of truth should be shone on the real murderer... Lyndon Baines Johnson!