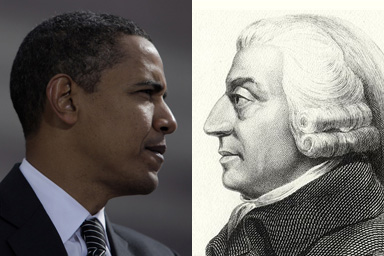 "Statistics show not only that our levels of income inequality rank near countries like Jamaica and Argentina, but that it is harder today for a child born here in America to improve her station in life than it is for children in most of our wealthy allies, countries like Canada or Germany or France. They have greater mobility than we do, not less."

To the 65,910,437 people who voted for Obama in Nov. 2012 I ask: Based on the above statement where Obama gleefully cites "statistics" showing America's level of "income inequality" to socialist hellholes like Jamaica and Argentina, I ask: Who has been president of the United States over the past 6 years?! And who was elected to correct the "worst economy since the Great Depression" which is how Obama repeatedly mischaracterized the recession of 2007 when George W. Bush was in office?

Speaking at a forum earlier this week sponsored by the leftist think tank Center for American Progress, Obama promised to dedicate the remainder of his presidency on shrinking the income and opportunity gap between rich and poor, increasing the minimum wage, increasing the funding for education from pre-school through college, and a defense of welfare and entitlement programs such as food stamps and unemployment insurance, while standing strong with Marxist labor unions and conflating economics to promote the radical LGBT agenda in every part of society.

"It's well past the time to raise a minimum wage that in real terms right now is below where it was when Harry Truman was in office," Obama said to loud applause.

Don't be fooled: Democrat socialists love socialism. A major argument from Karl Marx's 1848 "Communist Manifesto" is this famous statement: "From each according to his ability, to each according to his need," which actually came from his 1875 essay, "Critique of the Gotha Program." Every economic policy of Obama during his almost 6 years is based on this aphorism and another radical socialist statement which last year he said off prompter, "If you've got a business, you didn't build that. Somebody else made that happen."

Every statement Obama says on economics is taken chapter and verse from his intellectual mentor Saul Alinsky, the father of Marxist community organizing and his vile 1971 biopic he personally dedicated to Satan titled, "Rules for Radicals." Rule 13 says: Pick the target, freeze it, personalize it, and polarize it. The target for Obama and the Democrat Socialist Party attacks has always been capitalism and Christianity and the Progressive Revolution is their existential means "to fundamentally transform [i.e., deconstruct] America."

Obama is back on his Marxist Propaganda Tour 2013 to make you think that Obamacare will still allow you to keep your own doctor and keep your own healthcare plan despite the fact that the Obama administration has caused already tens of millions of Americans to lose their healthcare insurance on purpose to force them into a one-size-fits-all Marxist healthcare system where rationing and mass deaths are inevitable.

Yet Obama's arrogance and narcissism always pushes him further into the abyss.

In that speech he spit in the face of history to imply that Scottish philosopher Adam Smith (1723-90) the father of economics and free market capitalism as a supporter of his socialist healthcare plan. He gets away with this insanity because truth doesn't matter to his political base. To Obama's LIVs (low information voters) they are true Kool-Aid drinkers who will believe all the lies and disinformation that comes out of his mouth no matter what because the end result is power and control over the masses.

Regarding Adam Smith, Obama had the temerity to state: "This shouldn't be an ideological question. You know, it was Adam Smith, the father of free-market economics, who once said, 'they who feed, clothe and lodge the whole body of the people should have such a share of the produce of their own labor as to be themselves, to be well-fed, clothed and lodged,'" he continued. "For those of you who don't speak old English, let me translate: It means if you work hard, you should make a decent living."

I'm certain that 95-99% of Obama's audience are clueless to who Adam Smith was and just as Marx, Charles Darwin and Nietzsche is to the Left – to dethrone God, deconstruct Christianity and to destroy capitalism, Adam Smith, the father of economics and free-market capitalism is to conservatives on the Right – he is our philosophical progenitor. Smith's famous treatise, "Wealth of Nations" was even published in that critical year of 1776 where Smith liberated economics from monarchical cronyism and slavish mercantilism while America concurrently declared our liberty from the tyranny of King George III and British colonial rule.

"It means coming together around a responsible budget one that grows our economy faster right now and shrinks our long-term deficits, one that unwinds the harmful sequester cuts that haven't made a lot of sense and then frees up resources to invest in things like the scientific research that's always unleashed new innovation and new industries," Obama said. "When it comes to our budget, we should not be stuck in a stale debate from two years ago or three years ago. A relentlessly growing deficit of opportunity is a bigger threat to our future than our rapidly shrinking fiscal deficit."

Republicans contend that Obama shouldn't shirk responsibility for the difficult economic conditions, the majority of which worsened during his watch.

Citing U.S. Census Bureau data, the Republican National Committee pointed out that since Obama took office, poverty has increased from 13.2 percent to 15 percent, with 6.7 million Americans having fallen into poverty under a week job market during the Obama administration. As of 2012, there was a total of 46.5 million Americans living in poverty, according to the Census Bureau information.

Lincoln said that, "You can't fool all of the people all of the time." Yes We Can! Because the 65,910,437 people who voted for Obama in 2012 willingly did so after they witnessed the cataclysmic deconstruction of America and all of her sacred institutions, policies and economy during his first term (2009-12). I believe the collective dementia and miseducation of America is so comprehensive that they would vote Obama into office for a third term in 2016 if they could.

Adam Smith was a capitalist who famously said, "It is not from the benevolence of the butcher, the brewer, or the baker that we expect our dinner, but from their regard to their own interest." In other words businesses don't exist to give you a job or pay your healthcare insurance. That's your business. The free market and businesses exist to promote the moral self-interest of the creative, innovative, the smart and hardworking who made America the greatest country in the history of the world, not to subsidize blood sucking leeches draining the resources from the diligent citizens brokered by Leviathan government and their overseers we call "politicians" and "activist judges" who hate the U.S. Constitution.

In fact in an article written in the Blaze, Pastor Chad Hovind traced modern economics and capitalism beyond Adam Smith back to God and the 10 Commandments:


Capitalism is not just a good idea, its God's idea built on timeless biblical principles including property rights, freedom, incentive, and the rule of law. These Godonomic [sic] principles saved the pilgrims from the spiral of starvation caused by practicing socialism.

When Gov. William Bradford, of the Plymouth Colony, switched to a free enterprise system that he extracted from the Scriptures, productivity and generosity were released. Free enterprise resulted in the bounty of our first Thanksgiving. (If a group of zealot Puritans can't make socialism work, why would we think that Washington D.C. could make it work?)

To Obama: President Obama, I knew Adam Smith. Adam Smith was a friend of all my intellectual mentors and sir, you are no Adam Smith!