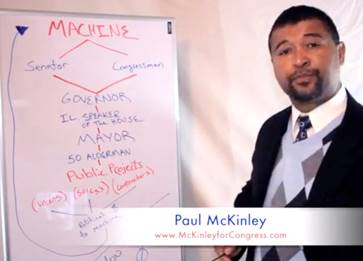 The only thing they're offering the Black community is abortion on demand. This is what president [Obama] is asking us to vote for?


Watkins admits that the narrative has always been anti-Republican yet he has not seen any benefits or prosperity from the Democrats. "We're always talking about what the Republicans ain't done for us, but what they will do to hurt us. My life has been hurt by Democrats," Watkins stated. "This lot where I stand at right now, Ida B. Wells, public housing where they used to live at – most of the people are homeless, living in the street, and it's because of you Mr. President," the camera panning to show the utter destitution of the housing project good-hearted Democrats built to wearhouse Black people with no hope... no future.

Black America, this "Project" (and tens of thousands of others across America) was built for you in 1939 by White people like President Franklin Delano Roosevelt and your Democrat Socialist Party. It was built not to give Black people a home in America, but part of FDR's welfare slavery agenda built as a prison plantation as part of a massive federal mandate to house and enslave Black families to the Democrat Socialist Party; to perpetually keep them inside the voluntary prison called the ghetto. (*N.B.: President Obama is trying FDR's tactics today with so-called "immigration reform" whereby executive decree Obama will unconstitutionally give green cards to 34 million illiterate, illegal aliens (mostly from Mexico, Guatemala and Honduras); not out of love, benevolence, or a legitimate constitutional mandate, but to kill the Republican Party once and for all while creating a new poverty class of Hispanics [like FDR and LBJ did for Blacks in the 1930s and 60s ]who will vote Democrat perpetually).

Carter accuses the Black leaders of keeping the Black community beholden to the government through welfare programs rather than job opportunities. "They [Black leaders] force us into a life of welfare. We don't want no welfare. We want opportunities to go to work. We want opportunities to own business," says Ward who makes a compelling argument against poverty claiming it always seems to exist inside Black neighborhoods. Mr. Carter is very correct on these points yet these devastating policies are by design of the Democrat Socialist Party to create perpetual class warfare and a perpetually angry Black voting base to always vote for the Democrats every two or four years. It's called the "New Slavery" where slave chains are invisible, but the iron bars on the doors and windows of the ghettos where millions of Black people are forced to live behind are not invisible; they are real. Under the New Slavery the slave chains are invisible chains on the ankles, writs and most importantly, slave chains on the mind that compels Black people by the millions every two and four years to vote against their God, against their Christian faith, against the Black abolitionists and civil rights heroes of the past who gave their lives to secure your freedom, to betray them by pulling the lever in the voting booth for the Democrat Socialist Party while concurrently putting another nail in the coffin of Black America to remain prisoners in their voluntary ghetto.

"How can the same process happen over and over again and nobody can't do nothing about it? It's the same way in every black community across the country," stated one of the Chicago activists in exasperation, "And we got the most important thing that we got that we can stop all this. Everybody gotta vote. And if you use your vote wisely, you can stop a lot of this stuff." My only complaint against this outstanding and powerful video is that while one of the Chicago Activists urges everyone to vote, nevertheless he didn't clearly demand the Black people who to vote for? Answer: The Party who freed the slaves via the Civil War (1861-65), gave us Abraham Lincoln, Frederick Douglass, gave us the Thirteen, Fourteenth and Fifteenth Amendments (ending slavery, giving Blacks constitutional rights including voting rights), gave us Booker T. Washington and Martin Luther King... Vote for the R-E-P-U-B-L-I-C-A-N Party!

The attached video was posted at RealPundit.com was of the four Chicago activists Paul McKinley, a Black Republican running for Congress, was posted on Oct. 28th as the banner headline on Drudge Report, and titled, Chicago Activist Unchained, Destroy Black Leadership. Perhaps Black people like the children's story figure, Rip Van Winkle are slowly coming out of their 100 years of slumber since the Marxist (and later pro-Nazi) Black intellectual W.E.B. Du Bois first duped a small percentage of the Black voters to vote for the Democrat Socialist Woodrow Wilson (1913-21) after 50 years of loyalty to the Republican Party, while secretly conniving to get a federal job which although Dubois delivered Wilson a small percentage of the Black vote and sent him "An Open Letter to Woodrow Wilson" dated March 1913. The results? The uber-racist Woodrow Wilson returned the favor by not only NOT giving him a federal job. Wilson was just getting started: President Woodrow Wilson's animus against Black America went to deeper levels of hatred and infamy whereby Wilson promptly fired EVERY Black person who worked for the federal government. (*N.B.: He was a noted academic, scholar, and President of the prestigious Ivy-League Princeton University).

Has anything changed in 100 years of Black devotion to the Democrat Socialist Party? Their collective reward = Slavery, Socialism, Segregation, Mis-education, Ghetto life, and Abortion... while a token number of so-called "Black intellectuals" (like W.E.B. Du Bois 100 years before) have pimped their own race while heaping wealth and notoriety upon themselves being 'Good Negroes' and keeping Black people on the Democrat Socialist Party Plantation – like Paul Robeson, the writers of the so-called Marxist-backed "Harlem Renaissance," Al Sharpton, Jesse Jackson, Oprah, Dr. Cornel West, Dr. Michael Eric Dyson, Dr. Melissa Perry (host-MSNBC), Tavis Smiley, the Congressional Caucasian Caucus, every Black Democrat politician of the 20th and 21st century, the NAACP ('National Association for the Abortion of Colored People'), the millions of Margaret Sanger Preachers who slavishly preach the false gospel of the Golden Donkey every Sunday morning, etc. etc. etc...

To illustrate the utter hatred Democrats have always maintained against Black Americans, Corey Brooks, a popular Black pastor with a large church on the South side of Chicago, has received hundreds of death threats and has been forced to put his family into hiding. Why? For daring to support Bruce Rauner, a White Republican, for governor over the current Democrat Party machine criminal, Pat Quinn. This is Pastor Brooks' reward for years of faithful service to the Chicago Black community and his years as a civic leader. America, there is no choice in the Black community to vote against the dumb donkey of the Democrat Socialist Party and Pastor Brooks learned this lesson the hard way when no doubt Black vandals robbed his church of over $8,000 he was saving in a large plexiglas box in the church entrance to build a new community center in this Chicago neighborhood. 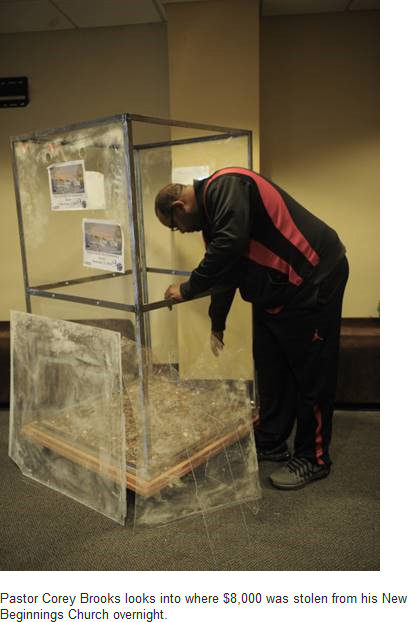 If Pastor Corey Brooks, candidate Paul McKinley and the other three brave Chicago activists aren't silenced (or worse), I hope that their message will be multiplied in every city and town in America as we approach Election Day on Nov. 4th. It's time for REAL Change. It's time for Black America who voted for President Obama in 2008 at 96% and in 2012 at 93% to get off the Damn Plantation!