Ellis Washington
On Pascal's God of Abraham, Isaac and Jacob 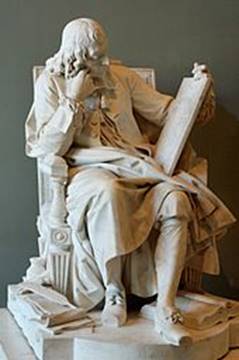 All human evil comes from a single cause, man's inability to sit still in a room.

Blaise Pascal (1623–1662) was a French writer, inventor, physicist, mathematician, and Christian philosopher. Identified as a child prodigy, he was educated by his father, Étienne, a lawyer and a tax collector in Rouen who later in 1631 moved his family to Paris so he could personally attend to his son's education whose method which according to Gilberte, "was to keep the child always in advance of his work." Pascal's initial success came in the field of natural and applied sciences where he made many significant offerings to the study of fluids, and advanced the theories of pressure and vacuum by simplifying the work of Evangelista Torricelli. Like Francis Bacon before him, Pascal also wrote eloquently and passionately in favor of the scientific method.

In 1642, while still a teenager, he did some innovative work to improve calculating machines, and by 1645 after fifty prototypes he was the co-inventor of the mechanical calculator, and over the next 10 years he constructed 20 of these machines (e.g., 'Pascal's calculators'). Pascal was a major mathematician whose pioneering work opened two major new areas of research: at the age of 16 he wrote an important dissertation on the theme of projective geometry, and later through his dialogues with Pierre de Fermat on probability theory, contributed greatly to advancing the academic disciplines of modern economics and social science. Influenced by Galileo and Torricelli, in 1646, he disproved Aristotle's factions which contended that nature abhors a vacuum. Pascal's theories caused tremendous upheaval in the scientific community before the consensus shifted which subsequent generations would come to vindicate his singular genius.

After the death of his beloved father in 1651, Pascal would have a profound religious experience in late 1654, after which he produced important writings on philosophy and theology. His two most celebrated works from this period include the Lettres provinciales and the Pensées, the former set in the conflict between Jansenists (a religious movement of which both Pascal and his sister belonged) and the Jesuits. In 1654 he also wrote an essential treatise on the arithmetical triangle. Between 1658 and 1659 he wrote on the cycloid (a curved traced by a point generated on a circle) and its use in calculating the volume of solids (see picture above of Pascal statute at the Louvre).

Plagued with poor health, particularly after his 18th year, Pascal died just after his 39th birthday.

In literature, Pascal is considered one of the major writers of the French Classical Period and is studied today as one of the supreme littérateurs of French prose. A master of satire and humor he had a great impact on polemicists after him. This literary work is most remembered for its zealous antagonism to the rationalism of René Descartes and parallel arguments that the major opposition philosophy, empiricism, was also deficient in ascertaining philosophical truths.

Pascal's most prominent theological opus was ironically first cobbled together from scraps of paper located after the master died, yet would later become a classic. Mentioned to posthumously as the Pensées ("Thoughts"), this work was not made public until after his death where it appeared in print as a book in 1669 titled Pensées de M. Pascal sur la religion, et sur quelques autres sujets ("Thoughts of M. Pascal on religion, and on some other subjects"). This epic work originally titled Apologie de la religion Chrétienne ("Defense of the Christian Religion") was a comprehensive, systematic analysis and defense of the Christian faith. One of the Apologie's central tactics was to use the opposing ideas of skepticism and stoicism – Montaigne representing skepticism, and Epictetus representing stoicism, in a brilliant strategy to cause the unbeliever to undergo such desolation and mental chaos as to drive him into the arms of God. Pascal's dualism highlights his worldview that he does not serve the God of the philosophers, but the God of Abraham, Isaac and Jacob. Pascal further writes:


Let them at least be honest men, if they cannot be Christians. ... Let them recognize that there are two kinds of people one can call reasonable: those who serve God with all their heart because they know Him, and those who seek Him with all their heart because they do not know Him. But as for those who live without knowing Him and without seeking Him, they judge themselves so little worth of their own care, that they are not worthy of the care of others; and it needs all the charity of the religion which they despise, not to despise them even to the point of leaving them to their folly.


In Pensées, Pascal's literary genius is demonstrative as he examines several philosophical contradictions: infinity and nothing, faith and reason, soul and matter, death and life, meaning and vanity – outwardly reaching no decisive conclusions except for modesty, abstractness, and beauty. Combining these struggles into a singular whole formed the basis of Pascal's Wager.

Pascal is celebrated for his religious writings and philosophy, which he started after his nuit de feu ("night of fire") on November 23, 1654, when he had a life-changing conversion experience. Pascal disliked conformist philosophical "proofs" of God's existence, believing that the nature and existence of God were beyond the power of human reason to comprehend; as a substitute, Pascal's God was the "God of Abraham, Isaac and Jacob, not the God of the philosophers," and could only be engaged through a living tradition of faith.

Pascal's theory for a rational belief in God presupposes that no acceptable evidence is presented or obtainable. Pascal contends that the probable value of theistic belief is much greater than our unbelief, because if one believes, and obligates oneself to a life of faith in God, etc., and it turns out to be true, then one gains a tremendous value (true happiness, morality, Heaven, etc.). However, if one believes in God which does not exist, then living a life of virtue and morality one has lost nothing whatsoever. Consequently (unless the probability of God's existence is small), it is rational to embrace a theistic worldview and the resulting values of life therein.

Pascal believed the "logic of chance" ought to have its foundation in the domain of practical problems. Pascal's famous correspondences with Fermat demonstrates the early mathematical speculations regarding methods for calculating the consequence in games of pure chance. For Pascal the rationality of chance also contains ethical effects. The question of ultimate concern is CHOICE: The cost of being prepared to risk money at the gambling table on the basis of calculated probabilities, versus the benefit or willing choice to act decisively in the face of life's risks, even to endanger life itself on the probability of eternal salvation with God in heaven. In economics this idea is called a cost-benefit analysis.

When we act "on uncertainty, we act reasonably," Pascal writes, "for we ought to work for an uncertainty according to the doctrine of chance." If the probability that God is real and the existence of an after-life is equal to the probability of existence after death being nothing but eternal oblivion – if the equal ignorance of either choice – then, Pascal argues, we must wager or choose immortality and thus establish our theistic worldview for that reason. "There is here the infinity of an infinitely happy life to gain," writes Pascal "a chance to gain against a finite number of chances of loss, and what you stake is finite."

Pascal famous "wager" argument is not meant to be an irrefutable proof of God's existence, but a "pragmatic argument" – a challenge to demonstrate it is rational and logical to be a Christian – that theism and rationalism are not mutually exclusive (as viewed in modern times especially since Darwin's atheist evolution revolution of the 1860s-1900s). Pascal's wager account for the fact that if there may be a God, the believer can anticipate an "infinity of happy life," whereas if God doesn't exist, the unbeliever has essentially lost nothing, yet lived a meaningful and fulfilling life. Pascal's recommendations to a theistic worldview is to disciplines one's life in regular moral pursuits like frequently attending church, following the Golden Rule of loving God with all your heart and loving your neighbor as yourself, which Pascal believes that following such a theistic worldview "in the natural course of events will make you believe."

Can happiness in this life be found where there is no real choice? Ask the 11 million citizens living under the communist dictatorship of Cuba President Obama is hellbent on propping up. If Pascal lived in these times I'm certain he would ask: Where can happiness be found in a philosophical, political, economic and legal system like progressivism, evolution atheism, communism and socialism established on the cynical lie by Karl Marx? – "The meaning of peace is the absence of opposition to socialism." Pascal offers another choice, a real choice writing, "Happiness is neither without us nor within us. It is in God, both without us and within us." However, the road to truth and thus to happiness is paved with many obstacles that the wise person skillfully avoids. "Truth is so obscure in these times, and falsehoods so established," Pascal writes [in the 1600s!], "that, unless we love the truth, we cannot know it."