Ellis Washington
On Edward Gibbon: History of the decline and fall of the Roman Empire, Part II 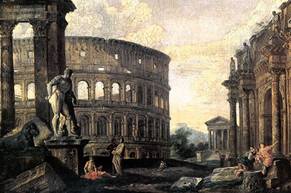 History...is, indeed, little more than the register of the crimes, follies, and misfortune of mankind.

Collapse has happened to every empire in human history. That seems to be, if you will, a natural law – that empires can grow to a certain place and then they implode.

Edward Gibbon's The History of The Decline and Fall of the Roman Empire (1776-89), is the singular literary triumph of the 18th century. Published in six volumes, the books chronicle all of the historic epochs of the Roman Empire after death of the Philosopher-Emperor Marcus Aurelius, from just before 180 A.D. to 1453 ending in 1590. Gibbon employs historical determinism where he narrates the decline of Rome from a moral perspective where Rome's failure to follow natural law and natural rights was the antecedent conditions leading to the moral degeneration, economic collapse and ultimate fall of the Roman Empire in the West (Rome fell in 476 A.D.) and Eastern Empire (Constantinople fell in 1453). Gibbon is celebrated as the first "modern historian of ancient Rome" because of the dispassionate techniques, scientific methodology and very precise use of original sources he scrupulously followed, therefore Gibbon's historicism was accepted as a model for the techniques of most historians in modern times.

As the Roman Empire grew by conquest and the sword, it became increasingly difficult to protect her borders, thus invasions by Barbarian hordes who lived on the fringes of Roman territory became an increasing problem. For example, in 410 King Alaric leader of the Visigoths was able to conquer Rome. The Empire suffered succeeding invasions by the Vandals in 455 and finally in 476 the Emperor Romulus Augustulus was deposed by the Germanic leader Odoacer. Historians generally call the year 476 the fall of the Western Empire because from that point forward no Roman emperor would rule from Rome ever again. Other reasons Gibbon cites was economic depression and abuse of slave labor why Rome fell. With its economy failing and its commercial and agricultural production in deterioration, the Roman Empire started to lose its territories throughout Europe and North Africa as Rome was under perpetual war from the Barbarian tribes. These external threats led to internal calamities including internal corruption, wasteful spending, over taxation and hyper-inflation which further widened the breach between the wealthy and poor. The rich fled Rome and set up numerous fiefdoms or independent power centers throughout the countryside operated by slaves who worked as farmers, craftsmen and even auxiliary soldiers.

Gibbon cited the rise of the Eastern Empire which occurred in the late third century, when the Emperor Diocletian divided the Empire into two halves – the Western Empire seated in the city of Milan, and the Eastern Empire in Byzantium (Constantinople). As Constantinople of the Eastern Empire grew in wealth and military strength, the Western Empire literally died on the vine from lack of resources and military support. Thus while Rome fell in 476, Constantinople would endure for another 1,000 years until it fell in 1453. Gibbon writes about overexpansion and military overspending. At its zenith, the Roman Empire extended from the Atlantic Ocean to the Euphrates River in the Middle East, however its magnificence would ironically be the reason for its decline and eventual destruction. Increasing amounts of limited resources were constantly sent to Gaul, Germania, Britannia and other provinces to hold the Barbarian tribes at bay, nevertheless technological development was reduced and Rome's civil infrastructure fell into deterioration.

Gibbon writes about government exploitation and political unrest as another cause of Rome's fall. Rome's vast size and cultural diversity made it virtually impossible to rule over effectively. The Empire was rife with insurrection and internal political chaos that at one point in a 75 year period more than 20 emperors were on the throne; each subsequent emperor often murdered their predecessor. The Praetorian Guard – the emperor's personal bodyguards – assassinated and replaced new emperors at will. Also, like today's U.S. Congress presently controlled by Quisling Republicans, the Roman Senate failed to balance the numerous excesses and grotesqueries of the emperors by reason of its own pervasive corruption, cowardice and duplicity. Thus, as Roman society descended into existential chaos, national pride diminished and many Roman citizens grew cynical and lost confidence in their leadership; lost faith in what it meant to be truly "Roman."

The influx of the Huns and the Barbarian tribes forming alliances was another major cause of Rome's collapse. The Barbarian attacks on Rome to a degree was due to large migration patterns instigated by the Huns' conquest of Europe in the late fourth century by legendary Mongol leader, Attila the Hun. Hun warmongering pushed numerous Germanic tribes out of their lands in the east westward to the boundaries of the Roman Empire. The Romans reluctantly allowed the Visigoth tribe to cross south of the Danube and into the protection of Roman territory, however they treated them with extreme cruelty. According to the historian Ammianus Marcellinus, Roman officers were merciless to the Visigoth tribes and even forced the Goths to sell their children into slavery in exchange for dog meat to keep from starving to death. Roman atrocities pushed the Goths to revolt and during the Battle of Adrianople in A.D. 378 the Goths defeated a Roman legions and killed the Eastern Emperor Valens. This loss of territory eventually led to the sacking of Rome by the Goth King Alaric in 410. With Rome now exposed, Germanic tribes like the Vandals, the Anglos, and the Saxons flooded across its borders and eventually inhabited Britain, Spain and North Africa.

Another reason why Rome fell according to Gibbon is because the decline of Christianity and the collective defilement of moral principles. The fall of Rome coincided with the rise of Christianity under Emperor Constantine's Edict of Milan which legalized Christianity in 313, and in 380 Christianity became the official religion of the Roman Empire. Nevertheless, Christianity replaced the polytheistic Roman religion with monotheism and exchanged the pomposity of emperors for the pomposity of popes, thus entrenching a bureaucratic hierarchy of clergy who over the centuries became excessively rich on the alms of the poor and in many respects eventually became more decadent and corrupt as the Roman Emperors who were replaced by the Catholic Church. Gibbon was famously anti-organized religion, but not anti-Christian therefore in chapter three of Gibbon's History he wrote, "The influence of the clergy, in an age of superstition, might be usefully employed to assert the rights of mankind; but so intimate is the connection between the throne and the altar, that the banner of the church has very seldom been seen on the side of the people."

Finally, Gibbon cited the growing internal corruption and weakness of the Roman legions that put the death knell to the Roman Empire. Impotent to recruit sufficient soldiers from the Roman population, emperors like Diocletian and Constantine began employing alien mercenaries as auxiliary soldiers to augment the Roman Legions. Germanic soldiers like King Alaric and Odoacer possessed no real allegiance to the Empire, and in time these and other Barbarian hordes would turn their military training they learn from Rome against her when they sacked the city of Rome and destroyed the Western Empire in A.D. 476.

In the late fourth century, the Western Roman Empire crumbled after a nearly 500-year rule as the world's supreme superpower. Historians have blamed the collapse on hundreds of different dynamics ranging from military catastrophes and obscene taxation to natural disasters and even climate change. Sound familiar? "This is no different than the stranglehold lobbyists, banks and corporations have on our government today. America, like ancient Rome, has this blind faith that we are superior to the rest of the world and it's our destiny to reign supreme forever. It's not gonna happen," according to commentator Michael Ruppert in the 2009 documentary, Prophets of Doom, "We are going to learn some hard lessons and adjust to some hard circumstances. But we do have choices. The American empire is going to fall, but we do not all have to fall with it."

Over 100 years ago at the dawn of the Progressive Revolution, with America's first Progressive President, Theodore Roosevelt (1901-09) running roughshod over the U.S. Constitution, Spanish philosopher George Santayana in his classic work, The Life of Reason (1905) warned America, "Those who cannot remember the past are condemned to repeat it." It happened in the Old Testament, in the Book of Genesis to King Nimrod and the Tower of Babel which fell; it happened to the great walls of Jericho and Troy; it happened with ancient empires of Babylon, Persia, Greece, Rome, England, the Soviet Union... Will America come to her eventual decline and fall like the British Empire... like the ancient Roman Empire? Gibbon seems to say Yes when he writes, "History...is, indeed, little more than the register of the crimes, follies, and misfortune of mankind." Likewise, Philosopher Santayana seems to have in mind the fascist administration of Hussein Obama and his irrelevant White House International Summit on Violent Extremism when he writes, "Fanaticism consists in redoubling your efforts when you have forgotten your aim."