January 26, 2010
On October 24, 2009, a little boy was born in Stollery Children's Hospital, in Edmonton, Canada. http://www.capitalhealth.ca/HospitalsandHealthFacilities/Hospitals/StolleryChildrensHospital/default.htm Isaiah James May was born oxygen-deprived, due to the umbilical cord being wrapped around his neck, and he suffered brain damage as a result. http://ca.news.yahoo.com/s/cbc/100119/science/canada_edmonton_edmonton_child_court_rules_ventilator_not_removed There is now a legal battle that pits his parents, Isaac and Rebecka May, against the hospital's doctors, who want to remove a ventilator from Isaiah because, they claim, the baby is suffering from "irreversible brain damage." The next court date is set for two days from now, January 27. 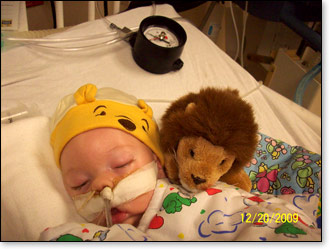 According to the latest news reports, the lawyers for both the parents and the doctors will appear before Justice Michelle Crighton, and the hope is that they will have agreed on independent expert witnesses who can assess the baby's condition. As one report states, "In a letter dated Jan. 13, the clinical director for the neonatal intensive care unit told the Mays that Isaiah's physicians believe that removing the child from the ventilator is medically reasonable, ethically responsible and appropriate." http://ca.news.yahoo.com/s/cbc/100119/science/canada_edmonton_edmonton_child_court_rules_ventilator_not_removed

Dr. Paul Byrne, a neonatologist with nearly fifty years of experience, who has been advising Isaac and Rebecka [Isaiah's parents], told LifeSiteNews yesterday how Stollery Children's Hospital has refused to give baby Isaiah appropriate and standard care.

"Besides putting Isaiah on a ventilator, he said the doctors have not conducted blood tests or blood counts, and that the hospital has refused to do a tracheotomy, which would be standard in Isaiah's case, despite Isaac and Rebecka's pleading.

"I have a hard time believing how all of this is going on, but on the other hand, I don't have [a] hard time ... in the sense that these things are going on much more commonly than anybody ever realizes," he said.

He is doing everything they said that he would not do. Every day he does something new. ... His eyes dilate. He opens his eyes. He moves his limbs. He's growing. He's gaining weight. He's living. They told us he would never do any of that.

When I first heard of this little child and his plight, I was immediately drawn to something the prophet Isaiah proclaimed: "The Spirit of the Lord God is upon me, because the Lord has anointed me to bring good tidings to the afflicted; He has sent me to bind up the brokenhearted..." http://catholicexchange.com/2010/01/01/87584/.

Christ repeated those words to describe Himself as He taught in the synagogue in Nazareth. Christ told them, "Today this scripture has been fulfilled in your hearing." http://www.ewtn.com/vbible/search.asp?abbr=Luke&ch=4&bv1=14&ev1=21 Christ made a miraculous proclamation that many who heard Him refused to believe.

And so it appears to be with baby Isaiah, who is accomplishing much in his life that many swore he would never be able to do, and yet they persist in demanding that he be put to death by denying the oxygen Isaiah needs to breathe. Who is to say that this little baby will not continue to make progress, defy the odds and give witness by his existence to the power and the mercy of God?

Will this precious child be given the time his parents are asking in order to ascertain his progress properly or will we witness his death by suffocation?

Only time will tell of course, but as my dear friend, Mark Pickup, who is intimately involved in the case, has written, http://humanlifematters.blogspot.com/

Apparently nobody told baby Isaiah he's brain dead. The little fighter is making progress  albeit painfully slow  but each day he does something new. He has gained weight, he responds to pain, he moves his limbs, responds to pain, occasionally takes a breath over the respirator. His mom Rebecka says she sees new things in her baby every day. Despite this, the hospital is intent on removing baby Isaiah's respirator. Rebecka and Isaac May sent their lawyer to court to press their case for another 3 months.

The judge stopped the hospital from removing Isaiah's respirator and gave the parents' lawyer until January 27th to find alternate expert opinions to counter the treating physician's opinion that further treatment is futile.

I sent out an appeal across North America for names of another neonatologist to counter the view that Isaiah's position is hopeless. Names started coming in and I forwarded them to the family's lawyer. She will provide the medical records of Isaiah, along with video of him, http://alexschadenberg.blogspot.com/2010/01/watch-video-of-baby-isaiah-moving.html and ask for their assessments.

The case of baby Isaiah is gathering attention from around North America. I was contacted by a New York radio talk show, as well as other media from across North America. ...

If the Alberta court sides with the Edmonton hospital's stated intent to kill baby Isaiah, North America will be watching. Good. There has been too much infanticide and euthanasia happening quietly in hospitals across North America. It's time the hush stops! We need to protect disabled and vulnerable people, not kill them. If the court sides with killing baby Isaiah, and against his loving parents, it will be time to ask ourselves: What kind of people have we become!?

Rebecka and Isaac May are asking for 90 days to see if Isaiah makes progress. Is that asking too much?! Some people have brought up the expense as reason not to grant a 90 day reprieve for Isaiah. After all, they say, "Alberta's Health Care system is in financial trouble." That's a selective financial concern. We pay for thousands of abortions each year, no questions asked. A woman can have an abortion for any reason what so ever or no reason at all. She doesn't even need a doctor's referral. Just call up the abortion clinic and make an appointment. She can have as many abortions as she wants. It's all covered at taxpayers' expense. Millions upon millions of taxpayers' dollars are spent each year for abortion on demand! Don't tell me we can't afford to care for a sick baby boy by the name of Isaiah James May.

Medicine and health care are supposed to be life affirming not life denying. Remember, history ultimately judges societies based upon how they treated their weakest and most vulnerable people.

Mark is correct. This case is actually a stunning example of the culture of death manipulating words in order to achieve the desired effect which, in this case, is public acceptance of the argument that indeed there are lives unworthy to be lived. While such an attitude is clearly both heartless and lacking all genuine compassion, there are many who define tenderness precisely in terms of putting others to death, telling us that it's the right thing to do because nobody should have to suffer like that.

This is why novelist Flannery O'Connor's perspective on the true meaning of tenderness/compassion is worth repeating over and over again. As she so wisely wrote, http://reallove.net/articlesContent.asp?AID=59 "In the absence of faith, we govern by tenderness. And tenderness leads to the gas chamber."

As we watch and wait, praying, along with Isaiah's parents, that justice will be served, it is important to recall what justice actually requires, since we know that justice is a virtue. According to the Catechism of the Catholic Church #1807, http://www.scborromeo.org/ccc/p3s1c1a7.htm#1807

Justice is the moral virtue that consists in the constant and firm will to give their due to God and neighbor. Justice toward God is called the "virtue of religion." Justice toward men disposes one to respect the rights of each and to establish in human relationships the harmony that promotes equity with regard to persons and to the common good.

In the case of baby Isaiah, the just thing to do is to recognize that he is, in every sense of the word, a human being who is equal to every other human being. Further, respect for the parental request to give this child the opportunity to continue improving is fundamental to a just society  one in which parents are the primary decision makers for their minor children.

If you wish to provide your perspective on this to the proper authorities in Canada, please use the contact information included below in this excerpt from Mark Pickup's blog: http://humanlifematters.blogspot.com/

I ask readers of this blog to contact Stollery Children's Hospital to let them know you expect that world-class facility to do the right thing and give baby Isaiah May 90 more days to improve before removing his respirator. That's not asking too much of the hospital.

Ask him to give baby Isaiah 90 more days on a respirator as his parents requested. Copy your email to Alberta's health minister at health.minister@gov.ab.ca

Finally, pray that justice will be served.