"That attack on children yesterday had a big impact on me. Big impact. That was a horrible, horrible thing." – President Donald Trump, April 6, 2017

When Syrian President Bashar al-Assad reportedly used chemical weapons against his own people, U.S. President Donald Trump answered with punitive missiles. Assad violated previous agreements, said Trump, and the United States had a security interest "to prevent and deter the spread and use of deadly chemical weapons."

But ultimately, Trump said, it was the cruel destruction of children that stirred him to act. 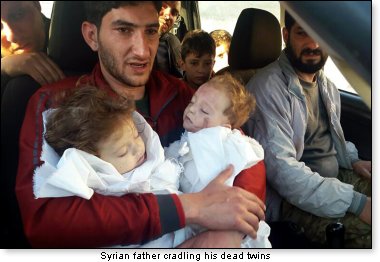 Sen. Mike Lee declined to support the attack and said "we should follow the Constitution and seek the proper authorization from Congress."

In either case, preserving innocent life is understood to be the primary reason for governmental force. Our Declaration of Independence asserts that governments are instituted to protect God-given rights – with first consideration given to the right to life.

While debate continues to surround the critical issue of whether Trump followed the Constitution in his exercise of war powers, the underlying moral principle remains unchallenged. No one disputes the assertion that governments have the responsibility to protect innocent life (presumably in ways that are both constitutional and just).

"When you kill innocent children, innocent babies, with a chemical gas that is so lethal that people were shocked to hear what gas it was, that crosses many, many lines – beyond a red line," Trump told the press following his action against Syria.

Immediately after the strike, Trump took to the podium to explain that "Assad choked out the lives of helpless men, women, and children. It was a slow and brutal death for so many. Even beautiful babies were cruelly murdered in this very barbaric attack. No child of God should ever suffer such horror." 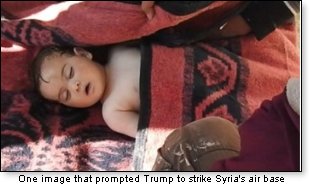 The president appealed to universal conscience: "Tonight I call on all civilized nations to join us in seeking to end the slaughter and bloodshed in Syria and also to end terrorism of all kinds and all types."

Then, the president concluded with a prayer and a caveat: "We ask for God's wisdom as we face the challenge of our very troubled world. We pray for the lives of the wounded and for the souls of those who have passed, and we hope that as long as America stands for justice, then peace and harmony will in the end prevail."

Images of dead babies were broadcast to the world. Trump called their murder an "affront to humanity," worthy of severe punishment.

Senator Marco Rubio tweeted: "'Be sure of this: The wicked will not go unpunished' Proverbs 11:21 #SyriaChemicalAttack."

"We rededicate ourselves to holding to account any and all who commit crimes against the innocents anywhere in the world," Secretary of State Rex Tillerson affirmed.

YET, in the United States of America, tiny babies are being slaughtered with the complicity of government. Today, more than three thousand children were dismembered to death – torn out of their mother, piece-by-piece – chemically burned inside the womb, poisoned, punctured, or executed by other means. Our bloody deeds have exterminated over 60 million lives in a half century.

All of this has been occurring while American elected officials sit idly by – unmoved to act lawfully to end the bloody, evil deeds of barbarism in their homeland.

"I'm just following orders" is the defense. But that line of reasoning was repudiated in the case against Nazi Germany. The Nuremberg trials rightfully demonstrated that there is a moral requirement incumbent upon all mankind to do justly, and to reject any legal facade that would exterminate innocent human beings.

For elected officials who refuse to carry out their just powers on behalf of helpless victims, there is particular culpability.

Under the logic of the human rights doctrine articulated by the Secretary of State, the President of the United States can and should act tomorrow, in America, to end the terrorism against beautiful babies in the womb, babies who are no less children of God – created in His image and endowed with the right to life – than those walking the earth.

Syrians are also human beings, endowed with the right to life. So by the same moral logic that compelled the president to defend lives in Syria, he should immediately defend the babies being slaughtered in the United States.

That is especially true if the president is constitutionally powerless to pursue justice in a far-off nation without congressional approval. There, the Constitution imposes constraints not relevant here, where the president has considerable power as chief executive to protect life in accordance with the rule of law. That's his job. The president is sworn to faithfully (not partially) execute the laws, which require equal protection for those under his jurisdiction.

In our nation, the law is on the side of the innocent – no matter the myths perpetrated in the media.

"In a landmark ruling today, the Supreme Court legalized abortions," declared Walter Cronkite on the evening news, January 22, 1973. But the newsman was mistaken. The Supreme Court could not make law, nor could it require the president to aid and abet crimes against humanity.

We have three branches of government, each designed to check and balance one another – to prevent alienation of human rights – and the president is sworn to execute his office under the Constitution "to the best of [his] ability," not according to the pleasure of judicial tyrants.

Would Assad be excused for gassing his people to death, if done by the command of his own courts?

Would Nazi criminals be excused at Nuremberg because Hitler's corrupt judicial system enabled their reign of terror, including the Holocaust? 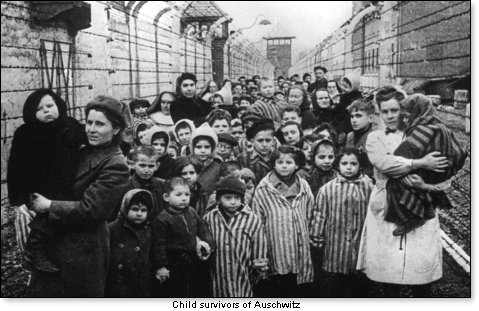 So why would an American president be compelled to enable brutal extermination of children in the womb simply because of a court opinion?

We are without excuse. With the Declaration of Independence's assertion that "all men are created equal, [and] endowed by their Creator" with the right to life, and the Constitution's stated purpose to "secure the blessings of liberty to ourselves and our posterity," and the Constitution's requirement to provide equal protection, the United States at its core delineates a bright, red, unmistakable line of justice that has now been crossed 60 million times.

As our nation’s chief executive, the president is required to “take care that the laws be faithfully executed” (Article II, Section 3, of the Constitution). He therefore has the power to prevent the judicial killing of innocent babies – by refusing to uphold unjust court rulings that he is under no constitutional obligation to uphold or enforce; by using his bully pulpit to enlist Congress and all 50 state legislatures to outlaw abortion, once and for all; by declaring Roe v. Wade null and void as far as the executive branch of the U.S. government is concerned; by declaring a clear federal policy that lends no credence, support, cooperation, or manpower to the extermination of the unborn; and other executive actions that are within his constitutional prerogatives.

Even if the Supreme Court were to adamantly protest such bold action, along with a loud chorus of leftists in the Democratic party and the liberal media, the president can do much more than he thinks to defend and protect the unborn, setting an example for others to lawfully and peacefully follow and changing the public mind on abortion.

So it is that we must urge the president to act, today, without delay. We cannot afford to wait for judges to do the right thing – nor should we permit elected officials to ignore the Constitution while they wait for orders from the bench. Even Assad is allowed no excuse.

Let's stop playing the hypocrite. Let's protect, once again, our beautiful babies – all of them – and take the righteous stand for justice that provides a guiding light to the world.

Unless we do this, as President Trump admits, we cannot expect peace and harmony to prevail. 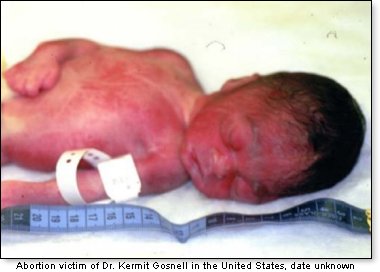 Siena Hoefling and her husband, Tom, are longtime pro-life activists from Iowa.

VIDEO: “Protect the Children," with the song "Prayer of the Children" performed by Three Dog Night