Judie Brown
The doggie in the window, the baby in the grave 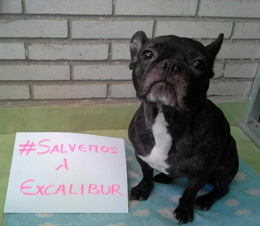 Here is the first sentence of a news report that came to my attention recently: "With more than 3,400 people dead in west Africa and 7,500 infected in the latest Ebola outbreak, 300,000 people sign a petition demanding action . . . to save an infected dog." This was twice as many people as those who signed a petition demanding a cure be found for the deadly virus.

Wow! I actually had to read this twice as it blew my mind that so many people the world over would put their names on a petition to save a dog that could have been infected with Ebola. This dog, Excalibur by name, was an Ebola patient's pet.

In addition to the petition, more than 400,000 "pet lovers around the world have flooded social media with adorable pictures of their animals as part of an international campaign to save the dog at the centre of an Ebola row in Spain."

As it turns out, the dog was "put down" Wednesday by Madrid's regional government. But the fact of the matter is that the plight of this one pet generated more interest and involvement than a single preborn child threatened and then killed by the act of abortion.

There is something dramatically wrong with this picture.

Think about the manner in which the media treated the euthanizing of this animal: "The beloved dog that captured the hearts of hundreds of thousands of people and may have contracted Ebola was euthanized Wednesday afternoon, according to Spanish news outlets. Dozens of protesters stood outside the apartment calling medical workers 'murderers!'"

As my dear mother might have said, "Now, if that doesn't beat all, I don't know what would!" For those not familiar with that expression, it means the same as me saying to you, "Say What?"

Incredible! Unbelievable! But true; and therein lies the problem.

Now, for the record, I love dogs. We had dogs throughout my childhood and our children were raised with dogs, birds, and sundry other pets. However, what is mind-boggling about this particular doggie story is the public's response to it. Just put it in perspective, please.

Unbelievably, there is an absolute absence of passion among the general population when it comes to the act of aborting a preborn child. This is so even though 3,000 preborn children are murdered every single day. They are killed under cover of law, of course, but so was the Spanish pet.

However, a dog is not a human being. Unlike dogs, human beings are endowed by God with certain inalienable rights – including the right to life.

So give me a break!

I pray for the day when the news media reports this: "The beloved preborn babies who are capturing the hearts of millions of people are finally going to be spared. The killing that takes place prior to the birth of these children has been outlawed and the crowds are teaming in the streets, celebrating life and family – and of course the babies. The culture of death is dead."

Now that's a news item worthy of our praise.

Until then, let us never forget that it is our obligation to
REMEMBER: The doggie in the window would enjoy playing with that baby who sadly was sentenced to death and tossed in the grave of our depravity.

We must change that.