November 6, 2016
ALL's Culture of Life Studies Program and Life Defenders shine the light of truth and teach us how to respect the lives of all human beings.

During this month of political maneuverings it might be easy to overlook the challenges that face those who work to restore respect for the gift of human dignity bestowed by God on every human being. Nevertheless, these challenges are real and ever present.

For example, perhaps you have not heard that, according to LifeNews, "Planned Parenthood asked a judge Tuesday to throw out an Indiana law that protects unborn babies from being aborted solely because of their sex, race or a genetic disorder like Down syndrome." Planned Parenthood has joined forces with the ACLU requesting that this law be temporarily blocked until a court case can ensue. While this may sound a bit unbelievable to some, it is not at all shocking to us. After all, when killing is your business, you must do all you can to eliminate roadblocks that create losses to your bottom line.

What should really disturb you about this latest Planned Parenthood act is that no matter what happens at the polls, it seems likely that Planned Parenthood will move ahead with its agenda as long as the court system in America is so pliable in its grubby hands. That's what happens when a corporation founded on the execution of dastardly deeds has functioned unchecked for more than 100 years.

My sense is that the tide is turning away from PP's deadly business tactics and toward a generation of young people inspired by hope. Just days prior to this most recent news item, the Culture of Life Studies Program published a helpful resource for teachers along with a toolkit to help them share this message of love. The Down Syndrome Awareness Month Toolkit focused on the reasons why, during Respect Life Month – or any time of the year – children with Down syndrome deserve to be celebrated as the special gifts they are, rather than targeted by Planned Parenthood.

Down syndrome is not a terminal illness; it is a condition that challenges and at the same time brings joy to families and to the culture at large. Michelle Mahnke, whose blog was featured by CLSP as an example of how individuals and families can "face disability, disease and mental illness together" wrote an article entitled "When My Daughter With Down Syndrome Hugged the Crankiest Man in Church." Her words are just a sampling of the positivity we can bring to a world too interested in eliminating the so-called inconvenient, rather than embracing them and loving them unconditionally.

This is why American Life League's Life Defenders has launched its See Dignity campaign, which, on December 3, will celebrate those who have disabilities.

Kurt Kondrich, another source of inspiration, says it best:


My awesome daughter Chloe was born in 2003 with a diagnosis of Down syndrome, and my wife and I declined prenatal tests during the pregnancy when we were informed many times that we were at "high risk" for having a child with Down syndrome. We knew . . . that Chloe's life mattered, and at age 13 she has brought more pure light into the world and planted more positive seeds than the vast majority of people do in a long lifetime. We daily read about a lost world infected with death, depravity, and deception, and I have never read a story where an individual with Down syndrome was responsible for an act of violence, evil, hate, destruction, or terror. Today's misguided culture needs these people now more than ever, and isn't it time that we start a united international LIFE movement to end toxic profiling and prenatal prejudice and get the truth out that ALL Lives including Down syndrome lives matter?


Our joyful response to the dastardly deeds of Planned Parenthood and others shines the light of love because celebrating the lives of our fellow human beings is always the best antidote to the purveyors of death.

Pray, teach, affirm, and give thanks that God has placed us in this world at such a time as this. Learn more about our Culture of Life Studies Program and Life Defender's See Dignity campaign. Be part of the solution.

And while you are at it, get involved with Stop Planned Parenthood International so that you can be one of those who can one day say "We stopped the most evil organization in the history of our nation – Planned Parenthood." 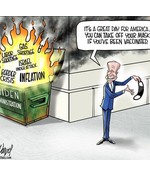