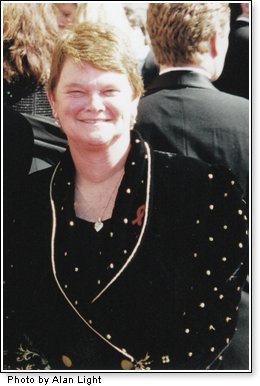 Angela Marsden is a victim of the COVID-19 pandemic and she does not have the virus. Those who still believe that pandemic politics are for our own good had best check out Ms. Marsdens heart-wrenching video that went viral last weekend.

The Los Angeles restaurant owner complied with all COVID-19 restrictions enforced by Mayor Eric Garcetti and Governor Gavin Newsom, but she is being forced to keep her outdoor bar and grill shut. Like many restaurant owners, she has done everything required to meet strict pandemic restrictions. She spent over $100,000 making changes they wanted her to do.

But as Ms. Marsden tearfully explained in her video, the outdoor dining ban applies to her business but not to the Hollywood film crew from Channel 4 that is allowed to set up tents for their crew to dine outdoors.

Ms. Marsden will not only lose her investment if her restaurant goes under, but she had to let her staff go. Now they are out of jobs. Now, their kids wont get gifts for the holidays.

The New York Times takes a subdued tone on the womans plight, noting that health officials explained they must slow the surging pandemic:

Ms. Marsden had already organized a protest against the outdoor dining ban before discovering the film tents. On Saturday, she and others gathered outside County Supervisor Sheila Kuehls house, saying the governments uneven application of the rules was crushing small businesses.

You see, this is an example of how Democratic politicians, health officials and government bureaucrats show how much they care about the little people and the poor, the ones they claim to represent. But they are happy to cater to rich Hollywood donors who give millions of dollars to fund their campaigns.

The Chinese virus is real. However, the American COVID-19 panic and politics are fake and a sham. Would you like a vaccine or a dose of reality? You want to know what the masked madness and lockdowns are really about? Its an exercise by our government officials in mind control and compliance in preparation for an election which they knew in advance they were going to rig. This was a road test to see whether American passengers would dutifully wear their seat belts (face masks) while government bureaucrats drunk on their power sat in the drivers seats and raced down a mountain crashing freedom over the edge of a cliff.

Theres evidence that masks dont work. Nobody wants to get sick with the Chinese virus. Least of all the Hollywood elite. Actors and actresses are very good to themselves. If the virus were that deadly, they would not be dining out in violation of L.A. State and County Health officials directives.

Its funny too, how there is a long list of governors, mayors, county officials and other leftist political hacks who dictate that all Americans must wear their masks, but they dont comply with their own orders. But then, Democrat politicians frequently violate their edicts, dining out at exclusive restaurants like The French Laundry at $300 a plate. Ive heard every lame excuse in the book by their defenders: Theyre human. And their constituents are not? Sorry, not good enough. Besides, if masks and lockdowns work, why would anyone including snobby, rich Democrats like Gov. Gavin Newsom want to put their own health and lives at risk by going out in public without a mask?

Because the politicians know something YOU dont. They know its all B.S. However, if people are willing to obey like sheeple and follow the COVID-fascistic orders, they are more likely to meekly accept a rigged election and not protest the results. The lockdowns were dress rehearsals leading to the final performance.

If you happen to be a passenger that survived the wreckage, the only thing left to do is protest. Keep it peaceful and keep your businesses open if you can. Dont listen to these fools. They are all actors.

That reminds me. I have a message for Los Angeles County Supervisor Sheila Kuehl, who dined out at her favorite restaurant right after she voted to ban outdoor dining. I remember you when you were Sheila James. I liked you a lot better back in the day when you played Zelda Gilroy on my favorite TV show, The Many Loves of Dobie Gillis. I was a big fan. That was a great show. You should have continued as an actor. Oh, I forgot. You have.

In 1999, Bonnie Chernin founded Jews For Life, the first pro-life website reflecting the traditional Jewish pro-life viewpoint on abortion and assisted suicide. In 2018, Bonnie launched The Jewish Life League. Bonnie believes that life, both born and unborn, is sacred and must be protected. Bonnie is an accomplished classical pianist and prolific writer. She is a Certified Professional Coach assisted in achieving their life and career goals.