September 8, 2013
You may have heard the story about the drunk who was paid to sit up all night at a funeral home in a viewing room with an open coffin. He was to be there should anyone come in late to pay their respects. The town drunk didn't know it, but the whole thing was a set-up by some fellows playing a practical joke. In the quiet of the early morning hours, the man in the casket suddenly sat up and let out a horrific scream. Without even flinching, the drunk staggered over to the body, pushed it back down, and said, "If you're dead, lie down and act like it."

Few matters have initiated more litigation in the courts than the presence of Ten Commandments monuments and other displays of the Decalogue across the country located on public property. The presence of most of these is the result of a joint campaign by the Fraternal Order of Eagles, working with Hollywood Royalty and movie-magnate, the late great Cecil B. DeMille. Today the radical left has erroneously argued these displays are an unconstitutional violation of the "separation of church and state" and disparage them as nothing more than a publicity stunt by DeMille to hype his movie at the time, The Ten Commandments, staring Charlton Heston. But if DeMille's motives were purely carnal, then his history with the film certainly didn't show him acting like it.

According to Bruce Feiler's research in his book, America's Prophet: Moses and the American Story, DeMille was working to counter the direction of the times. He writes:


"The undermining of the central plank of American life that began in the late nineteenth century did not abate in the early decades of the twentieth century. Even as World War I triggered a temporary surge in faith, and Darwinism and other forms of modernity led to the blossoming of fundamentalism, the Bible continued to recede as the ultimate source of authority in contemporary life. Americans attended church in extraordinary numbers and espoused a near universal belief in God, but they relied less on the Bible as the chief source of public rhetoric. By the close of the 1930s, one scholar wrote, Americans had grown accustomed to using 'a secular rather than theological vocabulary when issues really seemed worth arguing about.'" [1]


Feiler also notes DeMille was born on August 12, 1881, to Henry DeMille who was an Episcopal lay minister and playwright from North Carolina. DeMille, with affection, could remember his father teaching Bible classes in their home every Sunday and reading a chapter from the Old and New Testaments each night. He got the idea for the movie, The Ten Commandments, from a contest Paramount Pictures held to solicit subjects and stories for film. An oil manufacturer wrote in and suggested a tribute to biblical values, saying, "You cannot break the Ten Commandments – they will break you." DeMille stated the idea resonated deeply with him. "Here was a theme that stirred and challenged me in the heritage of being Henry DeMille's son," he said, "a theme that brightened memories of his reading the Bible aloud to us and teaching his sons that the laws of God are not mere laws, but are the Law." [2]

Feiler rightly argues that DeMille's purpose for the movie was to try and reclaim the importance of a strong cultural morality in America, even recalling the film's opening card that read:


"Our modern world defined God as a 'religious complex' and laughed at the Ten Commandments as OLD FASHIONED. Then, through the laughter, came the shattering thunder of the World War. And now a blood drenched, bitter world – no longer laughing – cries for a way out. There is but one way out. It existed before it was engraven upon Tablets of Stone. It will exist when stone has crumbled. The Ten Commandments are not rules to obey as a personal favor to God. They are fundamental principles without which mankind cannot live together." [3]


It should be remembered that DeMille did two productions of The Ten Commandments, the first filmed in black and white as a silent picture during the rise of the immorality of the roaring twenties (1923), and the second epic in color featuring Charlton Heston at a period when the Cold War (1956) was heating up. Soviet Russia was a godless communist state and its atheistic system was threatening to swallow up the world in the latest form of tyranny. Loren P.Q. Baybrook, editor and chief of Film and History, says the four-hour remake of the 1923 film was "a declaration from Hollywood that American values, as opposed to Soviet values, were part of the longest history of moral principle." [4] In the second film, DeMille once again saw the need for reminding America of its strong Judeo-Christian heritage and what had distinguished its place as the most free and prosperous people in human history.

Part of that effort would include a partnership with Judge E.J. Ruegemer and his fellow Fraternal Order of Eagles to distribute copies of the Decalogue for placement in courtrooms and schools and to erect monuments to the same throughout the country. 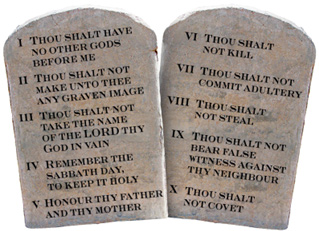 Neither Judge Ruegemer nor DeMille could foresee that the secularists, humanists, and atheists of our day would feverishly work to remove these statutes and other presentations on public property as unconstitutional. And why should they? The very purpose of America's first and most cherished liberty, the First Amendment, requires the state accommodate religion and prevents government from demonstrating any hostility to it. Moreover, the First Amendment has never been about precluding the state from its own ability to acknowledge God and religious principle. In fact, in the United States Supreme Court, inscribed directly overhead of its Chief Justice, is a depiction of Moses and the Ten Commandments. The centrality of that display before the highest court in the land was meant to clarify that all our laws are based upon and derived from that timeless religious moral code.

Yes, the godless among us can argue, if they choose, that DeMille's campaign for exhibitions of the Ten Commandments was largely nothing more than a publicity stunt for his movie, but they would be wrong – very wrong. Instead DeMille and his colleagues were concerned that America should never lose its soul. They didn't want us to forget that this country was birthed as a Christian nation, and, if liberty and fortune are to survive in our midst, we'll need to act like it.

[4] Elis, Niv "The Film that Launched a Thousand Court Cases," Moment, From the 2011 January-February issue, posted online May 2013 http://www.momentmag.com/the-film-that-launched-a-thousand-court-cases/