January 21, 2013
It has now been well documented throughout both the sports world and the business world, that the National Football League (NFL) has enjoyed unprecedented growth in revenue as a professional sports league, and most notably in the past decade. 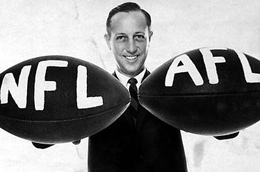 And as the NFL approaches a $10 billion annual take, its largely billionaire team owners have grown quite accustomed to such returns becoming routine and continuing infinitum.

But a wave of lawsuits against the NFL, well publicized in the past many months, may not only put a crimp in future revenue for the NFL, but also in how the rules of the game could ultimately be revised.

This reporter's original intent, for this article, was to follow-up on the piece written in February 2009, entitled NFL & Retirees Remain in Tussle On Benefits, by Diane M. Grassi, regarding the status of the disability benefits of NFL retirees prior to 1993.

But the issue of neurocognitive disorders and the NFL's liability has since then surfaced with a vengeance, and cannot be ignored. And as the result of chronic blows to the head, possible brain injuries during the course an NFL career could be decided by the courts.

Yet, such an issue should not be discussed without acknowledging the plight of the players of the past, who still largely continue to go without; those players still suffering from a variety of disabilities without adequate compensation to cover escalating medical costs and living expenses. Yet, such players formed the foundation of the NFL, as we know it, today.

And such new focus by the NFL, the National Football League Players Association (NFLPA) and other players from the past, as well as those currently active, with their concern of cognitive disorders, has led to placing the original retiree complainants on the back-burner, once again. However, in order to establish liability for a variety of brain disorders, scientific medical data confirmation requires more research.

Citing public opinion, both factual and otherwise, that concussions of players over the course of an NFL career is given to chronic cognitive disorders prior to or after they retire, has led to no less than 113 lawsuits filed against the NFL and by extension, against its teams and owners.

Such lawsuits were primarily filed in both federal and state courts by mid-2012, after the latest Collective Bargaining Agreement (CBA) was ratified in 2011, between the NFL and the NFLPA.

Yet, it seems that the CBA of 2011 has only made the relationship between the NFL and the NFLPA even more contentious, with issues such as the NFL still pushing for an 18 game season and the already CBA mandated testing of Human Growth Hormone (HGH), unresolved.

But many disabled and retired players of past generations, or pre-1993, feel like they are still on the outside looking in, with neither the NFL nor the NFLPA doing their bidding for better pensions and health care benefits for them, and essentially left with no representation at all.

Even though the Legacy Fund was formed as the result of the 2011 CBA, whereby the NFL and the NFLPA contribute $300 million dollars each over the next 10 years, for the pre-1993 retirees its mechanism of distribution and how the health care and disability costs will be administered for these "old guys" remains to be seen. It largely remains a paint-by-numbers approach to setting up a retirement fund in a rather arbitrary fashion. And the average monthly additional benefit totals only $1,000.00.

The legality of such a retirement fund without specific designation as to how it will be distributed for health care or hardship in addition to a pension, could conceivably result in another lawsuit. To wit, the wives or heirs of these pre-1993 players were entirely cut out of Legacy Fund benefits if their spouses were deceased prior to the date of the ratification of the 2011 CBA.

Meanwhile, of the dozens of other lawsuits against the NFL, approximately 80 have been thus far consolidated in the U.S. District Court, Eastern District of Pennsylvania, and quite a few other individual suits have been filed there and in other jurisdictions, as well. The largest suit, which represents over 2,000 litigants, is representative of the nearly 4,000 total litigants of former players; some of whom played in various decades.

The suits versus the NFL, in most cases, also includes the NFL's exclusive helmet manufacturer, Riddell, Inc., as a defendant. They allege that, "The NFL had a duty to acknowledge and address the risks of neurological injury, but instead deliberately and fraudulently ignored and concealed this information from its players."

The basis of the lawsuits stems from the NFL's initiative in 1994 to create the Mild Traumatic Brain Injury (MTBI) Committee. Then NFL commissioner, Paul Tagliabue, intended to supposedly study the impact of head injuries on players. The lawsuits, however, intend to prove that the MTBI Committee deliberately published falsified findings, which stated that no long-term negative health consequences were associated as the direct result of concussions sustained by NFL players.

At the time, the MTBI made the conclusion that hits to the head by football players is dissimilar to those of a prize fighter, who might sustain repeated blows to the head over an hour or so, rather than in many games spread out over the course of several seasons.

And because the NFL settled several lawsuits in the late 1990's and early 2000's, such as the one with Hall of Famer, Mike Webster, who was found to be totally and permanently disabled due to head injury, and who died at age 50 in 2002, legal experts believe that they may have found the smoking gun, as those settled suits implicate the NFL.

The present litigation contends that the NFL ignored all fathom of medical research that showed concussions were linked to significant neurocognitive brain injuries. And in hindsight, the NFL opened up a veritable Pandora's Box of linkage to brain injury, when it formed its MTBI Committee back in 1994, whether or not some believe that it did so for sinister reasons.

One of the reasons that the issue of the present lawsuits remain important, however, is that the NFL, the NFLPA, teams, coaches and even present and former players may all be guilty of disseminating misinformation; for a variety of reasons, both good and bad. And medical research will need to catch up with the necessary evidence of cause and effect regarding brain injury, in order to dispel any inconsistencies or inaccuracies. We owe it to all of the injured players to get it right.

And those players impaired as the direct result of having played football, with challenges other than that of a brain injury may ultimately lose out to the big payday that class-action attorneys will celebrate; as litigators could very well do more damage to other disabled retirees, leaving interest in funding their health care needs in shambles, if not suffering from a brain injury; not to mention leaving the game of football, itself, shattered.

If we go back prior to the 2011 CBA, we find pre-1993 NFL retirees who have been battling the NFLPA for years and years for only their fair share of benefits. They simply wanted long-overdue disability compensation and better medical care coverage.

These are the players who never profited from the tremendous guaranteed signing bonuses and salaries enjoyed by players today. Some had to work in other occupations in the off-season, as many made somewhere between $5,000.00 – $35,000.00 a year.

The amount of salary that players presently receive has grown exponentially from $1.86 billion in 1999 to $4 billion in 2009, alone. And players today, or post-1993 retirees, receive an Annuity Plan benefit and additional access to the 2nd Career Savings Plan, to assist in their retirement.

In addition, as part of the 2011 CBA, a Neurocognitive Benefit Plan was established for post-1994 vested players. It will provide a minimum of $1,500.00 per month for a mild impairment, and then escalates from there based upon the severity of the injury. The neurocognitive benefit would be in addition to any physical disability benefit or pension benefit, for which the player might qualify.

So, if we add up today's guaranteed signing bonuses, salaries, personal endorsements, in addition to a bevy of retirement benefits, today's players are in a far more lucrative position to care for their futures than were their predecessors. But rather than begrudge today's players, the question should be asked, why does such a large disparity exist for the health care and quality of life benefits for pre-1993 players as opposed to today's?

The NFLPA has all but disengaged itself from the old timers, and historically has never had the backs of any of them. So, the mere additional crumbs that the Legacy Fund provides, might prove too little too late, as time literally runs out for these players.

And the NFLPA may rue the day that it agreed to open the floodgates for any and every kind of head injury, implying that such injuries are the cause of every cognitive disorder of aging players. For such legal claims may become inevitable and could eventually bankrupt the game of professional and amateur football, going forward.

In the interim, the NFL, including the NFPLA, will continue to fracture from within such as: the pitting of generations of players against one another; the prioritizing benefits for cognitive disorders over others such as orthopaedic or arthritic disease; changing current game rules to new ones without comprehensive analysis; NFL health protocols challenging the NCAA's – its minor leagues – rather than the collaborative effort of both.

And the NFLPA could potentially face legal liability for traumatic brain injury, for its failure to protect its own membership.

But to blur the picture – by the media, the NFL, the NFLPA and the legal experts – and to not make a clear distinction between the pre-1993 disabled NFL retirees and those post-1993, is but a disservice. And in light of these recent lawsuits, it but adds more salt to the wounds of these elder players; seemingly cast aside, time and time again.

And not unlike the federal government, which has become the master of the art of deception, derision and dominance of its constituents, the NFL and the NFLPA have but attempted the same such feats. And their ideology that football remains "just a game" is disingenuous at best.

If indeed the NFL as well as the NFLPA claim that players' health remains of the utmost concern, then both entities should begin with the bedrock of the game; its heroes of yesteryear, before it is too late.