May 12, 2010
I watched a History channel program about the War of 1812. Folks, I can not explain why, but the segment about the battle of Baltimore at Fort McHenry and the writing of our national anthem, The Star-Spangled Banner moved me to tears. 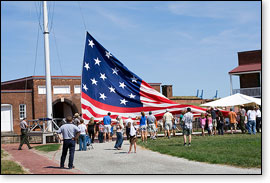 The British had burned down our U.S. Capital and the White House. The next step on the agenda of the seemingly all powerful British was an easy sea invasion of the busy port city of Baltimore. I was raised in Baltimore. All I knew about Fort McHenry was it was a historical site where they took kids on school buses for tours.

Little did I know of the huge role the battle at Fort McHenry played in the saving of America. 39 year old Major George Armistead was in command of 1000 troops at Fort McHenry defending the entrance to Baltimore Harbor.

Unselfishly, Baltimore merchants sunk the source of their income; the ships which imported the merchandise they sold in their businesses. The sunken ships created a reef or barrier stopping the British ships from coming in close. They were forced to fire their bombs and rockets from two miles away.

Major Armistead commissioned Mary Pickersgill, paying her $500 to sew two huge Garrison flags, 40 feet by something, one slightly smaller for the battle. Armistead knew it was extremely important for the British to see our flag from a distance.

With seven women helping, Pickersgill and her crew worked days and well into the nights sewing by candle light to get the massive flags completed swiftly.

Upon seeing the spectacular display of British power with ships as far as the eye could see, many Baltimore residents panicked and ran for their lives. For 25 hours the British pounded little Fort McHenry with over 2000 cannon balls and 700 rockets.

A cannon ball even hit the shack in the fort where a half million pounds of gun powder was stored. Had it exploded, the battle would have been over. It did not explode. As a Christian, I believe God protected our, contrary to your belief Mr Obama, Christian nation.

Frances Scott Key was a lawyer who did not agree with our war with the British. Key watched the battle from a truce ship in the Patapsco River. Key was on a mercy mission for the release of a prisoner held by the British. Key thought it was only a matter of time before the humble fort would fall. For Major Amristead and his troops to fight off and survive such bombarding from the mighty British ships would be impossible.

In the morning, finally, there was silence. To Key's amazement and pleasure, the U.S. flag over Fort McHenry was still waving. The British ships retreated off into the distance. Many say this battle saved America.

As a singer, I have performed the song hundreds of times never pondering the words. "Oh, say can you see by the dawn's early light. What so proudly we hailed at the twilight's last gleaming?" Wow, now I get it. Key was blown away that the flag was still there in the morning.

"Whose broad stripes...." Key was referring to the broad stripes sown by Mary Pickersgill and her crew. "...and bright stars thru the perilous fight,..." I envisioned the women in Pickersgill's crew sewing on the giant white stars. I began to weep.

Then it dawned on me. The battle at Fort McHenry is our heritage. It symbolizes who we are as Americans. We tea party patriots are the same as those patriots who defended Fort McHenry. We are them and they are us. Just as the patriots at Fort McHenry prevailed over the seemingly all powerful British, we modern day patriots will defeat the deaf to the will of the American people Obama anti-American regime.

Regardless of the odds or power of the evil against us, we fight. Why? Because we are Americans. Though we have strayed from our core principles and values, many Americans are still praying and God is still on our side.

This is why the Tea Party Movement / We The People will defeat the enemy within who is seeking to destroy our Founding Fathers' inspired vision of our country. How long are we willing to fight? To the end. And by God's Grace, we will prevail.