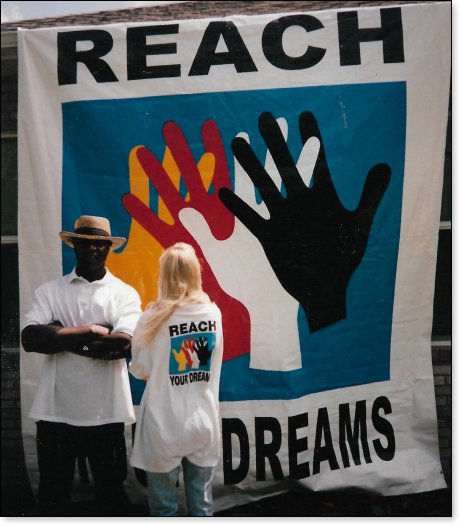 Hey, everyone. Mary stumbled across this picture buried in a box of old photos.

Before I began touring nationally on Tea Party Express in 2008, I designed an outreach campaign to take the good news of conservatism to the black community.

America is the greatest land of opportunity on the planet for all who choose to pursue their dreams. Anything else is a lie.

I titled the campaign Reach Your Dreams and designed the logo. I wanted the GOP to fund a tour with rallies. The rallies would feature great musical entertainment with minority speakers – black, Hispanic, and so on sharing their stories of why they chose the Republican party over the Democratic party.

Mary and I had recently moved from Baltimore to Florida and joined the Republican Executive Committee. I became a precinct chairman. A Washington D.C. GOP big-wig visited our executive club meeting.

The big-wig granted me an opportunity to make a presentation. Upon making my Reach Your Dreams presentation, the consensus of the GOP guy and local club members was Why bother? Blacks will always vote Democrat no matter what we do. My retort was we have a moral obligation to educate our fellow Americans to the virtues of conservatism.

Numerous times over the years, I have approached the GOP about my campaign, which would counter Democrats' and fake news media's false narrative that Republicans and conservatives are racist, mean, and only care about the rich. The GOP was uninterested.

Unable to attain funding or gain traction, Reach Your Dreams never became a reality. That void has been filled by Black Lives Matter.