October 5, 2010
Hi Folks, Tea Party singer/songwriter, entertainer and speaker, Lloyd Marcus reporting in after performing with Glenn Beck at Great Adventure in New Jersey. The rally was awesome. I have attended over two hundred tea parties touring on Tea Party Express. I am continually impressed by the caliber and number of first time candidates across America running for public office; ordinary people stepping up to help take back our country.

One such patriot is 'fire ball,' Anna Little running for Congress, 6th district, New Jersey. Wow, what a bright, enthusiastic and dynamic conservative candidate. This awesome woman is a go getter. Anna defeated a RINO in the primary. Anna and her energized volunteers have knocked on 40,000 doors. Yes, you read correctly, 40,000. Anna said their goal is to knock on 100,000 doors. How's that for patriotic passion? I was extremely inspired and impressed with Anna Little. Support Anna folks. She is one of us. (annalittleforcongress.com)

I also met a couple of black tea party organizers at the Restoring America rally who are planning tea parties in the black community. I asked both gentlemen, "What brought you to our side?" Both said they compared values; tea party values vs Obama and company. Tea party values won. I'm meeting more and more fellow black patriots who have their heads on straight, choosing values over skin color.

Another Jersey thing; a number of people used the term, "Forget about it!"

So, here is a message from my extremely fired up, passionate and hard working New Jersey tea party patriot brothers and sisters to the democrats come November, "FORGET ABOUT IT!!" 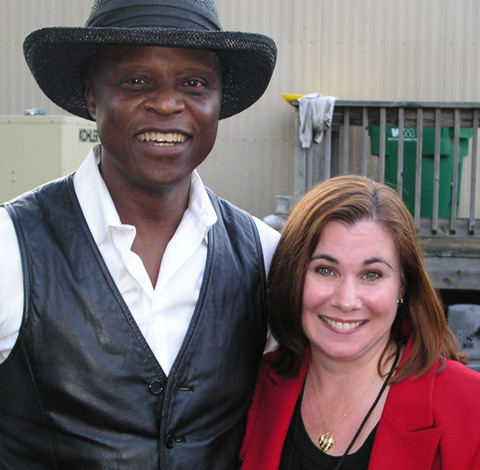