August 8, 2011
Mr. Walter Smith included me in his list of email recipients. Here is an excerpt.

"Does any one know Lloyd Marcus? 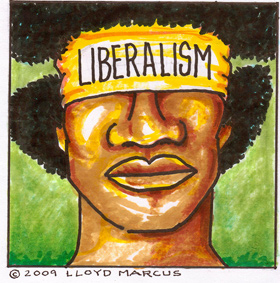 Dear Mr. Smith, I usually delete hate mail from the left. Because your email did not begin with the typical calling me numerous expletives and the "n" word, I will reply.

I find it amazing how blind you are regarding YOUR racism. You call millions of Americans, many who voted for Obama, "obviously anti-Black" because they disapprove of his socialistic agenda. So, because we have a black president, any and all criticism is automatically deemed to be racist. Last time I checked, this is still America, where folks have a right to disagree regardless of a president's skin color.

Good lord, Mr. Smith, not only is this statement absurd, it is evil. You are instructing black Americans not to consider who Obama is as a human being. According to you, Obama's values, principles, and vision for America are irrelevant.

In essence, you are saying Obama's skin color MUST trump EVERYTHING! Can you not see the immorality of such thinking? What if white America followed your lead. "If you do not vote for the white guy, you are voting against all white Americans." Only a white skinhead would make such an idiotic, evil proclamation.

But then, you probably do not consider black racism to be immoral. I suspect you view America's sin of slavery, a ga-zillion years ago, as a gold credit card entitling blacks to limitless acts of racism.

Mr Smith, over 50% of black babies are aborted — which Obama supports via Planned Parenthood. Obama supports gay marriage. Black unemployment has risen to an unprecedented high under Obama.

As a Christian, I believe Obama's agenda does not "jive" with my values. You are insisting that I worship Obama's skin color over my God. I will not.

Good day, Mr Smith. You are in my prayers.