July 17, 2012
In the heat of passion during a radio interview, I said,"The NAACP, Congressional Black Caucus and Democratic Party are more destructive to blacks than the KKK!"

After the radio show, I thought my statement may have been a bit over the top. Upon further thought, I concluded that my statement is true. Before calling me crazy, please hear me out. 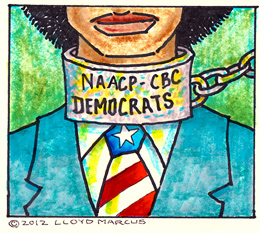 The mission of the KKK is to stifle black liberation via intimidation which is exactly what the modern black civil rights coalition continues to do to blacks. Both organizations despise self-starter, self-reliant and free thinking blacks.

The primary mission of the black civil rights coalition (NAACP/ CBC) and Democratic Party is to keep black Americans believing themselves eternal victims of an eternally racist white America. Many blacks have been successfully indoctrinated into believing every problem in the black community is the result of white oppression.

This is why the black civil rights coalition verbally brutalized black actor/comedian Bill Cosby for suggesting that blacks embrace moral responsibility, hard work and self-reliance to solve problems in their community.

This is also why the black civil rights coalition hates two of the most powerful blacks on the planet; Supreme Court Justice Clarence Thomas and former Secretary of State Condoleezza Rice. Thomas and Rice achieved extraordinary success competing without special concessions or lowered standards due to their race. The KKK shares the black civil rights coalition's disdain for such uppity self-reliant "n------."

As I stated, the mission of the KKK is to suppress blacks. The black civil rights coalition has assisted in the fulfillment of the KKK's mission for decades.

Democratic Party failed-policies supported by the black civil rights coalition have destroyed the black family and sparked epidemic out-of-wedlock births. They have created fatherless black boys who run to gangs in search of male bonding. Blacks are disproportionately represented in prisons, have epidemic high school dropout rates and genocidal levels of black abortions — all due to Democrat led government intrusion.

Yes, monolithic loyal voting for Democrats has truly paid off for blacks. It would be fitting and proper for the KKK to send the black civil rights coalition a "Thank You" card for wreaking such havoc in the black community.

A black man in the White House is the ultimate symbol of America's repentance from her sin of slavery. And yet, to preserve its relevance, the black civil rights coalition strives to convince blacks that race relations have progressed very little since the 1950s. Meanwhile, President Obama is the huge black elephant — or perhaps, I should say donkey — in America's living room proving otherwise.

The NAACP further revealed its true colors when Republican presidential candidate Mitt Romney addressed its members at their convention.

Clearly, this once-great organization, which comprised champions of civil rights, has morphed into a shameful liberal activist hate group. They do not give-a-hoot about real black empowerment. Their mission is solely to advance a far-left, liberal, socialist/progressive and anti-America agenda. The NAACP has sold its soul for a seat at its white liberal massa's table. This disgraceful bunch no longer deserves our respect.

The liberal NAACP audience wanted Romney to give an Obama type speech proclaiming that business owners are rich selfish SOBs! They wanted Romney to vow to punish achievers and redistribute their ill-gotten gain (earnings) to black America. Such a speech would have won Romney a standing ovation.

This is why, as a black conservative, I have disassociated myself from the evil low-rent modern black civil rights coalition. They consistently appeal to black America's lower nature, promoting victimhood-ism, class envy and racial hatred. I refuse to be a part of such a bottom-feeding mindset.

Also, there are grave consequences associated with constantly telling blacks they need lower standards and special concessions to succeed. Such bigotry of low expectations sends a not-so-subliminal message to blacks. The message is blacks are intellectually challenged and inferior. The KKK could not do a better job of negatively impacting the self-esteem of black Americans.

Further insulting blacks is the black civil rights coalition's argument that requiring a photo ID to vote will disenfranchise black voters. In essence, they are saying blacks are too stupid to find their way to acquire a photo ID. http://thehill.com/homenews/administration/237031-holder-pledges-aggressive-fight-against-texas-voter-identification-law

A photo ID is required to board an airplane, cash a check and do a host of other things. But somehow, acquiring a photo ID is too challenging for blacks. It appears the KKK, black civil rights coalition and Democratic Party all agree that blacks are just not as smart as whites.

The black civil rights coalition and the Democrats have a cow when conservative Republicans bring up morality. They are outraged when conservatives suggest that it might be problematic that 73% of black babies are born out of wedlock. http://cnsnews.com/news/article/doj-alum-racial-profiling-hearing-calls-crimes-out-wedlock-births-black-community

I suspect the KKK cheered, "Right on brothers! Right on!"