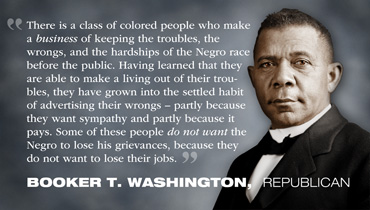 Though skillfully orchestrated to transform convenience store robber Michael Brown into a heroic martyr for civil rights, his funeral was hijacked into becoming a platform for the evil and obscene slander of police and America, perpetrated by the usual deplorable suspects; Al Sharpton, Democrats and the MSM.

Candidly, as a black man, it is easy to feel a little like odd man out; consistently finding myself taking the opposite side than a majority of black Americans. In 2008, over 96% of blacks voted for Obama. I did not.

While I am familiar with black Republican author, orator, and advisor to U.S. Presidents, Booker T. Washington, I only recently came across this amazing quote from him which nailed the Rev. Sharptons and Rev Jacksons of America back in 1911.

"There is a class of colored people who make a business of keeping the troubles, the wrongs, and the hardships of the Negro race before the public. Having learned that they are able to make a living out of their troubles, they have grown into the settled habit of advertising their wrongs – partly because they want sympathy and partly because it pays. Some of these people do not want the Negro to lose his grievances, because they do not want to lose their jobs."

Wow! Booker T. Washington had these low life scoundrels figured out way back then. He perfectly described the shameful despicable exploitation of the goodness of the American people on display at the Michael Brown funeral.

Folks, in a nutshell, the Left's selective outrage over Brown's death is about getting paid and ginning up rage-based black voter turnout for Democrats in November. Apparently, the Democrats and MSM only consider a young black male's life of value when it is taken by a white person. Epidemic black on black shootings only get a yawn from Dems and the MSM while sipping their mocha lattes.

Allow me to offer a few of my numerous anecdotal encounters with police.

In the 1970s, my cousin who lived in a low income neighborhood in Baltimore had a nervous breakdown. He held his two toddler sons hostage in his basement, threatening to kill himself and his kids. Shortly after I arrived on the scene, two white cops responded to my cousin's wife's emergency phone call.

In seconds, the young slim fit cop dashed up the ten front steps into the house. He then waited for his partner's instructions. His much older obese partner moved a bit slower. After negotiating the steps, he waddled to the open basement door.

Upon catching his breath, with wisdom, experience and compassion, the seasoned police officer talked my cousin out of the basement. "C'mon son, I know you're hurtin'. But, you don't wanna do this."

Fearful for my cousin's life, I was extremely relieved. The incident totally contradicted what my militant black college associates said to expect from white "pigs"; shoot the n***** and ask questions later.

On another occasion, my wife and I were surrounded by police cars at a traffic light and ordered out of our car. A bank robbery had just taken place. The perpetrators were an interracial couple driving a car very similar to ours. Mary and I were calm and cooperative. Upon checking us out, the police apologized for the inconvenience and were quickly on their way.

There were other opportunities for an over zealous or racist cop to act like a jerk; it never happened.

Am I saying that bad cops do not exist? Of course, not. Man is a fallen sinful creature. Consequently, bad players show up in every area of the human experience; bad cops, priests, teachers and so on. Jesus had a 12 man crew. One was a bad apple.

I am saying that the Left's narrative that police departments across America are dens of "institutional police brutality" is hogwash; as bogus as their mythical "Republican war on women." Neither are white cops using black boys for target practice. According to FBI stats, out of 12 million yearly arrests, only 400 resulted in fatal shootings; many justified. http://bit.ly/1v2lRIi

Another disgusting aspect of the Left's political exploitation of Brown's death is the cruel crucifixion of Officer Darren Wilson without a trial.

Several years ago, I visited a buddy at work at the police station. He was a black veteran Baltimore City police officer and talented musician; a gentle giant. On the occasion of my visit, he was working lock up. My friend greeted me with his signature big smile and easygoing personality. During my visit, I witnessed his personality fluidly flow between easygoing musician to tough cop mode when dealing with criminals and prisoners.

He later explained that policing 101 requires that you always take control of the situation; less you risk getting caught off guard and stabbed in the back by a suspect's weepy old gray-haired mom or a girlfriend.

People who are second guessing and criticizing Officer Wilson for not tazing or shooting Brown in a non fatal area of his body are just plain clueless.

I wish to offer my sincere heartfelt, thanks, prayers and support to all of our brave men and women who protect and serve us; police, troops, firefighters, veterans and border parole agents. God bless.