As President Clinton's campaign mouthpiece James Carville put it so succinctly in the 1990s, "It's the economy, stupid!" It was true then, it is true now. People may be temporarily seduced by intriguing figures and rosy promises but, bottom line, they still have to support their families and pay their bills. 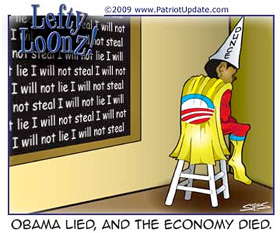 When the novelty of this or that politician has worn off and his or her pie-in-the-sky promises prove just so many hollow words, reality sets in.

I am no economy expert, except for seeing every day that Americans are both depressed and terrified about their rapidly devolving savings and the inflation that has already hit them at the supermarket. The other day, I was visiting my mother in the nursing home she has lived in for the past several years, where at least 75 percent of the employees are African-Americans who heartily voted for Obama. This was a conversation I heard in the elevator.

He: how are you doing?

She: Another day, another dollar.

He: Hey, for me it's another day, another fifty cents.

As I said, I'm not an expert-on-the-economy person, so I will cite those who are, with lots of bullets to emphasize the horror  and Buyer's Remorse  that Americans are now waking up to as they realize that the hope-and-change candidate they voted for in November is just another Socialist-cum-Marxist-cum-Communist whose regime (it's certainly not an administration) threatens to transform America into yet another failed and impoverished Banana Republic. 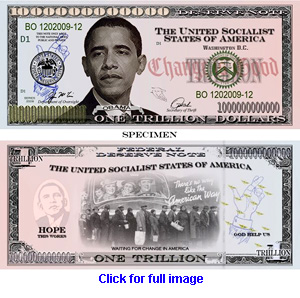 THOSE IN THE KNOW

Martin D. Weiss, Ph.D., an expert in domestic and international financial markets and the bestselling author of The Ultimate Safe Money Guide, has documented the following. We now have:

Weiss lists the bald-faced lies that Obama lackeys have foisted on the American public, including Federal Reserve Chairman Ben Bernanke lying to "60 Minutes" in March that he detected "green shoots" in the economy, Wall Street gurus lying about "the end of the bear market," labor officials lying about "a big turnaround in our nation's job market," California officials lying that they would never default but two days later defaulting on the state's short-term debt obligations to countless vendors and taxpayers and then unilaterally issuing millions of dollars in I.O.U.s that few financial institutions accepted.

Weiss also reports that the following government "help-America" programs have all FAILED!

It's not a pretty picture.

All of which adds up to $71,000,000,000,000 (as in trillion!). In short, the Obama regime has in six short months made the United States the most indebted country in the history of world civilization!

This is "change," economist Dick McDonald writes, that "only an imbecile could love." McDonald (www.riseupamerica.us) has his own laundry list:

As everyone now knows, unemployment is still surging, with many states reporting up to 15 percent to 20 percent of people out of work; consumer confidence is plunging even further; and loan losses are exploding.

Obama's Cap & Tax Bill  which will cost every family $3000/year and force jobs to go to China and India  promises that every American will be TAXED every time they flush their toilets, turn on the lights in their homes, open their refrigerators, and drive their cars  that is the short list! In other words, every single activity of daily living will be monitored electronically for "usage" and then taxed to the hilt. Why? Because the way Socialism works is to tax people to such a Draconian extent that they can no longer afford to "make it" on their own and so must be "taken care of" by Big Government. Yes, the same government that has brought us the utterly FAILED Post Office, Medicare, Medicaid, and Motor Vehicle systems, to name but a few Big Brother debacles.

Then there is the centerpiece of Obama's Socialist dream, to "transform" our healthcare system, the better to "serve" the more-than 300-million people who live in America  including multi-millions of illegal aliens, felons, and other multi-millions who can afford health insurance but "choose" not to buy it.

In his prime-time news conference on July 22  in between trashing the "stupid" Cambridge police department for doing their jobs  Obama admitted that he hadn't read the House version of the healthcare bill. Then he had the nerve to describe a three-card-Monte scheme to pay for it, all the while repeating the urgency of whacking the American people with another $1.5 trillion in debt.

As writer and author Larry Schweikart has chillingly documented, Obama's monstrous "healthcare" bill includes, among hundreds of other horrors:

Why rationing? Betsy McCaughey, former lieutenant governor of New York State, explains that the "$1 trillion to $1.6 trillion health bill, with new taxes and a $500 billion cut to Medicare, will come just as baby boomers turn 65 and increase Medicare enrollment by 30 percent. Less money and more patients will necessitate rationing." It's an "assault against seniors," she says.

After reading the 1,018-page Obama-Pelosi-Reid Bill, orthopedic surgeon Dr. Dave Janda wrote, "it should be clear that the same warning notice must be placed on The ObamaCare Plan as on a pack of cigarettes: Consuming this product will be hazardous to your health."

"If you are over 65." Dr. Janda continues, "or have been recently diagnosed as having an advanced form of cardiac disease or aggressive cancer.....dream on if you think you will get treated. Pick out your coffin. After each American turns 65 years of age, they have to go to a mandated counseling program that is designed to end life sooner."

THE DEFINITION OF INSANITY

As the Executive Director of Traditional Family Coalition, Andrea Lafferty said, "It took President Obama six months to pick a dog for the White House, but he wants Congress to pass a massive health care reform bill in two weeks! This is insane."

But why the escalating opposition to Obama's grand vision? Well, for one thing, Americans are a very smart people, notwithstanding an occasional lapse into a Jimmy Carter or Barack Obama. They "get" the scam of socialized medicine, they see people from Canada and France (in fact, from all over the world) flocking to our shores for treatments that they can't get in their "progressive" systems. And then there is the sticky reality of the non-partisan, putatively objective Congressional Budget Office, whose director Douglas Elmendorf said last week that the White House's health-care proposals would result in a "net increase in the federal budget deficit of $239 billion" over 10 years.

Forthwith, Obama "invited" Mr. Elmendorf to the White House, clearly not for tea and crumpets! Can you just imagine the tongue-lashing this watchdog received, or the threats? It remains to be seen how objective Mr. Elmendorf will be in the coming days and weeks.

There is a growing collective recognition that things simply do not work the way Obama thinks they do. They may in the hothouse at Harvard Law School or in the charade of Chicago politics, or among young, hip bloggers right out of Yale, but not necessarily in the larger American landscape or the real world abroad.

The American people sense this. They assume that what goes up must come down... Americans are waking up to the fact that their president says, promises, and does things that simply do not make sense...

And as an article in Reuters stated about Obama's stimulus package: "The economy is shaping up to be Barack Obama's Katrina. The difference [between Pres. Bush's Katrina and Obama's], of course, is that Katrina afflicted a city and a few states, while the recession afflicts the whole country." 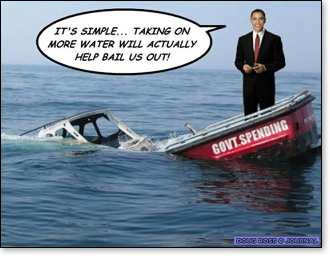 Vice President Joe Biden recently admitted that all the "experts" Americans entrusted with their money "misread how bad the economy was." Leftists like Biden have only a one-solution strategy for the problems they create: throw more money at it! Sure enough, Congressman Steny Hoyer, the second-ranking Democrat in the House, suggested that a second "Stimulus" package may be coming!

But the dirty little secret liberals take great pains to conceal is that their massive spending and taxing is all part of the Left's grand plan to bring big bad America to its knees, annihilate free-market capitalism, widely expand the role of government, and tax people into economic oblivion  all to fulfill their childlike, utopian goal (1) leveling the playing field to the lowest common denominator, and (2) exerting total control over the masses they consider so stupid.

In the last six months, they've seen the light of Socialism at the end of the democracy tunnel they've loathed for decades. But they're not there yet! Americans have now caught on to the scammers and their thug tactics and are pushing back hard.

Note to Obama & Company: We're mad as hell and we're not going to take it anymore!