Filmmaker Andrew Marcus, who hails from Chicago, followed the new media star from the 9/12 Taxpayer March on Washington in 2009, up to the resignation of Rep. Anthony Weiner, whom Breitbart caught tweeting pornographic photos of himself in 2011.

"Every time we thought we were done, something insane would happen and we would say to ourselves: 'How can we possibly claim to be putting out a movie about Breitbart and not include this?'" said Marcus.

"I think what was even more important about that Weiner story – it gets a little bit lost because of the sensationalism of Weiner, there's just a million ways to put that story and make fun of it. But I think the most important thing that happened there was you had a sitting Congressman who singled out someone he knew to be innocent an accused him of a felony, hacking. That was even more outrageous, more corrupt than the original act of essentially internet pornography.

"What was so perfect about that story, and I hope that we conveyed this in the way we presented the film," said Marcus, "is what Andrew was subjected to and what the [TEA party] movement was subjected to and prominent people in the movement were subjected to, this machine attacks them. What they're trying to do is attach memes to people. So, in Andrew's case, the memes were 'heavily edited' [videos], 'racist,' 'liar.'

"The beauty about the Anthony Weiner story was how poetically – you couldn't have written this in a script, people would've thought you were too over-the-top, too fantastic, unbelievable – that Anthony Weiner would draw everybody out to throw the memes at Andrew Breitbart. And it all blew up in their faces," he said. "Why? Because Andrew Breitbart, swimming upstream against that media narrative, had one small thing on his side: the truth." 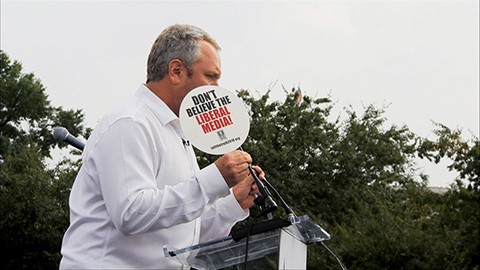 Hollywood veteran Orson Bean is Breitbart's father-in-law and quite funny in recalling his daughter's young beau, and his metamorphosis from liberal to conservative.

In turn, Breitbart honors Bean as a "man of conscience." He says, "Pretty much everything that I do or have done has somehow been polished and/or improved by having the tutelage of Orson, but also by having the – you know – psychological nurturing of Orson over the last 20 years."

Then there's Larry Solov, Breitbart's business partner in all things from websites such as Big Government and Big Hollywood to road trips, motel life, TEA party rallies and street fights. Best friends since childhood, their "biggest falling out" was over fantasy league baseball.

The late Andrew Breitbart made his mark American history and no one saw it coming. Now, as many Americans feel bombarded by government corruption, "Hating Breitbart" is here to revive their zeal for justice in a fun, refreshing way.

Click here for "Hating Breitbart" theater listings. It's available on DVD at HatingBreitbart.com, iTunes and Amazon.