November 13, 2012
On Thursday, November 15, 2012, the Kansas Supreme Court will hold a final hearing in its politically motivated effort to strip former Kansas attorney Phill Kline of his law license.

For those who do not live in Kansas, I ask that you pray for a miracle of justice to clear this good man's name. For those who live in Kansas, I ask that you make the sacrifice in your busy schedules to show up on Thursday at the Supreme Court Building in Topeka, Kansas, at 9 am to stand in solidarity with former Attorney General Phil Kline, who has done NOTHING wrong...legally, morally, or ethically. His decision to discharge the duties of his office and uphold the law has now destroyed him politically. Never in the history of America has the media and courts so villainized and slandered an innocent man. The abortion industry hopes that even the prolife organizations will whisper, "Is it true?" The unequivocal answer is "No." 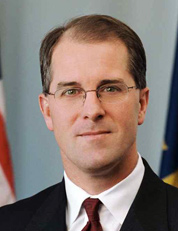 Thursday Kline goes before the Supreme Court of Kansas one final time to plead his innocence. All of the evidence stands in his favor. Despite being cleared of any wrongdoing by two independent, court-appointed judges, the political machine that advocates for the abortion industry, and their friends in the court system, will not rest until they can send headlines around the world that the only prosecutor in our nation's history to investigate and criminally charge Planned Parenthood has been stripped of his ability to practice law. Not insignificant is the fact that five Kansas Supreme Court Justices have recused themselves due to bias. This only happened recently, years after this lynch mob was formed.

What the Disciplinary Board at the direction of the Kansas Supreme Court and the media has done in this trumped up, falsified case against Kline should send a chill down the spine of each one of us. The internal crimes of both Tiller and Planned Parenthood that Kline exposed have been proven and validated by the findings of the Board of Healing Arts and by five judges reviewing the evidence and finding probable cause that crimes had been committed by Tiller and Planned Parenthood. In a world where so few leaders stand on principle, Phill Kline is a sterling example of the price one pays when taking on the evil and corruption of the abortion industry. When it comes to abortion and the aggressive assault to indoctrinate our children and our culture, those in support of the heinous crime of abortion do not just want us all to agree with them or tolerate their views, they want to burn our houses down and then proclaim victory as they stand among the ashes.

It is important that all state legislators, state senators, citizens, and the Kansas governor show up and stand in support of this innocent man. The Supreme Court is counting on mugging Phill Kline in the dark. Please be there to send the message that we see exactly what they are doing.

"Evil has its hour but Truth has eternity."

To send a message of support and prayers to Phill Kline, please email to me and I will get them to him: Giroux.jenn@yahoo.com