Kurt Kondrich
Did Adam and Eve have Down syndrome? 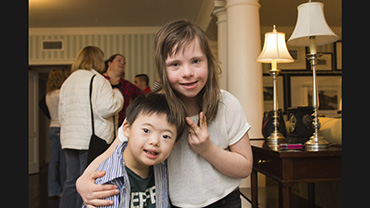 During the month of October we celebrate Down Syndrome Awareness Month, and since the birth of my beautiful daughter Chloe in 2003 I have become very aware of characteristics and behaviors these amazing individuals with an extra chromosome possess. Shortly after Chloe's birth and Down syndrome diagnosis we were told all the things Chloe could not do, and we were fed some very negative information. After our family connected to awesome families and professionals in the field of Early Intervention we soon began to see all the incredible things Chloe could do, and she has planted more positive seeds in 11 years than most human beings do in a lifetime.

When Chloe was born I was a city Police Officer, and I had spent almost 20 years dealing with misguided people trying to hurt and deceive others in our lost culture of death. As I watched Chloe grow and spread her bright Light I have often asked God what I did right to be blessed with such a pure child who will never intentionally hurt anyone and who is not capable of malice or evil. During my career as a Police Officer I never recall an individual with Down syndrome being arrested or sought after for committing a crime, and I have never seen a news story of a person with Down syndrome involved in a heinous act. Chloe and individuals like her are filled with unconditional love, kindness and empathy, and if the world were filled with people with an extra chromosome we would see a dramatic drop and probable ending to crime, hate, war, prejudice and violence. I speak and present frequently to large groups of students, professionals, families and community members, and I tell them if I want to see someone who is disabled, broken and in need of intervention I just go to the mirror. My intervention and cure has been Jesus Christ.

Prior to the fall of mankind and original sin, the first two human beings Adam and Eve walked this earth without shame, anger, hatred or depravity, and their behavior mirrored individuals with Down syndrome. When satan appeared as a serpent and tempted Adam and Eve, is it possible that the devil stole their extra chromosome causing them to fall into sinful behavior which has led to violence, evil and death to be passed down through the human race? My law enforcement mindset has always forced me to focus on facts and truth, and after 11+ years of examining the daily evidence Chloe has presented to me I am convinced more than ever that Adam and Eve did have Down syndrome. It is the primary reason the devil uses the instrument of abortion coupled with prenatal testing and negative cultural perceptions to terminate 90%+ of these priceless individuals who the evil one cannot corrupt. Chloe and individuals with Down syndrome remind our broken human race of the way God intended us to live and treat others, and during Down Syndrome Awareness Month please take time to connect with one of these very special, unique people who give us a glimpse of Eden and our eternal home in Heaven.