May 13, 2013
"One of the most outspoken American fascists was economist Lawrence Dennis. In his 1936 book, The Coming American Fascism, Dennis declared that defenders of '18th-century Americanism' were sure to become 'the laughing stock of their own countrymen' and that the adoption of economic fascism would intensify 'national spirit' and put it behind 'the enterprises of public welfare and social control.' The big stumbling block to the development of economic fascism, Dennis bemoaned, was 'liberal norms of law or constitutional guarantees of private rights.'"

"Certain British intellectuals were perhaps the most smitten of anyone by fascism. George Bernard Shaw (a Fabian Socialist) announced in 1927 that his fellow 'socialists should be delighted to find at last a socialist [Mussolini] who speaks and thinks as responsible rulers do.'[4] He helped form the British Union of Fascists whose 'Outline of the Corporate State,' according to the organization's founder, Sir Oswald Mosley, was 'on the Italian Model.' While visiting England, the American author Ezra Pound declared that Mussolini was 'continuing the task of Thomas Jefferson.'" Economic Fascism, by Thomas J. DiLorenzo

I was involved in the development of the monthly Northwest Connection (www.nw-connection.com), perhaps the finest publication of its kind in the U.S. My wife Helen and I now serve as the 24-page monthly community newspaper's copy editors.

The NWC has progressed, over the past few years, and has produced a network of thoughtful writers who are now consistent contributors.

Our current, May 2013 Vol. 7-Number 76, issue features the lead article "Passage Into America: Our Family's Journey," by Chana B. Cox, of U-Choose Education Forum, Lewis and Clark University Emerita, and author of Liberty: God's Gift to Humanity.

Chana traces her family's history from Poland to the United States, in 1910. I've selected-out some salient facts that have relevance to the current Amnesty/Dream Act controversy.

"In 1910 America was still open to immigration. At 16 Isaac (her uncle) managed to get steerage passage on a ship to New York City, where he, a trained tailor, got a job in a cigar factory. Except for being an avid fan of Enrico Caruso Isaac was a typical, working class immigrant. With his first pay check he began to save his money to bring his younger siblings to America. The brothers came one at a time, each with the understanding that they, too, would save money and bring more family."

"By the early 1920's America had stopped open immigration from places like Poland. In the 1930's the Kessler brothers began to bring their cousins, including my mother and her sister to Montreal, where my mother worked and waited to be legally admitted to the United States on the Polish list. Then Canada closed its doors, and Isaac's extended family managed to get a few more relatives into places like Peru and Argentina before World War II.... All the other family members...died in the Holocaust...."

"We are a nation of immigrants who share a set of core ideas about law, government and individual liberty."

"I believe that most immigrants still come to America for economic opportunity, but now that America has become a European-style welfare state, many may come for welfare benefits.... Reliance on welfare, of one sort or another, has become a preferred way of life here. It is America that is abandoning Americanism."

"We conservatives are totally opposed to illegal immigration in part because it is illegal. If a law is bad, change the law. Rewarding lawlessness undermines the rule of law and is unfair to those who do follow the law."

– those who dream and breathe together – who tell us to "forget" the law have already chosen to disregard and disobey the law, and to aid in the sponsoring of illegality.

Pertinent to Chana's distinction between legal vs. illegal "immigration" is Chris Adamo's renewamerica.com article, May 9, 2013, "Ominous reality behind Obama's dream' of amnesty." Here, I select-out some realities from Adamo's well-reasoned article.

"Last Friday (May 3) Barack Obama spoke to an approving crowd of young Mexicans.... As is his way, seeing an opportunity to demean this nation...he eagerly seized upon it...and (by) his flagrant misrepresentation of hard facts, Obama once again flaunted his disloyalty to the nation he is supposed to represent."

"Similarly, while he offered lip service to the notion of ensuring that 'the laws are upheld....' As a display of sheer fraud and hypocrisy, Obama's statement is hard to surpass."

"For starters, the current immigration system would unarguably reflect American values were it properly enforced by people such as Obama who have sworn an oath to 'uphold the law.' Nor would families be separated if certain of their members had not determined to breach the border in clear violation of the law. And in such cases does it necessarily follow that the responsibility to fix things falls on the nation into which they illegally entered?"

Adamo then asks the most relevant question. "If the character of this nation was truly untenable as Barack Obama was willing to suggest in Mexico City, why would so many members of (his) audience or their countrymen enthusiastically strive to relocate here?" Adamo offers some answers in his article.

In an article written by Brian Lawson of the Huntsville Times, "1.4 million Mexicans waiting to legally immigrate into the U.S., only 65,000 were allowed in."

Lawson begins his July 21, 2011 article, "Many of the complaints about illegal immigration in Alabama center on the unwillingness of millions of immigrants to obey U.S. rules and immigrate legally."

After citing the problems faced by those who seek legal immigration, Lawson states some statistics. "Last year (2010) 1.31 million Mexican citizens were waiting in line for a U.S. work visa or an immigration visa...."

Lawson's article is fairly dealt with. In his concluding paragraph he includes this ironic point. "I don't believe the honest, good guy would be coming here to not get work; he can stay in Mexico and not get work."

In a Human Events article (5/8/2006) "Mexico's Immigration Law: Let's Try it Here at Home," writer Jwaller (sic) tells us that which Obama refuses to share with the American citizenry. "Mexico has a radical idea for a rational immigration policy that most Americans would love. However, Mexican officials haven't been sharing that idea with us as they press our Congress to adopt the McCain-Feingold immigration reform bill."

"That's too bad, because Mexico, which annually deports more illegal aliens than the United States does, has much to teach us about how it handles the immigration issue. Under Mexican law, it is a felony to be an illegal alien in Mexico."

"At a time when our Supreme Court and many politicians seek to bring American law in line with foreign legal norms, it's noteworthy that nobody has argued that the U.S. look at how Mexico deals with immigration.... Mexico has a single streamlined law that ensures that foreign visitors and immigrants are in the country legally; have the means to sustain themselves economically; not destined to be a burden on society; of economic and social benefits to society; of good character and have no criminal records, and (are) contributors to the general well-being of the nation."

The article continues to detail the penalties for illegal immigration into Mexico, and concludes with, "All of the above runs contrary to what Mexican leaders are demanding of the United States. The stark contrast between Mexico's immigration practices versus its American preachings is telling. It gives a clear picture of the Mexican government's agenda: to have a one way immigration relationship with the United States.

Let's imagine that Barack Obama were a Mexican citizen who publicly agitated against the Mexican laws. He would be acting criminally and would be imprisoned for aiding in promoting illegal immigration.

In her article entitled "Mexican Legislator Complains about Arizona's Tough Illegal Immigration Laws," http://www.renewamerica.com/columns/maguire/100807 my wife Helena Isabella Estevez de Guzman, quotes Rep. Leticia Amparano-Gamez, a Mexican official in the state of Sonora, who punctuates that which was written in the Human Events article about the Mexican government's "true agenda." 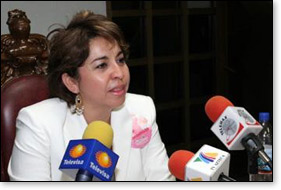 In a radio interview, Rep. Amparano-Gamez asked "How can Arizona pass a law (AZ SB-1070) like this?" She continued that the Mexican state of Sonora is made up mostly of small towns, and, according to the Tucson (AZ) Citizen, the Sonoran official said "The small towns cannot handle the demand for housing, jobs and schools it will face as illegal Mexican workers return to their home towns. Mexico is not prepared for this, for the tremendous problems."

So!? Both Amparano-Gamez and Barack Obama point the finger of guilt at the United States. Mexico should not have to face the "tremendous problems." Those should be the burdens of American citizens and taxpayers.

If you're looking for the perfect example of mendacious chutzpah, it is clearly provided by Barack Obama and Sonora, Mexico Rep. Leticia Amparano-Gamez. Aided by Los que sueñan y respiran juntos – those who dream and breathe together – in the congress of the United States, who laugh at their own countrymen!

We can know with certainty that in politics those visions called dreams are, often, collective, hallucinatory fixations.