February 16, 2009
Hear ye! Hear ye! Judge, Jury and Prosecutor (JJP) Patrick Leahy, Chairman of the Senate Judiciary Committee, wants a "truth commission." Little things like "the truth" rarely concerned the New England demagogue in the past (unless they fit his political dogma). But lo and behold, he's got "religion." Well, sort of.

"Getting even" with election losers is a time-worn tactic best known in the world's most authoritarian regimes or banana republics. But JJP Patrick "Leaky" Leahy (D-Vt.) is sounding the official notice far and wide: You dare to defeat us by winning an election? Just wait 'til we return to power. We'll hunt you down and fix your clock. We'll hound you until you're behind bars. That'll teach you not to mess with us again.

The JJP envisions a "truth commission" with power to subpoena witnesses, in what would surely be a monumental show trial, to investigate a string of Senator Leaky's j'accuse condemnations of the Bush administration. The issues he specifies range from "torture," (the detention of poor picked-on terrorists) and the firing of U.S. attorneys who  BTW  serve at the pleasure of the president.

Well, let's see how interested the Vermont senator really is in ferreting out "truth." Surely, if we're going to go back over the past, and hold a Moscow-style show trial (a circus), we're going to want to unearth all the truth, won't we?

Let us count the ways

So herewith, a modest proposal for a fresh look at disastrous historical events never resolved in such a way as to mete out punishment to their purveyors. Oh, Senator, you said you wanted "truth." And I'm sure your dignified non-partisan temperament would have no problem with unearthing all the truth, right?

When Senator Leahy was vice chairman of the Senate Intelligence Committee, he leaked classified information, including the Reagan administration's plans to topple the Kaddafi regime in Libya, plus information on the Iran-Contra case.

The senator's plea at the time? Ooops! Sorry!

His apology and resignation from the committee hardly qualified as accountability. He was merely sorry for being caught. Censure? That would seem to be 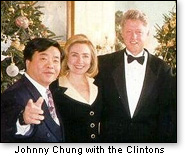 a minimum. Expulsion from the Senate? That should not be off the table, but it was never really explored. Should we not expect real accountability here?

There is the matter of the Clinton administration and Communist China (which regards the U.S. as its "main enemy" and believes war with America is inevitable). President Bill Clinton looked the other way when the Pentagon raised alarm bells over exports of technology to the Chinese  supposedly for civilian purposes. The Pentagon suspected America's licensed largesse was going to China's military machine. But the administration's lax policy was the result of pressures from Clinton campaign contributors at Hughes Aircraft and from Martin Marietta, whose products were authorized for export.

Clinton fundraiser Johnny Chung coordinated the funneling of overseas Chinese money into the Clinton-Gore campaign of 1996, along with substantial campaign cash from Chairman Bernard Schwartz, CEO of Loral  an aerospace corporation. The Clinton administration reorganized bureaucratic authority so as to grant Loral a waiver to transfer ballistic missile guidance technology to China. Truly this was "Tammany Hall politics played out in terms of global strategy," as Reagan Defense Secretary Casper Weinberger labeled it.

It is illegal to take campaign money from any foreign source, let alone a hostile country. At that point, a higher crime is arguably involved. Might not an impartial "truth commission" agree, Senator Leahy?

This column has cited cases where President Clinton: A  refused to take and incarcerate Osama bin Laden when Sudanese sources offered him on a silver platter; B  did not respond in any substantive way to the terrorist bombing of the Khobar Towers in Saudi Arabia that killed 19 Americans; C  appointed people to key cabinet positions whose lax security policies allowed Peter Hong-Yee Lee to steal nuclear secrets to commit espionage on behalf of China and end up serving a mere 12 months in a halfway house.

As stated above, U.S. attorneys serve at the pleasure of the president. But as long as Senator "Leaky" wants to revisit the Bush administration's firing of U.S. attorneys, let's have a real look-see at the real reason for President Clinton's firing of all U.S. attorneys after barely setting foot inside the Oval office. Did "partisan politics" play a role there? Or perhaps a fear that some of them would start digging into the Arkansas scandals that preceded Mr. Clinton's elevation to the White House?

And there never has been a coherent explanation for Clinton's pardon of the fugitive Marc Rich. Given the largesse that Denise Rich bestowed on the Clinton library, surely a "truth commission" might want to determine if Mr. Clinton had reasoned, in the words of ex-Governor Rod Blagojevich, "I've got this thing and its [bleeping] golden. I'm not just giving it up for [bleeping] nothing." Ah, yes, inquiring minds want to know.

It was President Jimmy Carter who in 1979 started the ball rolling on a series of events that led to a world in 2009 where Islamofascist Iran threatens a nuclear holocaust. Carter deliberately betrayed our ally  the Shah of Iran  paving the way for the murderous reign of the radicals who today are developing a nuclear capability and leaving little doubt they intend to use it to destroy our allies and, with help from Russia and China and an assortment of terrorist partners, ultimately the U.S. itself. That was reckless political correctness gone mad. And we today are paying the price.

It was Jimmy Carter who  as a private citizen in 1984  visited the Soviet embassy in Washington and offered his moral support against the supposedly "reckless" policies of his own U.S. president and government. President Ronald Reagan was then in the process of engineering a complex set of moves aimed at the ultimate removal of the Soviet Union as the threat to the world that it had been for decades. This goes beyond naïve political correctness. For a former American president to visit the embassy of an enemy nation and offer sympathy in its battle with a sitting American president  at the very least borders on the "T" word.

How about it, Senator Leahy? Think your "truth commission" should put Jimmy Carter in the dock?

Credible evidence suggests that much of our leadership during and just prior to the Cold War engaged in conduct that was negligent, stupid, outrageous, dangerous, and in some cases arguably criminal. Most of the players in that 45-year drama of the Soviet threat are dead, but surely the time has come for a reckoning with history and thus a fitting subject for a commission that honestly seeks the "truth." This is a war that cost over 100 million lives  with not an inconsiderable amount of bloodshed on the part of Americans who fought mainly in Korea and Vietnam. Certainly, it drained America of much of her treasure.

We could revisit such issues as the Tehran, Yalta, and Potsdam conferences where the U.S.  with a measure of help from Britain  effectively consigned millions of innocent souls behind an Iron Curtain to the mercy of Joseph Stalin  one of history's most psychotic mass murderers.

The Yalta agreement yielded Operation Keelhaul  a tragedy that stands as a metaphor for the failure  or sellout  on the part of much of America's Cold War leadership, where we won the war and lost the peace.

Operation Keelhaul was carried out in northern Italy post World War II by American and British forces (from August of 1946 to May of 1947) to repatriate all Russian citizens who found themselves in the Allied zone to the Soviet Union. This maneuver immediately affected Soviet prisoners of war liberated by the Allies, but also extended to all Eastern European refugees. It included millions of anti-communists and civilians  mainly from the Soviet Union and Yugoslavia. Some of them committed suicide rather than face the Stalinist monstrous nightmare awaiting them.

After the allies assured these people that they would never be turned over to the Soviets, that was precisely their fate. In some cases, the immediate firing squad blasts were within earshot of the allied commanders who  acting on orders from on high  had betrayed the poor souls who trusted them (Yalta, signed by FDR, carried out by Truman).

Julius Epstein, in his book Operation Keelhaul writes, "That our Armed forces should have adopted this as its code name for deporting by brutal force to concentration camp, firing squad, or hangman's noose millions who were already in the lands of freedom, shows how little the high brass thought of their longing to be free."

We could focus on the criminal negligence on the part of those in high places who willfully ignored repeated warnings of Communist infiltration of the U.S. government, where the 20th century's worst disasters were aided and abetted and in some cases plotted. This included the fall of China to the Communists. Today that regime, which holds much of our debt, has for years been engaged in a military buildup far beyond what is required for defensive purposes, and  remember  sees the U.S. as the "main enemy."

One word of caution

Senator Leahy doesn't indicate who would appoint such a high and mighty "truth" commission. To make certain its members are able to do an unbiased job, its members might have to be from another planet. Short of that, choir boys untainted by an embarrassing past that might be unearthed by Rahm Emanuel's opposition "researchers." Also, it might be a good idea to assign to each commission member a bodyguard, lest the Clinton era's notorious secret police seeks to intervene. No one wants another Vince Foster case.

How about it, Senator? Still want the "truth"?

Yes, indeed, Senator Leahy wants a "truth commission?" Fine. Bring it on. The above list is just a bare outline of what a real "truth" commission would revisit. Let the chips fall where they may on both parties  though I submit, far more embarrassingly for Senator Leahy's Democrats. So let the hearings begin. But let them not be confined to Leaky Leahy's small-minded political spitball talking points. Let's do a thorough review, Senator. Surely you would favor a rundown of all the incompetence and venality of varying kinds that led the 20th century from one disaster to another and set us up for the threat of a 21st century that is even bloodier.

Senator, I'm sure you're on board for letting all the truth come out, with no favoritism, no sacred cows, and no political agendas  just the whole truth. Right, Senator? As you said, "We need to read the page before we turn the page." Of course, you would surely favor a comprehensive investigation...Right, Senator Leahy? Senator, are you there?...Hello? Anybody home?