Hussain Al-Hussaini's comments to his therapist suggest there is much he knows about the Oklahoma City bombing that he has not revealed to the authorities — and about which the FBI has avoided asking him. 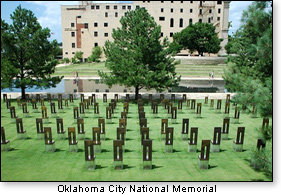 Mr. Al-Hussaini — a onetime member of Saddam Hussein's Iraqi army — is credibly alleged to have been the "Third Terrorist" in that diabolical attack on the Murrah Federal Building that killed 171 innocents on April 19, 1995 — the other two terrorists being Timothy McVeigh (executed) and Terry Nichols (serving time in a super-max security prison in Colorado).

Al-Hussaini is now in pre-trial detention at a Norfolk County Corrections Center in Dedham, Massachusetts, on unrelated charges.

The Norfolk District Attorney's Office tells this column that the detainee is being held pending a trial date for the following:

1 — Mayhem — a felony punishable by not more than 20 years in state prison.

2 — Assault and battery with a dangerous weapon — a felony punishable by not more than 10 years in a house of correction.

The next scheduled meeting in connection with the case is an after-indictment pre-trial conference June 8 — by a spokesman at the Attorney's Office as "not normally an eventful date, normally addressing logistical and scheduling concerns."

At least some law enforcement officials in the Boston area involved in this case are aware of Mr. Al Hussaini's "past." However, nothing on the record suggests that the decision to hold him behind bars without bail was prompted by his role as a mystery man ("John Doe 2") against whom allegations of complicity in the 1995 bombing have been deemed in a court to have been "undisputed."

This column on March 24 opined that under no circumstances should this man be set free. With his background and the cloud under which he lives, he presents a flight risk. As David Schippers — lawyer for Jayna Davis, the original investigative reporter in the case — told us, let the detainee out of jail, and "he'll be gone." It is gratifying that, for whatever reason, the court saw fit to detain him.

As previously reported in this space, Al-Hussaini's arrest March 9 stemmed from the charge that he struck a homeless man during a heated argument at a shelter in Quincy, Mass. The broken beer bottle reportedly seriously injured the victim, possibly adversely affecting his eyesight. Mr. Al-Hussaini reportedly complained to law enforcement officials that the fight resulted from a verbal exchange harking back to his alleged involvement in the Oklahoma City case.

The "files" on alleged "Third Terrorist" 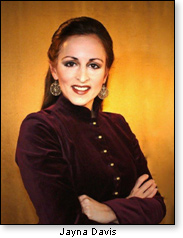 This column has reviewed some files pertaining to therapy that Mr. Al-Hussaini underwent following the 1995 bombing. They likely would remain securely under lock and key today had he not unsuccessfully sued TV reporter Davis for her stories about witnesses linking him to Timothy McVeigh. We here will quote from some of the therapeutic analyses:

11/6/97 — Problem: Depressive Disorder — "Patient called the center this morning to say he was despondent. He also said he had been drinking vodka, and had thoughts about making a bomb, although he did not know how to do this. When I called him, he sounded intoxicated and said that he was very depressed and did not feel he could come here to meet with me....I later learned that he had left the house, had called the police from a pay phone, saying he was suicidal."

Service date 11/10/97: "[Patient] reports the hallucinations only occur at home or on the "T" (the Boston MBTA, a subway/commuter train system). He'll leave the train sometimes out of his concern, and sometimes after his girl friend has fallen asleep, he'll take the car keys and sleep in her car to avoid the police if they were to come to the house. He drinks partly to stop the thinking about these issues.

Service date 11/10/97: "He quit his job at the [Boston Logan] airport stating, "If anything happens there [at the airport], I'll be a suspect." Denied that the current situation with Iraq or the Terry Nichols situation had anything to do with his anxiety."

Prepared 11/10/97: "[Patient] called to quit his job....He fears that if anything happens at the airport, he'll be blamed. He still hears voices on the train home from work, and sees people...from the Oklahoma City bombing on the train."

Service date 11/20/97: "Patient states that he is still hearing voices occasionally... voices tell him he should die."

Service date 11/23/97: "Reports that he [the patient] was hearing voices yesterday, but today they are gone......that he wanted to look for another job because he feels unsafe in the environment he works in, i.e., the [Boston Logan] airport, given the recent events involving his being previously suspected of involvement in the Oklahoma City bombing, which [he claimed] he was completely cleared of."

Therapist comments: "Patient presents with paranoia regarding being the center of attention when he goes for being [center of] attn. re Oklahoma bombing."

Hussain Al-Hussaini fought bitterly to quash the psychiatric records, before a deposition (relevant portions of which are produced herewith). The transcript's Q&A dealt with his lawsuit against KFOR-TV, the station that carried reporter Davis's stories linking him to Timothy McVeigh. Al-Hussaini was questioned by a lawyer for KFOR.

Bear in mind that the witness quit his job at the airport in the fall of 1997, as the above record indicates. The Q&A we cite here took place about a year later in November 1998:

A — I work[ed] at the airport, and if they knew I have such a file in Oklahoma on me — such a file on me, they would terminate me.

A — A lot of things happen at the airport. And I thought — that was my thinking.

Q — So you felt that you would be terminated if people found out?

A — Not necessarily terminate me, but just something else might happen they would point a finger at me.

Q — According to the [therapist's] report, it says that you told them the voices that you heard say "I'm John Doe #2.

Q — Whose voice is it that you are hearing?

A — I don't know. I remember the picture.

A — A lady, she's in Oklahoma City, she lost her babies, two babies.

Q — And it's her voice you're hearing?

Q — Do you know whose voice that you are hearing though?

Q — Is the voice talking to you in Arabic or English.

Q — According to ["the therapist's] report, it also says that you hear Timothy McVeigh all the time, is that true? 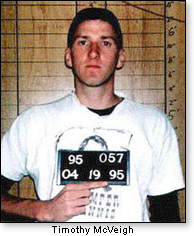 When they convicted and sentenced McVeigh to — to be executed, that's when I start hearing that he is thinking about coming and want me to go with him, to be with him.

Q — You started hearing that Timothy McVeigh wanted you to go with him?

A — He's saying — I hear McVeigh saying, "Why should I be executed by myself? I want you to be executed with me.

Q — Who were you hiding from when you slept in your girlfriend's car?

A — I dream. At night I dream, dream I make a bomb. I wake up in the morning; I call my doctor for that. Sometime I dream people they want to get me, they want to kill me. I have to hide myself. I'm scared at times.

Q — What I'm asking is: who were you hiding from?

A — People from Oklahoma.

Q — Anyone in particular?

Q — The lady you spoke of earlier who lost two kids?

Q — Were you afraid that the authorities, the FBI or the police, were going to come and take you away?

Q — And you're hearing McVeigh's voice talking to you?

A — I don't know, but the picture of McVeigh.

Q — Saying to you, Hussain Al-Hussaini, you have to die.

Q — Do you hear any other voices other than the mother who lost her two children and the voice who could be McVeigh? 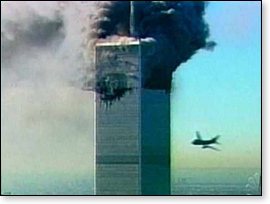 Who knows what Al-Hussaini had in mind when he spoke of being blamed if anything happened at the Boston Logan Airport — which on Sept. 11, 2001, was the point of origin of two of the four flights hijacked for suicide missions under the direction of the now departed Osama bin-Laden?

Where did the alleged "Third Terrorist" get the idea that "something bad" would happen there? Mr. Al-Hussaini, by the way, had been living with two former Iraqi War veterans who were providing food catering services for the commercial airlines at Boston Logan.

President Bush received a daily presidential national intelligence briefing in August 2001 regarding the CIA's preliminary undeveloped intel that bin Laden was planning to hijack commercial flights. They didn't know when, where, or how. One tip of some apprehension on the part of a Logan Airport employee that "something bad" was going to happen there could have led to preventive measures — i.e., increased surveillance and security. At least that's what Jayna Davis's intel sources told her.

Who knows whether a guilty conscience caused Al-Hussaini to hear the voices of the Oklahoma City victims. Or was he merely prescient?

Even given his indicated mental state — as reported by his therapist and arguably displayed by his sometimes rambling paranoia — what is one to make of his imagining McVeigh telling him he should be executed right along with him?

We don't have definitive answers to those questions because the FBI has studiously avoided questioning Hussain Al-Hussaini. The G-men did round up and interview many others — seemingly nearly every young Caucasian male in the Oklahoma City phone book. But somehow the authorities just could not interview this one character whose experiences touched some of the most obvious bases, and who has since been on the loose and only years later is jailed in the Boston area, albeit on totally unrelated charges.

It took a broken beer bottle to get to that point. Strange, indeed.