Wes Vernon
Breitbart's example: get on offense and stay there

March 19, 2012
This column — here, now, and forever — rejects any and all invitations for membership in a Denounce Club. That is...where we are pressured to denounce fellow pro-Americans, a classic divide-and-conquer scenario inscribed in the strategy bible of those who take a dim view of America and Americans in general. 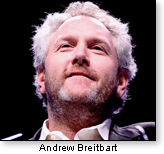 We reference here the Alinskyite tactic of waiting with the utmost patience for any one of our allies to do something foolish and ripe for public ridicule or condemnation. The moment that happens, they pounce on every conservative in sight, demanding that he/she distance himself/herself from the perceived (justly or not) offender.

That "change the subject" tactic comes right out of the rulebook of Saul Alinsky (1909-1972), an apostle of the Frankfurt School philosophy.

Breitbart's primer: how to fight back

Last week (see this column 3/12/12), we focused on the legacy of Andrew Breitbart, the take-no-prisoners conservative activist who brushed aside all attacks, and (as might be caricatured cartoon-style) went straight into the lair of the perpetrators, lifted them by the scruff of the neck, and held them up to the light of pitiless publicity.

Rather than playing de-fense, Breitbart always went on of-fense, knowing that was the only language the opposition left would understand. And how did he come to that conclusion?

The history (boiled down)

The newly awakened investigator from Southern California traced the intellectual and cultural poison that had infected America over the decades. Herewith the timeline:

Karl Marx and Wilhelm Friedrich Hegel paved the way for the Frankfurt School (Germany-California-New York); from there, the toxic gospel reached (often subliminally) the general American public by way of arts-entertainment, education, and other opinion-molding influences — ultimately growing bolder and emerging "in-your-face" during the sixties as the rationale for such flawed nostrums as radical environmentalism, artistic communism, psychological destruction of opponents, and multiculturalism.

But above all, we were assaulted with the crown jewel of the plot: the political correctness of "repressive tolerance." (If the latter sounds like an oxymoron, consider that in the name of tolerance, a nation whose citizens must be soooo careful of what they say is likely on the path to a police state — unless of course, the trend is reversed (and the longer a counter-revolutionary effort takes, the more difficult it is to accomplish).

Battle on your court, not theirs 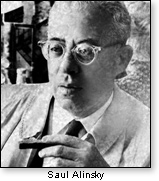 Still, having gone this far, Andrew Breitbart was not yet satisfied that he had discovered all the parts to the conspiracy puzzle. But then he read Saul Alinsky's book Rules for Radicals.

"Pick the target, freeze it, personalize and polarize it," by demonizing it, according to the Alinskyite approach to trench political warfare.

Alinsky believed it does no good to talk about the pros and cons of your target — you must show your target as entirely evil, and yourself entirely good; the "politics of personal destruction" if you will." (Ask Sarah Palin if she has an opinion on that one.)

And here is an Alinskyism for today's headlines:

One of several alternative components to the personal vilification strategy is to remember that "the real action is in the enemy's reaction. If you do a good enough job, you can force them to make a mistake. When they do, you must be ready to exploit it."

The St. Paul of the New Left

When he read Alinsky's Rules for Radicals, Breitbart concluded he had the complete outline of the stealth plan to take down America. He reasoned that if the Frankfurt School's Herbert Marcuse was "the Jesus of the New left," then Alinsky was "his St. Paul, proselytizing and dumbing down Marcuse's message, making it practical, and [also] convincing leaders to make it the official religion of the United States [ignoring the Constitution of our Founders]."

Not to put too fine a point on all this, but Breitbart wrote last year in his best-seller Righteous Indignation that Alinsky's Rules for Radicals "might just as well be titled How to Take Over America from the Inside. It's theory made flesh. Alinsky laid it out step-by-step, but we were too busy fighting the results to read the game plan."

Who is this guy anyway?

We need to know who Saul Alinsky was. Though this column has discussed his doings in the past as a community organizer, Breitbart gives us the best overall summation.

"Alinsky was an avowed communist dedicated to installing communism in America from the inside, using the most clever tactical means he could devise."

In Rules for Radicals, Alinsky pays tribute to "the very first radical... who won his own kingdom — Lucifer." 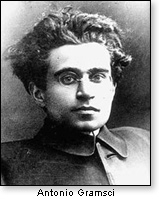 Alinsky believed that the people "are like happy sheep," who must first "be made unhappy," which will lead to passivity, then to discontent, and ultimately to "revolution." That incrementalism was taught at Antonio Gramsci's Frankfurt School.

As Saul Alinsky laid it out, here are some traits of a good community organizer:

1 — Flexibility: Moving from method to method, argument to argument. Work like a guerilla, not a coordinated army.

2 — Confidence: Weak-willed people never win. Do not shy from a conflict. Besides, "power is not only what you have, but what the enemy thinks you have."

4 — Curiosity and irreverence: Values and morals must be questioned. Nothing is sacred. That is "critical theory" at its most basic political form. (Again see last week's column.)

5 — A sense of humor: It is "almost impossible to defend against it." That is a characteristic the original Frankfurt School lacked. Its seriousness made it "boring." Besides, Alinsky concluded, "ridicule is man's most potent weapon." Basically, what we're talking about here is John Stewart vs. Noam Chomsky.

7 — The mere fact that threats are usually more terrifying than the act itself would support the notion that one should "level threats whenever possible."

8 — Find the enemy's most cherished belief, then exploit it against your target. (Example: Gandhi exploiting British civility.)

Back to what Breitbart saw as "the most important and famous of Alinsky's rules": "Pick the target, freeze it, then polarize it." Combine that with the above referenced "moving from method to method," and "from argument to argument." Sound familiar?

In recent days, what started out as an all-out government attack on religious freedom (a pivotal issue that goes to the basics as to what kind of country we are) has spread to raging debates over contraception, a "war on women," and which epithets were nastier than whose. 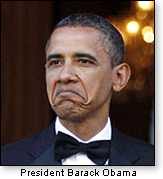 Is anyone surprised that biographer Sanford Horwitt has claimed that President Obama was influenced by Alinsky — both as a community organizer and later as a presidential candidate in 2008?

One marvels at the spectacle of the arsonist who sets the building on fire, then entertains himself by viewing the firefighters battling each other over how best to quell the resulting conflagration, or indeed whether it should be extinguished at all.

There is no better way to honor the legacy of Andrew Breitbart (whose death this month at age 43 left a wife and four small children) than to take the fight directly to those who aim to take down anyone or any group standing in the path of their effort to destroy America. In Breitbart's view, people who trashed America were dirt beneath his feet.

Lift the rocks under which they dwell, and expose, expose, expose. That was Andrew's approach. And it worked all too well for those who would do this country great harm.

Above all, let us not fall for their "change the subject" strategies, as they seek to herd us into a virtual Denounce Club of their creation. Keep the focus on our target — 24/7.