May 19, 2013
"We can and must write in a language which sows among the masses hate, revulsion, and scorn toward those who disagree with us." 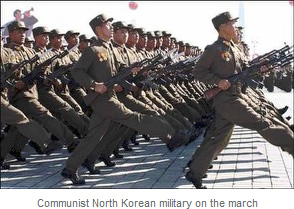 
KRAUTHAMMER: I'm not sure I think so – and I do go back to the 1960s when instead of a fringe protest here and there these radicals took over the universities; they occupy them. They dictated policy. The administrations caved in, the police stayed out. And then they did even something more effective. They realized, well, you know, coming in from the outside is really not going to do much. You get a little attention, publicity. But the left decided late in the 1960s, early in the 1970s, [to begin what was called] 'The March through the Institutions.' They got inside. They did it legally. They did it the right way. They got their Ph.D.s. They got appointments. They got tenure. They kept out conservatives.


Rudi Dutschke, the German student-movement leader, in 1967 reformulated Antonio Gramsci's philosophy of cultural hegemony with the phrase Der lange Marsch durch die Institutionen (The Long March through the Institutions) – an overt war metaphor harkening back to Mao's Long March (1934–35) of the Communist Chinese People's Liberation Army. Democrat Socialists throughout Europe, Russia, South America and here in America used "The Long March through the Institutions," where the working class, through persistence and force, would fabricate their own organic intellectuals and culture (dominant ideology) to replace those imposed by the bourgeoisie.

This bring us to the thesis of this column: America, we are currently living in the tragic aftereffects of the Lenin-Gramsci "Long March through the Institutions." Take, for example, the recent trilogy of scandals now plaguing the Barack Obama administration:
Here, I will focus my analysis on the latter scandal of IRS blacklisting of conservative organizations. Breitbart.com journalist Wynton Hall, in an essential article on the IRS case, wrote about a Marxist/progressive organization called ProPublica founded by radical socialists George Soros and Herbert and Marion Sandler – a group to whom the IRS gave classified tax records of conservative, tea party, Jewish and other GOP-allied organizations.


ProPublica says the documents the IRS gave them were "not supposed to be made public":

The same IRS office that deliberately targeted conservative groups applying for tax-exempt status in the run-up to the 2012 election released nine pending confidential applications of conservative groups to ProPublica late last year. ... In response to a request for the applications for 67 different nonprofits last November, the Cincinnati office of the IRS sent ProPublica applications or documentation for 31 groups. Nine of those applications had not yet been approved – meaning they were not supposed to be made public. (We made six of those public, after redacting their financial information, deeming that they were newsworthy.)

The group says that "no unapproved applications from liberal groups were sent to ProPublica."


Since the 1848 publication of Karl Marx's "The Communist Manifesto," history has repeatedly demonstrated that the Lenin-Gramsci "Long March through the Institutions" is an established Marxist/Socialist tactic and proven philosophical strategy to indoctrinate a comprehensive socialist hegemony throughout society (years before the Dutschke moniker was coined) by systematically deconstructing bourgeoisie capitalist culture and society rooted in Judeo-Christian traditions and by co-opting, taking over and eventually controlling all major societal institutions – not from without via violence and revolution as in Marxist/Socialist revolutions of the past, but within via Fabian Socialism – steadily, quietly, imperceptibly and with Nazi-like efficiency over a long period of time.

Historically speaking, "The Long March through the Institutions" is a cultural hegemony of Eurocommunism that has philosophically deconstructed and transformed all of the social sciences, by infusing activist polices of socialist, liberal and progressive politics throughout America, Europe and the world. The methodical discourse of cultural hegemony is vital to research and synthesis in sociology, political science, anthropology and cultural studies; in education, cultural hegemony devised crucial paradigms, by which the foundation of social and political discontent can be recognized, deconstructed and transformed.

Take a dispassionate view of history; pick any institution in American society and culture from law, religion, education, media, medicine, academia, to politics, journalism, labor, economics, science, business, the arts, modeling, Broadway, Hollywood, and I assure you that over the past 100-160 years all of these institutions have been systematically corrupted and perverted by evolution, atheism, Marxists, socialists, communists, liberals and progressives through their existential "Long March through the Institutions."

Obama as a renowned public figure would not exist if this weren't true.

Will men and women of good will stand up and united fight against this entrenched liberal fascism? Will patriotic Americans stand strong and begin to tear down these tyrannical walls of welfare statism FDR built in the 1930s and '40s; that LBJ expanded in the 1960s and that Barack Obama with Saul Alinsky zeal marched through every American institution throughout the early 21st century?

How Christians, Republicans and conservatives deal with these three big Obama/Democratic Party scandals will determine the answer to these critical questions of modern times ... indeed, for it will dictate our collective future.