October 25, 2013
You'll see the day, ten years from now, when Adolf Hitler will occupy precisely the same position in Germany that Jesus Christ has now. 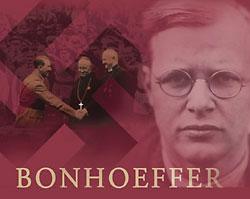 Eric Metaxas in his revelatory book on the great German theologian and martyr Dietrich Bonhoeffer, who on April 9, 1945 was murdered at Flossenbürg concentration camp just three weeks before the Allied Powers defeated Hitler and the Nazis, wrote about "Nazi Theology" in chapter 11 and opened with this passage: "One sometimes hears that Hitler was a Christian. He was certainly not, but neither was he openly anti-Christian, as most of his top lieutenants were. What helped him aggrandize power, he approved of, and what prevented it, he did not. He was utterly pragmatic. In public he often made comments that made him sound pro-church or pro-Christian, but there can be no question that he said these things cynically, for political gain. In private, he possessed an unblemished record of statements against Christianity and Christians."

Hitler demonstrated his utter hatred and contempt of religion when for example he said of Christianity, "It's been our misfortune to have the wrong religion. Why didn't we have the religion of the Japanese, who regard sacrifice for the Fatherland as the highest good? The Mohammedan religion too would have been much more compatible to us than Christianity. Why did it have to be Christianity with its meekness and flabbiness?"

Regarding Hitler's hatred of Christianity, Metaxas further writes, "Hitler's attitude toward Christianity was that it was a great heap of mystical out-of-date nonsense. But what annoyed Hitler was not that it was nonsense, but that it was nonsense that did not help him get ahead. According to Hitler, Christianity preached "meekness and flabbiness," and this was simply not useful to the National Socialist ideology, which preached "ruthlessness and strength." In time, he felt that the churches would change their ideology. He would see to it."

Historically, particularly in the twentieth century, there is ample evidence of tyrants who used some form of socialism, communism or fascism to rule over their nations as a demigod or messiah. In a section titled "A New Nazi Religion" Metaxas explains Hitler's god complex and malignant narcissism, writing that "Since Hitler had no religion other than himself, his opposition to Christianity and the church was less ideological than practical. That was not the case for many leaders of the Third Reich. Alfred Rosenberg, Martin Bormann, Heinrich Himmler, Reinhard Heydrich, and others were bitterly anti-Christian and were ideologically opposed to Christianity, and wanted to replace it with a religion of their own devising." Under Hitler's leadership, William Shirer in his definitive book, "The Rise and Fall of the Third Reich," wrote that "the Nazi regime intended eventually to destroy Christianity in Germany, if it could, and substitute the old paganism of the early tribal Germanic gods and the new paganism of the Nazi extremists."

Alfred Rosenberg, the Nazi Party's chief racial theorist, concocted a diabolical plan whereby the Nazis' would systematically replace Christianity and the churches with Nazi theology. Here are just a few arguments of Rosenberg's program explaining what Hitler was open to approving and, under the pretext of war, would move to establish throughout Germany:


13. The National [Nazi] Church demands immediate cessation of the publishing and dissemination of the Bible in Germany. . . .

14. The National [Nazi] Church declares that to it, and therefore to the German nation, it has been decided that the Fuehrer's Mein Kampf is the greatest of all documents. It . . . not only contains the greatest but it embodies the purest and truest ethics for the present and future life of our nation.

18. The National [Nazi] Church will clear away from its altars all crucifixes, Bibles and pictures of saints.

19. On the altars there must be nothing but Mein Kampf (to the German nation and therefore to God the most sacred book) and to the left of the altar a sword.

30. On the day of its foundation, the Christian Cross must be removed from all churches, cathedrals and chapels . . . and it must be superseded by the only unconquerable symbol, the swastika.


Jewish worship in Nazi Germany was severely destroyed especially after Kristallnacht ("Night of Broken Glass"- Nov. 9-10, 1938) where over 1,000 Jewish synagogues were burned, over 7,000 Jewish businesses were ransacked, burned or destroyed and over 30,000 Jews arrested and sent to concentration camps. Next the Nazis turned their evil plots against the larger Christian Church in German by first co-opting the true Christian church in order to later seek to destroy it from within and martyr as many influential German Christians like Bonhoeffer as possible, therefore the Nazis called this new Nazi church movement, Deutsche Christens, "German Christians." The perversion of Christianity allowed the Nazis to conflate the idea of Germanness with the idea of Christianity, and to further conflate the idea of Germanness as antithetical to the idea of Jewishness which facilitated the Nazi Holocaust against the Jews using Christian phraseology and idioms.

To show the evil intent of how the Nazis systematically perverted Christianity and used it as a cudgel against the Jews and Judaism, for example, Metaxas cited Doris Bergen's book, "Twisted Cross: The German Christian Movement in the Third Reich," writing that "the 'German Christians' preached Christianity as the polar opposite of Judaism, Jesus as the arch anti-Semite, and the cross as the symbol of war against Jews." Fusing the German Volk (people) with the German Kirche (church) meant stretching and twisting the definitions of both. Step one was to define Germanness as inherently in opposition to Jewishness. To make Christianity one with Germanness meant purging it of everything Jewish.... For starters, they decided the Old Testament must go. . ."

Bonhoeffer and hundreds of other courageous German clergy heroically refused to bow to the National Socialism of Hitler and the Nazis; many of them would lose careers, suffer greatly, others giving their lives to uphold the Cross of Christ including: Reinhold Niebuhr, Martin Niemoller, Karl Barth, Eberhard Bethge, Rev. Otto Dibelius, the Bishop of Chichester, George Bell to just name a few. Citing the eternal choice of the human condition, "The question is really Christianity or Germanism?" according to Bonhoeffer, "And the sooner the conflict is revealed in the clear light of day the better."

In the early twenty first century the choice is between Christianity or Progressivism? I echo Bonhoeffer's courageous call for people of faith to always stand strong, uncompromising in the midst of national apostasy and universal heresy during our present political times when instead of "National Socialism" of the Nazis which only lasted 12 years (1933-45), in America we are fighting against an 160+ year Progressive Revolution rule by the Democrat Socialist Party which I date back to the publication of Charles Darwin's pseudo-scientific polemic, "Origin of Species" (1859) an evil book that on a geopolitical level replaced a Judeo-Christian worldview with an evolution atheist worldview.

Historically, there are noted similarities between National Socialism vs. Democrat Socialism – both movements are totalitarian revolutions led by a charismatic, god-like messiah who places himself beyond correction or the rule of law; both use the power of the Leviathan State to amass unconstitutional powers unto themselves for example the Nazis burned down the Reichstag (Parliament) blamed it on the communists and used this power vacuum to eventually combine Hitler's chancellorship with the presidency leading directly to new tyrannical powers Hitler used to launch World War II and establish the Gestapo, the SS, concentration camps and the Holocaust. Also during World War II the American Left under FDR's Executive Order 9066 created dozens of "internment camps" to imprison hundreds of thousands of law-abiding Japanese, Italian and German American citizens without due process and sanctioned by Congress and ruled constitutional by the U.S. Supreme Court in Korematsu v. United States (1938).

Today President Obama freely and arrogantly uses the vast machinery of government to spy on us and punish their enemies both foreign and domestic including using – the NSA, IRS, EPA, Homeland Security, the Justice Department, and for example, HHS to force Obamacare to deconstruct the greatest healthcare program in the world. Both socialist philosophies hate (practicing) Jews, Christians, Catholics, conservatives, tea party members, capitalism, the church, the Bible, a free media, but progressives love to crush all dissenting voices, to systematically deconstruct societal morality by any means necessary.

The Nazis called their comprehensive program to reshape German into its ghastly image, "Nazification." In America I call this existential evolution atheism movement the Progressive Revolution. Finally, both National Socialism/Nazi theology and Democrat Socialism/Progressive theology must and will be defeated because history has repeatedly demonstrated that liberal fascism will always fail because fascism will always collapse upon the weight of its own immorality.