Ellis Washington
Do you know your Constitution? Part 2 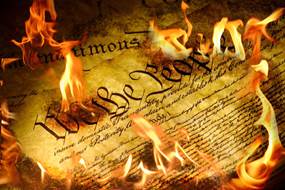 There is no crueler tyranny than that which is perpetuated under the shield of law and in the name of justice.

Dr. Larry Arnn, constitutional scholar and president of Hillsdale College, has instituted a series of public interest programs aired on conservative talk radio called "Constitution Minute." So far there have been nine episodes. Here are parts 5-9:

1. What is bureaucratic despotism?

DR. ARNN: "One of the chief sponsors of the Dodd Frank Finance Reform bill called that legislation, "about as important as it gets, because it deals with every single aspect of our lives." And how does this legislation deal with every aspect of our lives? In the most unconstitutional way: It sets up a board called the Consumer Financial Protection Bureau, which has the power to regulate our economic transactions independently of both the president and Congress – in other words, permanent government employees are placed in charge of us beyond the control of those we elect, the control of "we the people." This is a violation of the representative form of government, without which there can be no Constitutional government."

Historically, the Progressive Revolution under the auspices of the Democrat Socialist Party has shown nothing but utter contempt towards the constitution, natural law, America's sacred traditions, and in this case the separation of powers doctrine that the Framers borrowed from the writings of French philosopher Charles de Montesquieu's The Spirit of Laws (1748). All the political left is concerned about is deconstructing the constitution to amass more political powers unto itself. Excessive regulations since the Theodore Roosevelt's decreeing millions of acres of private land as federal land during his conservation revolution of the early 1900s and FDRs "New Deal" welfare programs of the 1930s and 40s has been an effective way to achieve power over the masses while entrenching liberal fascism into every aspect of our lives. Socialism in America was deceptively simple – control the economics and the courts you control the people and the laws, control the people and the laws and you have absolute power.

2. Is the Constitution relevant today?

DR. ARNN: "Many argue today that the Constitution is outdated because it addresses problems peculiar to the eighteenth century, so long ago. Consider the injunction against titles of nobility in article nine section one of the Constitution. But is that outdated? The purpose of that injunction is to prevent the partisan bestowal of special privileges by the government, which privileges strike at the heart of a free society, which is based on the rule of law. Look at crony capitalism today, so common, whereby the government bestows favors and tax dollars on some businesses and it gives them a leg up over others. This is a striking example of what the Constitution was meant to prohibit and a striking illustration of why the Constitution is not outdated at all."

Laissez-faire or conservative economists oppose crony capitalism equating governmental favors as a perversion of true free market capitalism. Laissez-faire supporters criticize crony capitalism as an ideologically motivated attempt to cast what is in their view the fundamental problem of government intervention or "investments" as an avoidable aberration; free-market advocates refer to governmental favoritism as "crony socialism," "venture socialism" or "corporatism, a modern form of "mercantilism" to emphasize that the only way to run a profitable business in such systems is to have help from corrupt government officials who are open to bribery. Armies of D.C. "lobbyists" lauder hundreds of billions annually to control government legislation in their favor.

3. What is the relationship of the three Branches of Government under the Constitution?

Constitutionally speaking it is both misleading and wrong to ask the question: Which is the most powerful branch of government? Because the original intent of the constitutional Framers placed enumerated powers in each branch that were in their sole domain and from which the other two branches held no power or sovereignty outside the blackletter text of the constitution. However, an existential constitutional crises is precipitated when one branch of government bleeds over into the others' domain. The most infamous example of this is Chief Justice John Marshall's majority opinion in Marbury v. Madison (1803) which created a new doctrine called judicial review whereby the Supreme Court out of whole cloth claimed for itself "the province and the duty... to say what the law is" and made the judiciary, originally the weakest of the three branches of government, into what Jefferson called, "the despotism of an oligarchy [of five]." This judicial tyranny to a large degree caused the collapse of our federalist system of government.

4. Why is Federalism crucial to free government?

DR. ARNN: "Many in Washington today have grown so accustomed to centralized bureaucracy that they think of Federalism as old-fashioned, kind of like fife and drum music. Those who wrote the Constitution saw Federalism as a vital principle of free government in a large republic. The division of power between the Federal government, state governments, and local governments, which serves an important protection against tyranny. The Founders also understood that while the Federal Government is essential for national matters like foreign policy and defense, the governments closer to the people were far better suited to oversee local matters. As we see in the problems that resolve from centralized bureaucracy today, there's nothing out-of-date about the Founders argument for Federalism."

Conservatives must return to doctrines of our political forefathers; we must re-embrace federalism, judicial restraint, and states' rights. The party of Lincoln should protect core civil rights, but beyond that, states and localities should be given as much freedom as they can handle. If California wants to become a socialist hellhole then let it. If Texas wants to become Hong Kong on the Rio Grande, more power to them. And the same principle goes for cities and towns within those states. People will vote with their feet and move to the best states which is why Florida is quickly approaching New York as the most populous state in America – Florida is an island of low taxes and free market dynamism while New York has devolved into a socialist hellhole of collectivist misery.

5. Is the Presidential Oath of Office still relevant?

DR. ARNN: "Members of Congress and federal judges take an oath to the Constitution, but the Constitution prescribes the exact words of the oath only for the President. The American Presidency was a new and powerful office created at the Constitutional Convention of 1787. Nothing like it existed in any other Constitution in history. It was designed to allow certain virtues, decision, activity, secrecy, dispatch, things like that. And they were thought to be essential to executive power especially in a crisis. But despite this immense power, the power is not so powerful as the Constitution itself, that is why President's must pledge to preserve, protect, and defend the Constitution, and why it is the duty of the people to make sure they do so."

Every president, member of Congress, judge and Supreme Court Justice has vowed at pains of impeachment "to protect and defend the constitution against all enemies – foreign and domestic." When was the last time a sitting member of any branch of government was impeached? – Nixon resigned before he was impeached in 1974, Clinton was impeached in 1999 but stayed in office and Florida Federal judge Alcee Hastings was impeached and removed from his judgeship in1989, yet in 1994 launched a successful career as the most impoverished and purveyor of cronyism than any member of Congress. Despite the rampant political corruption in Washington, D.C., there have only been eight [8] federal officials in American history to be impeached and removed from office. Impeachment must become commonplace if we are to save the Republic.

In "Federalist No. 46," James Madison asserted that the states and national government "are in fact but different agents and trustees of the people, constituted with different powers." Alexander Hamilton, writing in "Federalist No. 28," suggested that both levels of government would exercise authority to the citizens' benefit: "If their [the peoples] rights are invaded by either, they can make use of the other as the instrument of redress." I don't believe the states are the servants of the federal government. I believe in Dual federalism which holds that the federal government and the state governments are co-equals, each sovereign.

In conclusion, it is the deception, duplicity and tyranny of the Democrat Socialist Party with their willing lackeys, the RINO, establishment Republicans, who have done great harm to lowering our education level and perverting our understanding of the constitution by dividing and conquering We the People, rather than standing on principle like the Tea Party is attempting to do following the original intent of the constitutional Framers.