February 25, 2015
We are coming to Rome. We will conquer and establish the justice of Shariah. We will use your Leaning Tower of pizza [sic] Pisa to throw off homosexuals.

I will stand with the Muslims should the political winds shift in an ugly direction. 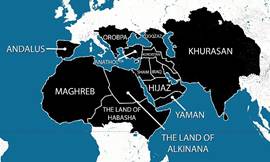 What good is power if those who are entrusted with it are too ignorant, apathetic, or cowardly to use it? The Democrat Socialist Party are used to being in power even when they are constitutionally speaking a minority, that's why Obama struts around the White House like there wasn't a game-changer election on Nov. 4, 2014. Why? Because in Obama's delusional mind he is still El Presidente despite the fact that the Republicans had the biggest political gains since 1929 when President Herbert Hoover was in office. Also just like the duplicitous and cowardly Senate of the decadent Roman Empire, Obama realizes that the Republican-majority Congress in 2015 are completely powerless to stop Obama's rampages against the rule of law and constitutional jurisprudence.

Obama and the Democrat Socialist Party aren't the only entities skillful at wielding power like a medieval mace or a cudgel – Exhibit One: ISIS (300,000 strong, not 30,000 according to the propaganda press) is on the rampage throughout the Middle East and has promised to plant their black flag at the Vatican (Rome) and at the White House (Washington, D.C.). In the meantime Obama is allowing 20,000 illegal aliens (some possibly ISIS jihadists) to flood into America through Texas over the past two months while his corrupt puppet Attorney General, Herr Holder and his Justice Department sues and harasses any Republican Governor who dares to try to protect its own state borders and its citizens, or endeavors to fulfill its sworn duty – "To protect and defend the [state] constitution against all enemies foreign and domestic." Our forefathers would call this TREASON and if we had a real Congress with 535 real men instead of a bunch of empty-suit Quislings, they would have impeached Obama back in 2009 before he completed his first year in office on this constitutional violation of 'executive amnesty' alone!

ISIS Rising: their new map of the Middle East

How did we get the modern map of the Middle East? It is said that none other than the irrepressible Winston Churchill (1874-1965), then a Colonial Secretary in the British Empire in the 1920s who controlled most of the Middle East at that time, is said to have drew the border maps for the Middle East we know today, however, ISIS in 2015 is already redrawing those maps and instead of using a pen as Churchill did... they are using the Blood of Christians, Muslims and religious minorities. Who will stop ISIS Rising?

Why are hundreds of school-age girls from affluent families attending 'Londonistan' prep-schools flocking to Syria and Iraq to become "ISIS Brides" where doubtlessly they will be abused as prostitutes and ISIS sex slaves? I believe that these delusional teenage English girls are morally and spiritually empty; they want their lives to stand for something lasting, with meaning; something people are willing to die for and since Christianity has been taken over by Socialism in England dating back to the 1920s, ISIS fills the void of their longing adolescent souls.

Now ISIS is promising to take over the Vatican and throw all homosexuals from the 'Tower of Pizza' (e.g., 'Leaning Tower of Pisa'). Who will stop the ISIS rampage across the Mediterranean Sea where last week they cut off the heads of 21 Egyptian Christians working in Libya? – President Obama? He says ISIS isn't Muslim, however feminist Muslim writers, Asra Q. Nomani and Hala Arafa, in a revelatory article published in the Daily Beast, Will It Take the End of the World for Obama to Recognize ISIS, cites a noted article by Atlantic journalist Graeme Wood who contends that the Islamic State views itself as "a key agent of the coming Apocalypse." "He is absolutely right, and we have been seeing the symbols for months. After spending about 200 hours combined over the last few weeks, analyzing every word and symbol in the burning video of the Jordanian Air Force pilot and the execution video of the Coptic Christians," writes Nomani and Arafa, "we can tell you that both videos reveal Islamic State strategists, propagandists and recruiters are very much grounded in a logical interpretation of the Quran, the hadith, or sayings and traditions of the prophet Muhammad, and fatwa, or religious rulings."

"They [ISIS] are also hell-bent on one mission," they contend, "Chasing the apocalypse, according to Islamic eschatology – the study of the end of the world." Doing a verbal tap dance around Islamic theology and extremism, even calling it "whatever ideology," writes the authors. "Obama and his policy team have it completely wrong. We have to own the issue of extremist Islamic theology in order to defeat it and remove it from our world. We have to name it to tame it," the authors conclude. If Obama refuses to act because of cowardice or his treasonous complicity with ISIS, then will the Pope and the 5,000 man Italian army defend Rome? Or will the Jordan-Iraq-Saudi Coalition be able to stop the 300,000 ISIS jihadist army spreading across the Middle East like the bubonic plague? Once ISIS establishes a foothold in Europe, the Apocalypse of Revelation has begun and global chaos which will ensue I believe will eclipse the Holocaust of Hitler and the Nazis during World War II and will shroud the world in Shadow and genocide for generations to come.

President Obama, in his three day summit on Countering Violent Extremism (Feb. 18-20), continued to stubbornly ignore the obvious global state of affairs that the West is at war – not against "radical" but devout Islam. Therefore what has the Obama administration ascertained as the real threat if not ISIS and Muslim terrorism supported in thousands of unobserved Mosques in America? According to reports leaked from the Department of Homeland Security, the real danger to U.S. national security isn't ISIS or radical Islamic terror, but "domestic right-wing extremists" (i.e., Christians, conservatives, pro-Israeli Jews, Tea Party supporters, etc.).

Dr. Sebastian Gorka said on "Fox and Friends Weekend" said he couldn't remember an occurrence in the last 20 years when right-wing extremists flew jumbo jets into buildings, set off bombs at a marathon or beheaded 21 Christian hostages. "It really is the most egregious politicization of national security," Gorka stated. "We're going to be looking for right-wing extremists when ISIS prepares to attack us? It's outrageous." "We have tens of thousands of people in the Middle East and elsewhere and here in America who have committed themselves to the destruction of this great nation. And we're going to be focusing on the small cluster of right-wingers here in the United States?" Gorka said. "This could endanger American lives." Gorka stated that this feeds into the Obama administration's propaganda that radical Islamic extremists aren't the real threat, and ISIS and Muslim fanatics need are more jobs and economic opportunities in those countries. "It's hard to believe this is actually happening in America, when people are getting burnt alive in the name of fighting the United States and the West, when we have people being targeted because they're members of a Christian minority."

Historically and politically it is impossible to fully understand the long-term strategies of the existential Progressive Revolution of President Obama and the Democrat Socialist Party unless one recalls the proven tactics and strategies by their precursors – the 1960s radical group, Student for a Democratic Society (SDS) who as Obama and the Democrat Socialist Party's radical Founding Fathers repeatedly warned America – The issue is never the issue, the issue is always the Revolution.

Over 1300 years separates SDS 1960s origins from the ISIS revolution of modern times which literally dates back to the Dark Ages of A.D. 660s as the followers of the prophet Muhammad took Jihad across the Arabian peninsula, throughout the Middle East to Persia (Iran), into Europe, North Africa and now seeks to eventually establish a worldwide caliphate (Islamic government led by a caliph, a successor of the prophet Muhammad and spiritual leader). We see the new ISIS map being written before our very eyes in the blood of Christian martyrs. Every day we witness on our TV sets that ISIS is rising and the Christian world is dying... The question for us is this: Who will stop ISIS from Rising?