Judie Brown
Robert Schindler: We love you and we will miss you! We will never forget you!

There are many pro-life Americans who knew Robert Schindler far better than I, but I doubt there were many who respected him more than I did. As a mother myself, I had long been impressed by he and his lovely wife Mary's undeniable desire to do anything possible to stand between Terri and her ultimate death by starvation. Robert and Mary Schindler were truly examples of heroism above and beyond the call, and now, as Mary grieves the loss of her husband, we all join with her in grieving at the loss of a man who lived his life out of love for his children, his faith and his most deeply felt convictions about the dignity of the human person.

It is with great sadness that we share the news that Bob Schindler, Sr., father of Terri Schindler Schiavo, passed away of a heart attack. I had spoken with him a few times this year, as he had many concerns about the advancing culture of death and the victimization of the vulnerable today. He and his family started the Terri Schindler Schiavo Foundation to fight against the victimization of so many who cannot defend themselves... It is still astounding to me to note that every Associated Press article about Terri Schindler Schiavo either lied or misrepresented what her condition was. She was not on life support. She never had a heart attack or heart condition, and she did not have an eating disorder. She was neglected and abused for years in the nursing homes where her husband/guardian forbade any rehabilitation to be provided for her. She did have a neck injury that prevented her from turning her head fully to one side. The AP never reported that.

Bob tried his best to save the daughter he loved, but the deck was stacked against him, with lawyers, judges and courts pre-determining the outcome of the long fight. Bob and his family suffered untold anguish through the years, as I heard in his voice when I spoke with him. To see the daughter he loved and would care for killed right in front of his eyes! Terri was chosen to be placed in a hospice, though she was not terminal at all. She was dehydrated to death, though she stated she wanted to live. Nurses who cared for her stated she had been able to communicate. She was executed to further an agenda of imposing death on the vulnerable within a hospice. Since that time, there have been many, many similar deaths in hospices reported to Hospice Patients Alliance and other patient advocacy groups.

Today is a sad day for everyone who is dedicated to preventing euthanasia by dehydration. Bob Schindler senior has died...

His daughter Terri was intentionally dehydrated to death, not because she was terminally ill and nearing death, but because she was cognitively disabled and her husband Michael wanted her to die. She died by a slow and horrific form of euthanasia.

The Schindler family and Bob need to be upheld for everything they had done to try to save the life of their daughter and sister Terri. The horrific reality of death by dehydration for those who are not otherwise dying was made known to the world by the courageous Schindler family who were led by their father, Bob.

I ask the question, when did it become acceptable to dehydrate someone to death simply because that person is cognitively disabled?

Bobby Schindler, Robert Schindler's son, who has a personal commitment to helping anyone at risk of being killed by starvation or any act of imposed death, praised his dad with these words: http://www.terrisfight.org/news.php?id=955

I am heartbroken over the loss of my father and yet I know at this moment he is rejoicing with my sister, Terri. My dad was a man of integrity, character and compassion who was blessed with a close and loving family. He taught all three of his children to respect and value life and to love our fellow man.

Even at the height of the battle to save my sister Terri's life, when his patience and temperance was near exhaustion, he managed to display a gentleness of spirit. Yet it was his unfathomable strength that allowed him to shoulder up his own heartache and lead us through our darkest hour.

What greater legacy could a man leave behind?

When I first heard this news on Saturday, I went immediately to a very dear friend, sister in Christ and pro-life leader, Debi Vinnedge, founder of Children of God for Life. www.cogforlife.org Of all our nation's pro-life leaders, she is the one who knew Robert and Mary most intimately. I know this for a fact, as I witnessed their admiration for her during a personal visit to their home after Terri's death. What Debi has written for me to share with you is from the depths of her grief-stricken heart. I pray it touches you as deeply as it has touched me:

We Will Never Forget

Bob Schindler, Sr., was the patriarch of the Schindler family and loving father of Terri Schindler Schiavo. Terri's untimely death on March 31, 2005 in a Pinellas Park, Florida, hospice http://www.heraldtribune.com/apps/pbcs.dll/article?AID=/20050331/NEWS/50331001 left an indelible sorrow in the hearts of millions. Allow me to share with you what I know of this man, who, throughout the years of valiantly trying to save his daughter's life, had become like a father to me. 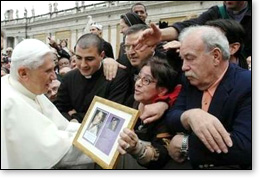 If someone had asked me to paint a symbolic picture of him, it would have to be that of an oak tree. He was strong beyond what any man should have to endure, providing his "shade" of comfort to all who leaned on him. He stood proudly and staunchly, seemingly untouched by the torrential downpour of assaults from all sides.

His quiet, unexpected humor in the darkest moments masked the pain he kept well hidden from the eyes of the press. And when he watched his sweet daughter Terri deteriorating in the final days of her life, still he never wavered. On one such day, his wife, Mary, collapsed helplessly in his arms after her own final visit with Terri, unable to bear any longer the horror she was witnessing as Terri's body gave in to the ravages of dehydration and starvation.

His eyes turned downward, his heart broken, yet his voice never faltered for the press clamoring around him. And despite the needs of his own family, he even had time to hold me as I sobbed. It didn't seem right then  that the father of this dying child should somehow comfort me in my own sorrow, when I should be the strong one comforting him. But Bob took me aside and told me that my own tears for Terri and his family were the greatest comfort he could be given; just knowing that others loved and cared so much was enough for him.

On another occasion, when I had injured my back pretty badly from the endless hours of standing daily in vigil at the hospice, I was unable to be with the Schindlers. It was on that fateful day that Terri's feeding tube was ordered to be removed for the third and final time. From my bed, I helplessly watched the news broadcast  with horror. When I was finally able to return two days later, I sank to the floor in tears once again at Bob's feet, telling him how sorry I was that I couldn't be there when he needed me most. And Bob, in his gentle, fatherly way, held me close, apologizing that I had hurt my back over all this. I was dumbstruck that here I was, with a little back pain, while his daughter lay dying, and yet Bob was concerned about me. Such was his way.

Bob aged rapidly after Terri's death. Unable to save his daughter, he felt he had failed her and the rest of the family. But it was quite the opposite ... Bob taught each and every one of us to remain strong, to never give up hope even after hope was clearly gone. Sometimes he would steal away for a few moments to be away from the crowds, and we would talk about his family ... about how much he loved them ... about how worried he was about Mary  this despite the fact that endless nights of sleeplessness had taken their toll on him.

No, Bob Schindler did not fail Terri. Instead, he helped create a legacy in her honor by founding the Terri Schindler Schiavo Foundation, an organization that has helped thousands of others in similar situations worldwide. Terri will never be forgotten and neither will Bob, who is, at last, at peace with the precious daughter he so loved.

I can well imagine the words he must have heard as he departed this life for a far better place: "Well done, my good and faithful servant... Come, share your Master's joy" (Matthew 25:21).