December 21, 2019
The major, long-term problem of the West is demographic decline. Instead of women averaging 2.1 children apiece, in almost every country, the Total Fertility Rate [TFR] is below 2.1 and falling. The TFRs of advanced countries clearly trend toward oblivion (Table 1): 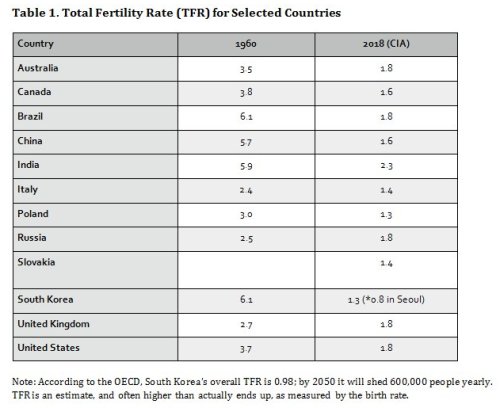 Unlike scares about 'man-made global warming,' the babies crawling on our floors predict the future of our populations with near certainty. Of course, epidemics or immigration can modify the projections of our floor crawlers.

Many factors contribute to this decline. The birth control pill has profoundly changed society. Introduced in 1960, it empowered women to be as sexually reckless as men, and energized the feminist movement, which continues to seek male/female equality in every measure. LGBTism is growing: in the U.S., the percentage of High Schoolers claiming they are LGBT is now at 10% or more, and homosexuals have few children. Young people are encouraged to get higher education, but more education is associated with fewer births. Women have entered the workforce en masse, but career employment is associated with fewer children. Marriages are being delayed, so childbearing is pushed toward older ages, with the result again of fewer births. And abortion is readily available, likewise curtailing births.

Sensible societies see demographic decline and try to reverse it. The Roman Empire passed laws to try to fix its population problems. In 17 B.C. Quintus Macedonicus remarked about a law requiring men to marry and become parents:

"If we could survive without a wife, citizens of Rome, all of us would do without that nuisance; but since nature has so decreed that we cannot manage comfortably with them, nor live in any way without them, we must plan for our lasting preservation rather than for our temporary pleasure." (Livy, Per. 59)


Given the war between the sexes, there's not much sense trying to enact this Roman idea!

Being a parent takes a lot of hard work and sacrifice. This work and sacrifice not only produces children, but generally transforms parents from the adolescent belief that the world revolves around them to considering the needs of their child. Thus parenthood not only gives society a future, but makes parents better citizens.

Can We Make Parenthood More Attractive?

People do things because they copy others they admire, gain benefits (like status, power, or money) or to avoid censure or criminal penalties. We might start by doing things that are 'free' or 'cheap,' but that would add value to becoming a parent. 'Inexpensive' policies are almost always easier to enact.

1. Establish an Internet honor roll of those who create our future.

Post the names of parents and the number of their children on a government website under "Guarantors of [Country Name]'s Future." Public service announcements should be regularly broadcast lauding a random and rotating selection of those who are (or were) married-with-children and listed on the website. When making speeches or public announcements, public officials should regularly praise a few of the honor roll parents. When traveling, those same officials should choose honor roll members from that locality to include in or preface announcements or proclamations. Soon it will become a 'custom,' and parents and their children will look forward to their chance at being so honored.

2. Give preference to parents when hiring government employees.

Those who create our future deserve preferential hiring. Federal, state, and local governments should pass regulation that parents are to be preferred in all hiring. The U.S. has about 2.1 million workers at the federal and 7.4 million workers at the local and state levels. Parents should have a leg up for these ten million jobs. If incentives were also built into the corporate tax structure, parents might have preference to around half the available job openings.

Those married-with-children would play a society-wide lottery, for free. Here's how, with the U.S. as an example. There are about 25 million married U.S. couples with children under age 18 – about 57,000 per congressional district. Each month, one eligible couple per district would be randomly drawn and awarded, say $10,000 tax-free. This would cost approximately $52 million per year for the 5000+ awards distributed across the 435 congressional districts ($104 million if the award were raised to $20,000). For a mere $1 billion, 10 couples/district could be made $20,000 winners per year.

News releases about the winning couples – including how they intend to spend their prize, how the prize affected them and their children – should be regularly released to the press so that families can get 'face time' in the media. This would be a lottery 'untainted' by greed or other moral strictures.

Public honor, government recognition, participation in the lottery, and the potential of media attention should capture the imaginations and hopes of many. Think of the stories about how they were 'on the verge of divorce,' 'facing the loss of their home,' or 'didn't need the money.' Imagine the stories, and perhaps plays and/or movies that the lottery would generate. As a rule, honor is a strong motivator. The honor of being on the official "Guarantors of [country name]'s Future" will motivate some to get married and have children. Garnering public recognition by politicians or winning the lottery should also be a powerful motivator since money and media attention are highly sought.

None of these strategies are very costly in the scope of a national budget, but have the potential to inspire and motivate positive, life-giving and sustaining behavior. It is well past time for us to think 'outside the box' when it comes to facing the demographic nightmare awaiting us.