Christianity follows Moses in positing a conflict between a generative, lifeward – as opposed to a destructive, deathward – force influencing individuals and societies. Marriage and family is lifeward – tending toward a satisfying life and promoting social stability. Homosexuality, more self-centered and rebellious, is deathward – tending toward a life of malignity and social disruption. Christianity is particularly concerned about gays’ sexual use of children, and their being corrupted into homosexuals.

The psychiatric worldview holds people "naturally" gravitate toward self-fulfillment; so following natural impulses is good for them and society. It denies greater molestation by homosexuals. While Christianity counsels societies to suppress individualism in favor of the greater good and nurturing of children, psychiatry seeks fulfillment of clients’ deep desires – even mutilation to approximate the opposite sex if they so fancy.

In 1960, when the birth control pill appeared, the U.S. had a Total Fertility Rate [TFR] above 3. It was weakly-Protestant ("under God" in 1954 and "in God we trust" in 1956 were added as mottos); the three branches of the Federal government were still contesting for primacy, and both abortion and homosexuality were illegal. Perhaps 1-2% of adults claimed regular homosexuality. In 1952 Christine Jorgensen got mutilated to approximate physical aspects of the opposite sex. In the 1960’s some sought to emulate his surgeries, even though such desires were considered "crazy" or "disturbed." Homosexuals were often barred from teaching. Few had heard of "talk therapy," and fewer (~3%) sought coaching to achieve "mental health." In 1964, ostensibly to reduce racism, a new "Civil Rights Act" sharply limited freedom of speech and association.

By 2020, the U.S. was less Christian – with a TFR of 1.7, and heavily influenced by the "mental health" philosophies of talk therapists (who by now had coached or "treated" ~25% of adults). The Supreme Court asserted its dominance over all things sexual – issuing rulings that, in line with mental healthists’ theories and what had now become the Civil Rights Constitution, protected abortion, homosexuality, and the growing fad of transgenderism. Perhaps 6% of adults reported homosexuality and ~2% of high school students claimed to "be" the opposite sex (talk therapists asserted sexual mutilation was a "necessary and healthy choice" if either a child or adult "really wanted it"). (As LGBTQ activist Chai Feldblum noted, "Gays win, Christians lose.")

Every major event can’t be expected to fit any theory perfectly (after all, many forces, individuals, and influences are always in play). But Christianity generally expects events to cluster, evidencing influence by the deathward or lifeward force. Might U.S. states’ attempts to contain Covid19 or the June lootings/rioting following May’s George Floyd killing in Minneapolis and the looting/riot pattern fit the Mosaic/Christian lifeward v. deathward model?

The two parties in the U.S. are the Democrat (which favors abortion and LGBT rights, and whose voters are more apt to be irreligious or atheist), and the Republican (which tends toward opposition to gay rights and abortion and has more religious voters). No state has 60% voting one party, so a large minority of the other party are present, making no state a pure representative of either party. The Christian model would predict that those states with Democrat governors and/or gay rights should tend toward more looting/riots; it would expect Democrat/gay rights states, being deathward, to tend toward lower TFRs and higher Covid19 death rates.

FRI searched Google News for looting and/or rioting on June 9 and 10 and found the cities which recorded at least one instance of looting and/or rioting. Multiple lootings or riots in the same city were not counted in – each city was counted as having had looting/rioting or not. The results are summarized in Table 1. 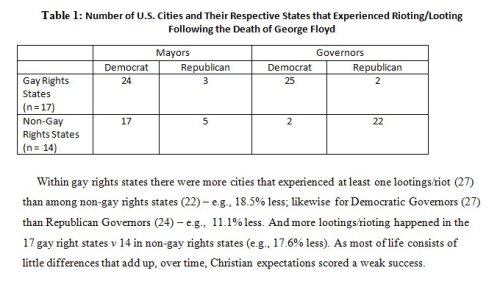 By June 27, almost every state’s death rate had increased and the order from most to least deaths was almost the same. New York registered 160 deaths/100K, New Jersey 169, Connecticut 121, before the same Republican state (Massachusetts) came next with 116. Likewise, Democratic states ranged from 1-169, with a Median of 24.5/deaths/100K; Republican states ranged from 2-116, with a Median of 14 deaths/100K (almost half as much). Thus, people in states with Democratic governors (and almost the same as gay rights states) were more apt to die of Covid19 than those living in states with Republican governors.

Birth rates: The Covid19 death rates inversely tracked state birth rates: The U.S. average TFR was 1.73/woman in 2018 (in 2019 it was 1.7, continuing its slow descent). Ignoring those states with TFRs of 1.73, 14 Democratic states had TFRs below the U.S. average, 6 above; while 5 Republican states had TFRs below and 19 states above the average. Those states providing a higher volume of children (and workers and inventors) for society were generally Republican. The same TFR pattern obtained for gay rights v non-gay rights states. Since a rate of 2.1 is required to keep the population stable, the U.S. is slowly dying, with the Republican (or non-gay rights) states retarding and the Democratic (or gay rights) states accelerating decline.

The Mosaic/Christian perspective on the way of life versus the way of death turned up in states’ birth rates, Covid19 death rates, and the prevalence of looting/rioting following George Floyd’s death – whether indexed by Democratic v. Republican governor or gay rights v. non-gay rights states. None of these comparisons yields a perfect test. But the tests are reasonable, and the data falls toward the traditional perspective. Why would the rulers of the most powerful country in the world go for demographic decline? Albert Einstein’s observation – “Two things are infinite, the universe and human stupidity; and I am not sure about the universe” – might apply.