Because children are its future, who raises them is among society’s most important issues. Tradition claims those with homosexual desires are more apt to sexually molest children and are bad role models. As such, it has sought to keep homosexuals from adopting or fostering and exclude them from child supervision. The mental health associations have asserted that homosexuals are no more apt to molest children, and that gays are "normal" since homosexuality is "healthy."

In 1981, supported by the American Psychological Association and the National Association of Social Workers, David Frater became the first openly homosexual to adopt a child in the U.S. Since then, laws and regulations have been changed to allow homosexuals to foster or adopt. By 2015 perhaps 5% of new UK adoptions were by homosexual couples (Pink News 2/25/2015). As English-speaking countries have similar social welfare policies, and single homosexuals also adopt, currently as many as 10% of foster- and adoptive parents might be homosexual.

Governments often echo mental health associations in claiming that nothing is wrong with LGBTs. But in 2022 the US Health and Human Services stated:

Overall, LGBTQI+ individuals report being in poorer health than non-LGBTQI+ individuals. LGBTQ+ individuals, moreover, are at increased risk for or are particularly affected by certain health conditions, including sexually transmitted infections, Human Immunodeficiency Virus (HIV), obesity, conditions associated with tobacco, alcohol, and other substance use, and mental health conditions, including suicidality. LGB people are more likely to acquire a disability at a younger age than heterosexual individuals. (HHS, April 2)

Obviously, this HHS statement indicates we should avoid placing children with LGBTs. But HHS didn’t address the Christian tradition’s claim that homosexuals are more apt to molest their foster- or adoptive charges. To test this, FRI searched Google News using ‘child sexual abuse’ [CSA] for every U.S. and UK story from 2012-2021 that included the sex of the perpetrator and sex of the victim (also for consecutive ‘runs of stories’ in Canada, Australia & New Zealand). We took every story Google’s algorithm generated when we entered the term "child sexual abuse" and placed that story into a meaningful group. Thus, we did not search for "stepparents," "foster-parents," etc., they were the key part of the story Google gave us – Google did the sampling, we did the grouping. Every story that included "stepparent" or "foster parent," etc. is in Table 1. If a parent was mentioned without any qualifier (as step-parent), we assumed the parent was "biological." Google’s evidence in Table 1 was not based on claims like most social science reports – editors made sure the news organization couldn’t be sued. As such, we can have much more confidence in Table 1’s facts than those generated by respondents to questions – people don’t necessarily tell the "whole truth and nothing but the truth."

Table 1 summarizes those news stories Google found that included biological-, step-, foster-, or adoptive parent molesters. Molestations were categorized as either Ho (homosexual and/or bisexual – those [very few] who molested both sons and daughters were counted Ho) – or Ht (if only opposite-sex kids were molested). Thus, in Table 1’s first row, 18 biological fathers engaged in homosexuality with 49 of their children while 48 fathers molested 67 of their daughters. Likewise, 26 mothers molested 31 of their kids (often along with the father. If both molested a child, it was counted as 0.5 child for each parent [a 5.5 was rounded up to 6 in the Table to avoid "half a kid"]), and 7 molested 6 of their sons (often along with the father). Overall, the molester was usually the father (who most often targeted daughters), while the mothers’ tilt toward homosexuality – often due to joining the father in molesting one or more of their children – is evident. Fathers of all varieties were the most apt to molest. As with biological- and step-mothers, the fewer cases of foster- or adoptive-mother molestations tilted toward homosexuality (often because they joined their partner in molesting a girl or girls). Homosexual perpetrators of all parental varieties tended to have more victims. 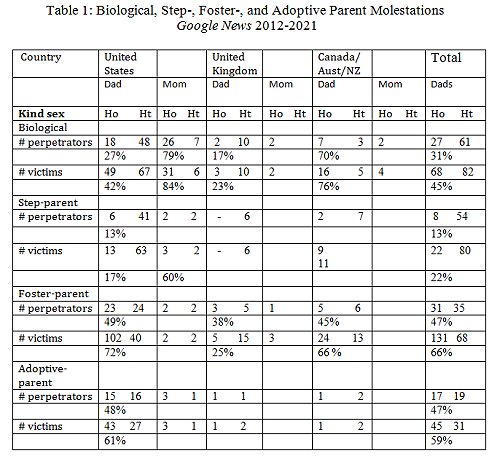 Google found almost as many step-fathers as biological fathers who molested daughters. In comparison, FRI questionnaired a national random sample of 4,340 adults in 1983. Respondents were asked if, while under age 18, they had had sex with various kinds of adults including parents, foster-parents, etc. One biological father was reported as having engaged in homosexuality and two biological fathers and two biological mothers to have engaged in heterosexuality with their children (one man claimed sex with both of his parents). Though divorce was less prevalent, respondents reported homosexual involvement with a step-father and 2 step-mothers; heterosexuality with 4 step-mothers and 18 step-fathers. Thus, while 4 claimed sex with a biological parent (e.g., ~1/1,000), 25 reported it with a step-parent. Unfortunately, we don’t know how many had step-parents in childhood, but the ratio of reported incest with step-parents must have been much higher. Further suggesting remarriage might be associated with incest, sex was also reported with 67 siblings and 15 step-siblings. Only a woman reported sex with a foster-father.[1]

Over the past five decades, mental health associations have proclaimed homosexuals "just as good parents." As bragged about by Pink News (2/25/2015), regulations have been transformed to allow LGBTs to foster and adopt children.

As indexed by news stories, most victims of US molestations by foster and/or adoptive parents from 1980-1994 were girls[2] Google’s assembly of evidence over 2012-2021 in Table 1 is clear: homosexuality, while present in both biological and step-parent families, loomed especially large for foster- and adoptive parents. Indeed, homosexuals accounted for 34 (48%) of Google’s 71 foster-parent and 20 (50%) of its 40 adoptive-parent perpetrators – and most of their victims were boys.

Legislatively, predations by biological or step-parents are already illegal. But allowing homosexuals to foster and adopt has been associated with an increase in the proportion of homosexual molestations by foster- and adoptive parents.[2] Barring those openly homosexual from fostering or adopting children, as tradition calls for, should at least reduce the proportion of homosexually-inclined foster- and adoptive parents and make their charges less subject to sexual predation.