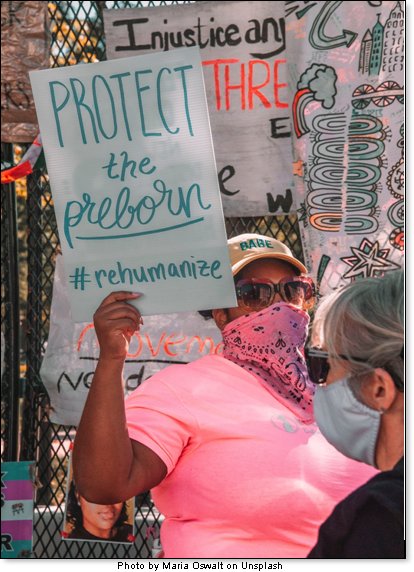 Last week, 48 Democrats voted against the Born-Alive Abortion Survivors Protection Act, which if passed would require doctors to provide medical life-saving care to babies that survive abortion. The bill needed 60 votes for passage and was first introduced by Sen. Ben Sasse (R-Nebraska) in 2015. The bill is not about abortion. It is about saving babies already born as the result of botched abortions.

This is not the first time Senate Democrats derailed the bill that saves the lives of born babies, having voted it down in 2019. Now, they have done it again. The only two Democrats crossing the aisle to vote against this barbarism were Sen. Joe Manchin (D-W.Va.) and Sen. Bob Casey (D-PA). Keep in mind that senators know in advance whether a particular bill will fail. The vote should have been 100  0.

Allowing a baby that survives a botched abortion to die without making every possible attempt to save his or her life is not legal, moral or ethical. It is murder and in my opinion (and I would pray in the opinions of most people) is evil and must stop.

Tragically, the 1973 Roe v. Wade and Doe v. Bolton decisions made it possible for babies to survive abortions because these rulings defined viability up to the moment of birth. Most people are not aware of this. When read together, the Roe and Doe rulings permit abortion after viability for health for all nine months of pregnancy under broad considerations. The language in Doe v. Bolton makes that clear:

When seven U.S. Supreme Court Justicesall mendecided Roe and Doe, the American people had no idea what these decisions meant. They did not know that the rulings would lead to 62 million abortions in the United States so far, partial birth abortions, dismemberment abortions, and killing babies that survive abortions.

When laws are enacted, progressives promote ideas that are based upon re-interpretations of the U.S. Constitution, assumptions at the time that are later disproven or with limited information available. In the abortion decisions, information and knowledge we have today were not available at the time of the rulings.

In this short clip from a C-Span.org discussion on the Roe v. Wade decision, Americans United for Life Senior Counsel Clarke Forsythe explains that in 1973 there was no mention of the word ultrasound in the original Roe opinion, because these tests were not commercially available until several years later. Ultrasounds have made a profound difference in the abortion debate by bringing the images and humanity of the unborn child into public consciousness. Mr. Forsythe mentions that we now know much more about fetology, fetal medicine and fetal development and all of these advancements have changed public opinion. Notably, the second guest is Melissa Murray, a Berkeley law professor who supports legal abortion. Yet, she agrees that the kinds of fetal monitoring and procedures that we have today were unheard of then at the time Roe was decided.

If the seven U.S. Supreme Court Justices that concurred in the Roe and Doe rulings had access to ultrasound technology available today along with advances in fetal medicine, would their opinions have been different? One would hope so. However, despite all this knowledge being available today, Democratic legislators who support radical abortion policies never budge an inch to place reasonable restrictions on baby killing. Rather, they pander to Planned Parenthood and the left by advocating for late-term abortions, ignoring the science.

In 1973, no one would have imagined a future America where saving a babys life after birth would ever be a matter of debate. In our corrupt culture, a babys life is relevant only in relation to the mothers intentions and not the childs autonomy, humanity and inherent right to life. Until Roe v. Wade, it was understood that life is a sacred right written into our Declaration of Independence, and also in Section 1 of the U.S. Constitutions 14th Amendment which says:

No state shall deprive any person of life, liberty, or property, without due process of law; nor deny to any person within its jurisdiction the equal protection of the laws.

Justice Harry Blackmun wrote the Roe decision. He wrote that the fetus is not a person but only potential life, thereby depriving unborn human babies of personhood and protection by the 14th Amendment.

The Cleveland Clinic Health Library published an article, Fetal Development: Stages of Growth. Throughout the article, the fetus is described as a baby 83 times. Here is an excerpt:

At the moment of fertilization, your babys genetic make-up is complete, including its sex. The gender of your baby depends on what sperm fertilizes the egg at the moment of conception.

The Cleveland Clinic is not a pro-life organization, but they sure sound like one. The unborn child may reside inside the mothers body but is not part of the mothers body like her arm or leg, despite what abortion supporters claim.

It would appear there are no limits to what Democrats call reproductive freedom. But what about the freedom for taxpayers? President Biden has already signed numerous executive orders, one of which is to rescind the Mexico City policy. This means that Americans will fund abortion overseas through their taxes, even if they oppose abortion or if it violates their religion or personal morals. That is not freedom of choice.

Jerry Newcombe has it right in his article, Abortion  The Issue that Will Not Die:

Perhaps the biggest reason abortion will never die as an issue is because the truth and science are against the pro-choice position. It is a baby being killed. And everyone knows it.

So while Democrats are on a search and destroy mission against the most pro-life president in U.S. history, Americans should remember that President Donald Trump did everything he could to shut down the horrifying baby-killing businesses, and protect the lives of unborn and born children. Abortion is a euphemism for the heartless cold-blooded killing of innocent human life. This is what progressivism has become. In a normal world nobody would support infanticide. This is not a normal world.