Rev. Mark H. Creech
Stand up, stand up for Jesus

October 6, 2009
In the year 1858, the city of Philadelphia experienced a spiritual awakening that the press called "the work of God in Philadelphia." Churches of every denomination started to burgeon in attendance and thrust upon the scene was a powerful young Episcopalian minister, Dudley Tyng. 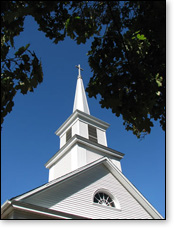 Tyng was the son of a well-known and successful preacher, the Rev. Stephen H. Tyng. After his father's retirement, the young Tyng followed his father as spiritual leader and filling the pulpit at the Church of the Epiphany. But the church was not so enthusiastic about their pastor's replacement. The younger Tyng was more direct and a forceful doctrinal preacher. Moreover, he was most outspoken and uncompromising in his stand against slavery, which offended many long-time members.

Soon there was a grassroots effort to remove the young pastor. Tyng would resign his post as rector and with a small group of friends establish a new congregation called the Church of the Covenant.

Despite their very small beginnings, Tyng's new church would grow quickly. In addition to weekly worship services, Pastor Tyng would also hold meetings for men at the local YMCA during weekday lunch hours. It wasn't long before thousands were coming to hear this fiery young minister calling upon his listeners to live out their faith daily. In one of these meetings, over a thousand men committed their lives to Jesus Christ. And in an attempt to impress those men with the depth of commitment they should always show to Christ, he declared he would rather lose his right arm than ever fall short of faithfully declaring God's word.

Little did Tyng know how prophetic his own words would become. Only a week after his most successful sermon, Tyng was visiting a farm and observing a corn thrasher, when his shirt sleeve got caught between the cogs and his right arm was pulled into the machinery and nearly severed. Physicians did all they could to save the arm, but it became infected and combined with the loss of blood and other complications, Tyng died April 19, 1858.

While friends were gathered around his deathbed, the zealous young minister was asked if he had any last words for family members and friends. Looking upon everyone present, he mustered all his strength to whisper: "Tell them to stand up for Jesus!"

So moved by that touching scene at Tyng's bedside, one of his closest friends and colleagues, Rev. George Duffield, Jr. penned the words of that famous hymn:


Stand Up, stand up for Jesus,
Ye soldiers of the cross;
Lift high His royal banner,
It must not suffer loss:
From victory unto victory
His army shall he lead,
Till every foe is vanquished
and Christ is Lord indeed.
Like Philadelphia was in Tyng's day, America is desperately in need of a spiritual awakening — a genuine "work of God." This generation has confused liberty with license, forgetting that true liberty is being free from the power and dominion of sin. The very ability to remain free from the tyranny of men depends upon a commitment to follow God. James Madison, the father of the American Constitution, said:

"The recovery of moral control and return to spiritual order have become the indispensable condition of human survival. But they can be achieved only by a profound change in the spirit of modern civilization."

This can never happen or be sustained, however, unless strong ministers like that of Tyng are once again thrust upon the scene, preaching forcefully sound Christian doctrine that integrates faith and culture.

Today we hear much from the pulpit about love and tolerance. But one should be careful that tolerance doesn't supplant a firm and righteously indignant resolve against the blasphemy and licentiousness of this age. While this nation believes in "e pluribus unum," a de facto motto meaning "Out of many, one," this country's official motto is "In God We Trust," which recognizes certain eternal verities that must never be breached. While everyone should be concerned about causing offense to his neighbor, everyone should be all the more scrupulous about offending God.

Moreover, love often requires the clashing of swords in defense of the right.

The same apostle John, who wrote so much about love, is the same person who used the imagery of warfare in his writings again and again.

John argued that believers are to overcome the world. He wrote:

Couched in John's epistle of love is the call to a fight — a battle. Heaven is a place for those renewed by Christ from within — overcomers — victors — not defeatist that acquiesce to the liberal notions significantly impacting this nation's public policy and perverting the truth.

Those who won't stand with the Lord now will never stand with him in glory. Heaven is for those who overcome the world by faith and stand up for Jesus.


Stand up, stand up for Jesus
The strife will not be long
This day the noise of battle,
The next the victor's song:
To him that overcometh
A crown of life shall be;
He with the King of glory,
Shall reign eternally.

*****
The author gratefully acknowledges that the story about the life of Rev. Dudley Tyng and the hymn, "Stand Up, Stand Up for Jesus," was drawn from: