Rev. Mark H. Creech
The Nativity: 'where does God fit in?'

December 23, 2011
A school teacher in England tells the story of the time she supervised the construction of a manger scene in the corner of her classroom. It was all there — the wise men and the shepherds, Mary and Joseph, the sheep and the oxen. It fascinated the children, one child especially. The teacher asked this little ten-year-old, "What is it? Why are you so taken with the manger scene? Is there something that bothers you?" With his eyes still glued to the scene, the little fellow asked, "What I'd like to know is: Where does God fit in?" 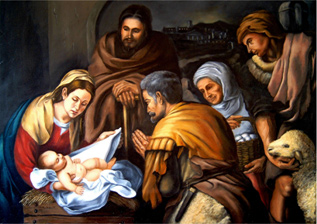 It's amazing how the modest mind of a child can raise a question of such profound import. There is a theological word used to describe where God fits into the story of the Nativity. The word is "incarnation" and it means "being or taking on flesh." In the simplest of terms, the doctrine of the incarnation means the little babe lying in a manger was God Himself, making a personal visit to the earth by robing his divinity in human form.

Today there are many critics of the teaching of the incarnation, each directing its criticisms at different points. Some say the narratives of the Virgin Birth of Christ appear in only two places in the New Testament, Matthew and Luke. They allege the rest of the New Testament is silent on the subject. Others suggest a reference to Deity was just a common way to designate a religious personality in ancient times, which was also evident in the practice of other religions. Finally, some say it just isn't possible.

Nevertheless, the assertion that Jesus is God permeates the Scriptures. The Bible not only teaches that Jesus was born of a virgin. But as a grown man, He exercised the prerogatives of Deity and demonstrated its attributes. Without hesitation, He bore the titles and accepted the worship of Deity. His commandments were given with the authority of Deity.

More importantly, Jesus Himself claimed to be God, teaching His disciples that anyone who had seen Him had seen the Father (John 14:9). Jesus' testimony before the Sanhedrin that He was the Messiah and that they would in the future see Him "sitting on the right hand of power, and coming in the clouds of heaven" was also what clinched His sentence of death (Matthew 26:63-66). The Jewish Council correctly understood His remarks to be a declaration of equality with God and consequently they ordered His execution.

Moreover, we can say with much assurance that the differences between the stories of Jesus' birth and the stories of the births of other religious personalities are so distinct that they are beyond comparison.

Someone once asked the late W. A. Criswell, "If an unwed mother were to avow to you that her child was conceived by the Spirit without an earthly father, would you believe her?" Criswell answered,


"The narrative of the Virgin Birth need not stagger us...If the doctrine of the Virgin Birth is rejected it must be on purely subjective grounds. If one denies the possibility of the supernatural in the experience of human life, it is, of course, easy for him to deny this doctrine. To one who believes that Jesus was human only it would seem comparatively easy to deny the supernatural birth on purely subjective grounds. The preconceptions of thinkers to a great degree determine their views. It would seem that such a wonderful life as lived by Christ, having as it did such a wonderful finish in the resurrection and the ascension, might, indeed should, have a wonderful and extraordinary entrance into the world. The fact that the Virgin Birth is attested by the Scripture, by tradition, by creeds, and that it is in perfect harmony with all the other facts of that wonderful life should be sufficient attestation of its truth." [2]


Still, unfortunately, some persist in their unbelief. Southern Baptist Theological Seminary president, Dr. Albert Mohler, recently noted in Must We Believe in the Virgin Birth?: "Now, even some revisionist evangelicals claim that belief in the Virgin Birth is unnecessary. The meaning of the miracle is enduring, they argue, but the historical truth of the doctrine is not really important." [3]

The doctrine of the incarnation, however, is not that easily dismissed. In fact, the entire structure of the Christian faith is built upon the Virgin Birth and the Deity of Christ. It is essential to the purity of Mary, Jesus' mother. To deny the incarnation is to contend that Mary was adulterous and that the newborn in Bethlehem's manger was illegitimate. It is essential to the Bible's authority. The Virgin Birth is taught in the opening chapters of Genesis, predicted by the Old Testament prophets, affirmed by the Gospel writers, and taught in the epistles. Rejection of the Bible's teaching that Jesus is God undermines the credibility of all its other teachings. Most importantly, it is necessary to salvation's finality. If Jesus were only human, then he couldn't have been sinless. And, if Jesus was not without sin, he couldn't qualify to pay for the world's sin by His substitutionary death on the cross.

Regardless of what some scholars may contend, the doctrine of the incarnation, the Virgin Birth, the Deity of Jesus Christ is absolutely necessary to the entire construct of the Christian religion. Mohler concludes in his article, writing, "This much we know: All those who find salvation will be saved by the atoning work of Jesus the Christ — the virgin born Savior. Anything less than this is just not Christianity, whatever it may call itself. A true Christian will not deny the Virgin Birth." [4]

Mohler is right. The apostle John even made the doctrine of the incarnation a test of fellowship, arguing,


"Many deceivers have gone out into the world; they do not confess the coming of Jesus Christ in the flesh. This is a deceiver and the antichrist. Watch yourselves so that you don't lose what we have worked for, but you may receive a full reward. Anyone who does not remain in the teaching about Christ, but goes beyond it, does not have God. The one who remains in that teaching, this one has both the Father and the Son. If anyone comes to you and does not bring this teaching, do not receive him into your home, and don't say, 'Welcome,' to him; for the one who says, 'Welcome,' to him shares in his evil works" (2 John 7-10).


So, when you look at a Nativity Scene this Christmas, maybe you're like that little boy in the corner of his classroom who was wondering, "Where does God fit in?" The answer is that God was fitted into the body of the baby Jesus. What a glorious and incredible act — God became a man that He might forever dignify what it means to be a human being.

Think of it. We are living in a time when we are dehumanized by the computer age. Our lives are disrupted by national and international affairs over which we have little or no control. We're constantly deceived by false messages and images in the media. Family life is falling apart. The economy is in the tank. All of this strikes at the heart of our self-worth and personal significance. The great question of the 1960s and 70s was "Who am I?" Today, the question is more, "Am I worth anything?"

In the incarnation, God says to each of us, "You are worth so much to me that in Jesus Christ I came to identify with you in all of life's sorrows and struggles. I came to live with you, to save you from your sins so that I could have a personal relationship with you. If you will let me be born into your life, everything will be different — everything will change."

Indeed, it will change. For Jesus is Immanuel, God with us. Better still, Jesus can be God with you. Will you trust Him as your own Savior and Lord?