September 11, 2012
An aspiring politician gave his best shot at a campaign speech. He felt that it was a stirring, fact filled speech. Then the candidate looked out on his audience and asked, "Are there any questions?" That's when someone in the back row called out, "Who else is running?"

That seems to be the sentiment of many Christians when it comes to the nation's choices for President in 2012.

Though the President professes to be a Christian, no President in US history has proposed or worked harder for the advancement of unChristian policies. He is radically pro-choice. With the passage of his Health and Human Services mandate, he has generated an unprecedented attack on religious freedom, requiring Christian and Catholic organizations violate church tenets to provide abortifacients, sterilization and contraceptive services to their employees. He has implemented on every occasion possible the demands of homosexual activism and clarified that he supports same-sex marriage. His economic policies are principally socialistic. He has turned his back on Israel. His preferentialism for Islam is undeniable.

The other candidate, Mitt Romney, is really the lone man standing between America and four more years of President Obama. Romney also professes to be Christian, but is really a Mormon. Though Mormons and Christians share many of the same values, they are worlds apart on essential Christian doctrines. Romney has stated he is pro-life, believes marriage is between a man and a woman, and advocates religious liberty is the first freedom in the Constitution.

Yet Romney leaves room for conservative evangelicals to doubt whether he truly holds their values. He has a clear record of backing various liberal causes during his time as Governor of Massachusetts. When citizens rallied against leftists' attacks on Chick-fil-A for supporting traditional marriage, Romney said the controversy was "not a part of my campaign." Additionally, he has stated he has no intention of trying to reinstate the "Don't Ask and Don't Tell" policy in the military and is opposed to the Boy Scouts' ban on homosexual Scout leaders. His campaign has focused almost exclusively on the economy, taxes, jobs, the deficit, etc. Except for certain short and passionless references, he neglects the social issues.

No wonder a lot of Christians are asking, "Who else is running?" The fact is, however, either Obama or Romney will be the next President. Support for someone from an alternative political party may serve as a conscience vote, but pragmatically speaking will merely aid in putting either the Democrat or Republican nominee in the White House. Consequentially, as Matt Barber of Liberty Counsel Action stated in the Washington Times, Christians have just three real choices this election: (1) choose not to vote, (2) vote for Obama, or (3) vote for Romney.

For serious Christians, option one, choosing not to vote, would be a dereliction of duty as a citizen Christian, a violation of Jesus' command: "Render therefore unto Caesar the things which are Caesar's; and unto God the things that are God's" (Matthew 20:21). Throughout history elections have been won or lost by simply one vote per precinct! Too much is at stake this time not to show up at the polls. The two candidates for President not only have stark policy differences, but whoever wins will likely nominate two Supreme Court Justices. The results of this election could set the nation's course for a generation and beyond.

What is more, the fact Election 2012 is not singularly a Presidential race provides another reason for Christians to vote. There are critical decisions to be made about who will serve in Congress. There are gubernatorial elections, races for state legislatures, and important judicial contests — none of which believers can neglect without creating a vacuum that a sinful and spiritually blind influence will negatively fill.

Moreover, it should be understood, whether voting for President or any other candidate, no politician or political party represents the Christian worldview perfectly. Sometimes the array of contenders provide for less than desirable choices. Nevertheless, Christians should be informed on the issues and vote for the office-seeker whose personal standards, record of public service, campaign pledges and party platform are most consistent with their own Christian convictions. The demand for every follower of Christ is to make one's selection in the voting booth comprehensively — weighing all factors — while applying the judgment of sound biblical principles. 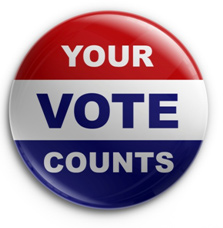 One statistic says there are 60 million committed Christians in America and only 30 million actually vote on any given election. But just think! If 60 million Christians were to vote this election and let the Word of God guide their decision when cast, it would undoubtedly set this nation on a new course of righteousness.

Dissatisfaction with available candidates is never a legitimate excuse not to vote. The better question isn't, "Who else is running?" It is, "Who will be chosen?" Because either by voting or not voting, voting intelligently or unintelligently, voting biblically or not, Christians will still make a choice — for better or for worse.